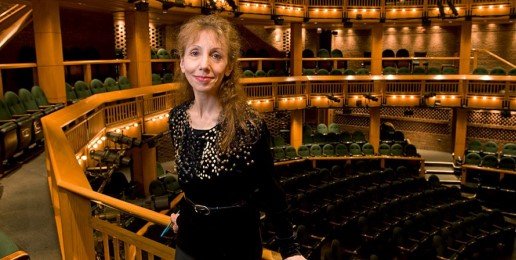 “Progressive” extremists, who are growing in number, volume, and oppressiveness, are managing to divide even “progressives.”

They’re dividing homosexuals from gender-pretenders (i.e., L’s and G’s from T’s) by claiming that anyone who cares about the genitalia of their sexual partners is “transphobic.”

They’re dividing feminists from gender-pretenders by claiming that women must allow objectively male persons in their restrooms, locker rooms, showers, and shelters.

A particularly virulent attack on one long-time Chicago theater critic has revealed the nastiness, intellectual myopia, and fascistic tendencies of actors who have deified themselves as paragons of tolerance, advocates for diversity, and free-thinkers. No joke. They believe that about themselves.

Hedy Weiss, who has been the dance and theater critic for the Chicago Sun Times since 1984, has been accused by Steppenwolf Theatre’s artistic director Anna D. Shapiro and Executive Director David Schmitz of ignorant bigotry in a Steppenwolf Facebook post dripping with histrionics and Leftist bias:

Some of the critical responses from this work have been shocking – not because of the actual critique of the art, but in the way that the responses revealed at best the ignorance of the critic and at worst, a racial bias that, when captured in print, wounded many people of color in this community and their allies, and served as a horrendous reminder of how far we still have to come in terms of racial equity in this community.

We denounce the viewpoints expressed in some of these reviews as they fail to acknowledge the very systemic racism that PASS OVER addresses directly. Particularly egregious are the comments from Sun Times critic Hedy Weiss, whose critical contribution has, once again, revealed a deep seated bigotry and a painful lack of understanding of this country’s historic racism.

Many wonder how Weiss’ deep-seated bigotry and ignorance of this country’s racist history could have escaped the notice of the liberal Sun Times management for over three decades.

What prompted this accusation—a pernicious accusation if false—were these purportedly “wounding” words Weiss wrote about the play Pass Over by Antoinette Nwandu, which uses a Waiting for Godot-like conceit to examine the plight of young black men in Chicago:

But, for all the many and varied causes we know so well, much of the lion’s share of the violence is perpetrated within the community itself. Nwandu’s simplistic, wholly generic characterization of a racist white cop (clearly meant to indict all white cops) is wrong-headed and self-defeating. Just look at news reports about recent shootings (on the lakefront, on the new River Walk, in Woodlawn) and you will see the look of relief when the police arrive on the scene. And the playwright’s final scenes — including a speech by the clueless white aristocrat who appears earlier in the story — and who could not be more condescending to Steppenwolf’s  largely white “liberal” audience — further rob the play of its potential impact.

Yes, these are the “shocking” words that Shapiro and Schmitz believe “wounded people of color and their allies.”

Weiss was making the point that the play offers a simplistic view of the causes of violence in Chicago’s black community by ignoring endemic problems, stereotyping police as racist, and ignoring the indispensable role police play in curbing violence. For that she is deemed an ignorant bigot.

Theaters have a longstanding practice of offering complimentary tickets to critics. Because of Weiss’ alleged racism, a coalition of theaters called Chicago Theater Accountability Coalition (ChiTAC) started a Change.org petition that urges theaters to stop giving complimentary tickets to Weiss. ChiTAC is also reportedly putting the squeeze on other theaters to join this effort to punish Weiss for expressing ideas that hurt the finely tuned feelings of Leftists.

ChiTAC is to the world of theater criticism what Will H. Hays was to the film industry.

Other theaters are going further. According to the Chicago Tribune, “Second City CEO Andrew Alexander on Monday requested the Sun-Times send an alternate theater critic to review its performances,” and Writers Theatre in Glencoe warned, “those who do choose to use language that espouses hate or ignorance will not be invited to attend as guests.” The problem, as conservatives know, is that “progressives” have redefined hate and ignorance to mean “moral or ontological propositions that ‘progressives’ dislike.”

In an open letter to the Goodman Theatre, Chicago actor Bear Bellinger expressed his discomfort with and unwillingness to perform if Weiss is in the audience, saying the theater should provide an understudy to replace him if she were in the audience. Some call this principle. Others call it self-indulgent, self-righteous, petulant “virtue-signaling.”

To put Weiss’ allegedly “racist” words in context, here’s a bit more from her review of Pass Over:

The essential premise of Antoinette Nwandu’s play, “Pass Over,” now in a brilliantly acted world premiere at Steppenwolf Theatre, is unquestionably inspired.

To be sure, no one can argue with the fact that this city (and many others throughout the country) has a problem with the use of deadly police force against African-Americans.

Hill and Parker are such sublime actors — possessed of wonderful physical grace and finely honed tragicomic instincts — that watching them bicker, tease, wrestle, put on Masterpiece Theatre-like British airs, and above all, dream of making it to the “Promised Land” (just as in the Bible story they learned as kids in Sunday school) is like a master class in dramatic interplay. (Parker is particularly charismatic — an actor who can make you hear his brain humming.) And Nwandu has written terrific, alternately playful and heartbreaking dialogue for them.

Does anyone think an actual racist would write those words?

Chicago theater “progressives,” practiced at the art of ferreting out speech that expresses ideas they don’t like, have had Weiss on their radar for some time. The theater community was beside itself with moral outrage when Weiss (aas well as Chicago Tribune theater critic Chris Jones) found fault with the Steppenwolf’s 2015 production of the play for teens titled This is Modern Art for its glorification of graffiti and its inclusion of a tutorial on how to vandalize property and elude authorities.

I lived in New York throughout the 1970s, when graffiti became the medium of protest. I watched as thousands of subway cars, street signs, historic bridges and building walls were defaced — becoming a sort of visual virus that the city could neither control nor afford to erase.

That graffiti (which later surfaced as America’s “gift” to European cities, too) became the most self-destructive marker — a warning sign that a neighborhood was dangerous, infected with crime, on the decline, and a bad place to set up a business. In short, it was a form of grand-scale urban self-inflicted mugging, even if people like Norman Mailer tried to ennoble it. And while you might have been able to pick out a few bits of truly “artful” scrawl, most of the stuff was desecration, pure and simple. And the scourge of graffiti continues: After a recent reconstruction of the Diversey Harbor area, graffiti ruined a beautiful new wall, and the shadows of removed paint still linger.

No amount of classroom discussion will scrub clean the irresponsible ideas promulgated in this play.

It’s an odd moral universe that the theater community has constructed in which homosexuality, transvestism, and public nudity are celebrated while criticism of graffiti is condemned.

Particularly obtuse, deceitful, and/or kooky theater blogger Mark Schreppe, who calls Weiss’ review of Pass Over “vomit-inducing,” accuses Weiss of a whole host of nasty things including “body-shaming” an actress in Weiss’ positive review of a “gender-bending” play in which females played male historical characters. This is the only comment I could find in Weiss’ review that even touches on an actress’ appearance:

That’s it. That description of Simpkins as tall and reed-thin constitutes body-shaming in the rhetorical police state occupied by Leftist language vigilantes.

Schreppe goes on to make this truly baffling comment in reference to Weiss’ review of the play Monster: “Hedy seems unwilling to believe that a young black boy could be talented.” To ascertain the soundness of this charge, you must read the review by Weiss on which this allegation is based (Click here). Trying to find even a hint of justification for the allegation that Weiss is unwilling to believe a young black boy could be talented is like trying to find Waldo in a Richard Scarry book.

Unfortunately, the theater world has long been an insular echo chamber in which deviant ideas and images flourish to the detriment of human flourishing. With this attack on the not-really-conservative Hedy Weiss, it’s clear just how little room there is in the arts for dissenting views of human nature and human flourishing to be expressed. The theater community is a body of believers so thoroughly infected with systemic bigotry that it has no healthy organ of discernment left: no eyes to see, no ears to hear, no mind capable of clear thinking.

For those who love theater, there is a theater company well worth supporting: Provision Theater, whose mission is to produce “works of hope, reconciliation and redemption; works that challenge us to explore a life of meaning and purpose.”