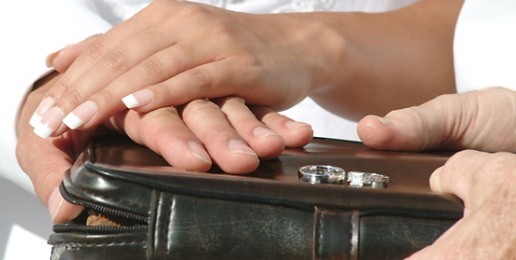 When Marriage Was a Religious Matter and the State Was Out of It
Written By Micah Clark   |   07.23.14
PRINT

From time to time, I hear the claim that “the problem with this whole marriage debate raging across America is all because the state is involved in marriage.”  Some will even claim that the only reasons states created marriage licenses and laws were based upon race.  They seem to think that sometime between the Civil War and 1920 states began to regulate marriage through licenses and laws.  Before this, it was solely a religious matter left to churches, and if we only went back to this, this debate would subside and go away.

Last week, a caller to the Rush Limbaugh Radio Show even said that while she was a lesbian who married her partner, she didn’t like the radical gay rights movement’s effort to unravel marriage. Still, she placed the blame at the government getting involved in marriage and taking it away from churches.  She also claimed that this usurpation had happened in recent US history and was counter to our previous customs.

Marriage is certainly a private matter with religious roots, but it is also a public concern that is of deep interest to government.  Marriage is a special relationship that benefits society and children like no other. This is why government has an interest in advancing and protecting the institution.

Those who hold this notion of government intrusion look to a fictitious history that never really existed.  Government marriage licenses aren’t something that began 100 years ago, or even 150 years ago.  Marriage licenses and laws in America date back 400 years.  We have a marriage license dated May 12, 1621 signed by Governor William Bradford of the Plymouth Colony performed by the local magistrate and published in the town.

The “Charters and Laws of Massachusetts Bay” and “Records of the Colony of New Plymouth in New England” also record various marriage matters. Such things are not easy for us to read in our modern grammar but take note of the government role in each item:

The General Court of Massachusetts Bay passed an act, September 9th, 1639, “for prevention of all unlawful marriages.” which provided :

Henceforth no persons shall be joined in marriage, before the intention of the parties proceeding therein hath been three times published, at some time of publick lecture or town meeting, in both the towns where the parties or either of them do ordinarily reside, or be set up in writing upon some post of their meeting house door in public view, there to stand so as it may be easily read, by the space of fourteen days.

That no person whatsoever in this jurisdiction shall join any persons together in marriage, but the magistrate, or such other as the general court, or court of assistants, shall authorize in such place, where no magistrate is near. Nor shall any join themselves in marriage but before some magistrate or person authorized as aforesaid. Nor shall any magistrate or other person authorized as afore said, join any persons together in marriage, or suffer them to join together in their presence, before the parties to be married have been published according to law.’

“In an act passed June 4, 1645, the General Court defined a lawful contract of marriage (preliminary to the marriage itself) to be u the mutuall consent of two parties w th the consent of parents or guardians (if any there be to be had) and a solemme promise of marriage in due tyme to eich other before two competent witnesses.”

Note: Other acts provided for the registration of marriages, etc., with the town clerk, – a provision continued in the laws of New Jersey to this day

(As you can see by the footnote, the phrase “to this day” is  a reference to this state marriage law’s existence from 1645 through the book’s publication date of 1856.)

One of the common notations often seen in early laws was the requirement that marriages must be in harmony with the Bible. (There was no question about same-sex marriage back then.)  Take for instance, this from William Penn and the “Charter of Liberties of the Providence of Pennsylvania,” and later passed by the Pennsylvania legislature.

In the Frame of Government or Charter of Liberties of the Province of Pennsylvania, dated April n, 16S2, by William Penn, with alterations agreed upon in England, it was provided :
—
Nineteenth. That all marriages (not forbidden by the law of God, as to nearness of blood and affinity by marriage) shall be encouraged; but the parents or guardians shall be first consulted, and the marriage shall be published before it be solemnized, and it shall be solemnized by taking one another as husband and wife, before credible witnesses, and a certificate of the whole, under the hands of parties and witnesses, shall be brought to the proper register of that county, and shall be registered in his office.

There are also many examples of marriage laws in the original thirteen colonies’ state legislatures during the founding era.   One, which was deemed so well written and thoroughly debated, that it remained unchanged on the law books for over 75 years, was New Jersey’s “act to prevent clandestine marriages.”  Enacted in 1719, note also it’s respect for the nuclear family in its opening clause of intent:

Sect. 1.  WHEREAS of late Years several Young Persons have been, by the Wicked Practices of evil disposed Persons, and their Confederates, inticed, inveigled and deluded, led away and Clandestinely Married, which has often been to the Ruin of the Parties so Married, as well as the great Grief of their Parents and Relations.    In order therefore to prevent the like as much as may be, for the future; Be it Enacted by the Governor, Council and General Assembly of this Province, and it is hereby Enacted by the Authority of the same, That from and after the Publication of this Act, no License shall be given to Marry any Person under the Age of One and Twenty Years, until such Person have had the Consent of his • or her Parent or Parents, Guardian or Guardians, or Person or Persons under whose Care and Government he or she shall be, signified by a Certificate in Writing, under the hand of the Parent or Parents, Guardian or Guardians, of him and her intended to be Married ; or in case any the said Persons intending to be Married have no Parent or Guardian, then by a Certificate in Writing under the hand of the Person or Persons under whose Care and Government the said Person intending to be Married, at that time, shall be ; which Certificate shall be filed in the Secretary’s Office of this Province, and Registered in a Book to be kept for that Purpose; for doing of which it shall be lawful for the Secretary of this Province, or his lawful Deputy, to receive the Sum of TJiree Shillings as a Fee or Reward.

Suffice it to say, the notion that our battle surrounding the unraveling of marriage in America today is due to a recent involvement of the heavy hand of government in the licensing, or regulating of marriage, is simply a canard often advanced by those who (knowingly or not) call for an unprecedented marital anarchy that ignores the public good which natural marriage provides for societies.