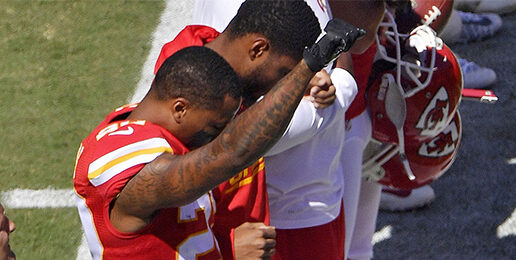 In a cowardly effort to lick the jackboots of Black Lives Matter, the NFL is reportedly going to have every NFL game during Week 1 open with the song “Lift Ev’ry Voice and Sing,” long known as the “black national anthem,” followed by the American national anthem, the “Star-Spangled Banner.” According to the Associated Press, the NFL is also “considering putting names of victims of police brutality on helmet decals or jersey patches.” (Maybe the NFL wants to tackle another serious societal problem and allow players to put the names of victims of domestic abuse committed by professional athletes on their helmets or jerseys. #LogInTheirEye)

African American James Weldon Johnson wrote the lyrics to “Lift Ev’ry Voice and Sing” in 1899, and his brother John Rosamund Johnson composed the music. It was first performed by 500 black students at a segregated school on the occasion of Abraham Lincoln‘s birthday. In 1919, the NAACP adopted it as their official song. It is a moving and inspiring hymn to God, deeply meaningful to the black community. But is it an appropriate song for sporting events that bring together diverse peoples from all over the world for some diversionary entertainment?

Is a song that emerged from and reminds listeners of the most grievous historical sin of this great country a fitting song to start an event that is intended to entertain? And why now? Why when racial discrimination is at historic lows should we use sporting events for this purpose? When slavery and Jim Crow laws are long gone; when we have had a black president; when we have black congressmen and congresswomen; when we have blacks serving and performing at the highest levels of every institution and profession in the country; and when we have interracial children, families, churches, and friend groups, why begin a diversionary bit of entertainment with a song about the “blood of the slaughtered” blacks killed by whites?

Sin and injustice mar the story of every country and institution that has ever existed because sin is the state of man. But America has been a marvel in the annals of history as a place in which racial, ethnic, and religious diversity can flourish. That’s why emigrants from around the world continue to come.

Our national anthem should be one like the third verse of “Lift Ev’ry Voice and Sing” (a verse that leftists likely detest) that places God first in leading us to a better place—a place in which we judge people by the content of their character rather than the color of their skin. It should express the foundational principle that we are all created by God and endowed by Him with unalienable rights and that out of many, we become one as American citizens. I’d say this does the job quite nicely:

If the NFL pursues this controversial political act—an act which will result in yet more lost revenue—let’s pray the third verse of “Lift Ev’ry Voice and Sing” is sung to Lord:

God of our weary years
God of our silent tears
Thou who has brought us thus far on the way
Thou who has by Thy might
Led us into the light
Keep us forever in the path, we pray
Lest our feet stray from the places, our God, where we met Thee
Lest, our hearts drunk with the wine of the world, we forget Thee
Shadowed beneath Thy hand
May we forever stand
True to our God
True to our native land