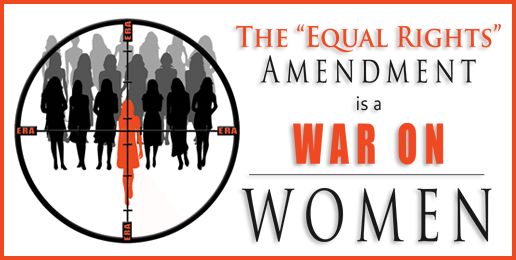 No one is opposed to “equal rights,” but that’s not what the ERA is about.

“Equality of rights under law shall not be denied or abridged by the United States or any state on account of sex. The Congress shall have the power to enforce by appropriate legislation the provisions of this article. This Amendment shall take effect two years after the date of ratification.”[Emphasis added)

The ERA will remove all legal distinctions between sexes.

In other words, all federal, state and local laws, policies and regulations favoring either males or females would be unconstitutional under ERA. Laws including marriage, divorce, family-property law, child custody, adoptions, abortions, alimony, some criminal laws, age limits for marriage and the age of consent, public and private schools, prison regulations, and insurance rates, veterans benefits, boy and girl scouts, tax exemptions for single-sex schools would be challenged if ERA is passed.

The ERA and the War on Women [Brochure]

The Far Reaching Effects of the ERA

Equal Rights Amendment and the War on Women by Laurie Higgins

The Resurrected ERA Must be Defeated by Laurie Higgins