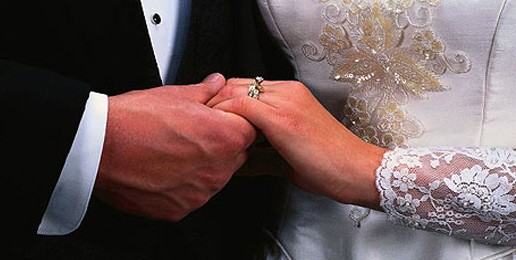 The mainstream media, including it seems virtually every political pundit on the Left and the Right, are dancing a jig over the “inevitability” of the widespread cultural embrace of a queer (pun intended) revision of marriage. These pundits, who jigged their way all over the Sunday morning news programs, pointed to the support among a troubling number of Republican “leaders” (aka followers) and youth—always known for their wisdom, maturity, and sexual restraint—as justification for their confident prognostications.

I watched four of these programs and was struck that on the issue of marriage, our whip-smart pundits are wholly ignorant.  Not one interviewer asked these esteemed pundits what marriage is, or why the government is involved with marriage, or if children have any inherent rights regarding their biological parents, or why marriage should be limited to two people if it has no inherent connection to sexual complementarity or reproductive potential. When the comparison of bans on interracial marriage to bans on the legal recognition of same-sex unions as “marriage” were alluded to, no pundit asked “In what specific ways is homosexuality analogous to race?”

Their “reasons” for their joyous jigging over the “inevitable” radical transmogrification of civil marriage are that Republicans like Senator Rob Portman (R-OH) and young people support it. What the pundits didn’t discuss is either the recent and huge Reuters poll (24, 455 people polled) that was conducted between Jan. 1 – Mar.14 that showed that only 41 percent of Americans support same-sex “marriage.“  That’s remarkable considering the fact that the mainstream press, Hollywood, Broadway, and our public schools—which is to say, our culture-making institutions—are in the tank for all things homosexual, including same-sex “marriage.”

What the pundits also didn’t discuss, however, is that not all of our young people support the legal recognition of same-sex unions as marriage. This was a glaring omission in that the bible of many pundits, the New York Times, even discussed  it last week.

Eight young intellectual defenders of true marriage, interviewed in the New York Times, but nary a mention of them on the four Sunday morning news programs I watched.

I have some perhaps surprising news for our cultural elites (or elitists) like Matthew Dowd, Jake Tapper, George Will, Peggy Noonan, Anna Navarro, and Margaret Hoover. All over America there exist smart, wise, kind, and courageous young men and women like those interviewed by the New York Times. I’m blessed to know some of them.

I received the following email from one* of them in response to my question about how to recapture the hearts and minds of young people:

I wish I had the solution. I don’t know if I do.

My thoughts are that the work must start in the church. What has intrigued me about the progress of gay “marriage” in this country is that states have only now begun approving of it, but entire Protestant denominations have approved of same-sex relationships for years now. Progressive denominations have run out ahead of the culture on this issue. Faithful Christians need to combat the work of progressives in their own denominations.

Pastors must also be willing to preach the whole counsel of God (Acts 20:27). What is crazy to me is how many of the churches I have been to don’t even seem to preach a text. Not any text. It isn’t that they’re just misinterpreting it. They’re simply not preaching it. I think that Christians need to be taught to expect the pastor to preach the Bible, and I think that they should be expecting him not just to read a text and speak on whatever he wants but actually exposit the Scriptures for them.

As a part of the preaching of the whole counsel of God, pastors need to preach not only the things that people don’t mind hearing, but also the things that rub us the wrong way. There are uncomfortable parts of the Scriptures, and we should realize that the parts that make us the most uncomfortable are probably the parts we need to hear the most.

This brings up another point. People simply need to read their Bibles. If we’re spending more time every day watching TV than we are being in Scripture and prayer, our priorities are seriously messed up. Most Christians I know would claim to love Jesus more than their episodes of the Big Bang Theory or Modern Family, but my guess is that most Christians my age will spend more time watching those shows this week than they will praying or studying the Scriptures. This is a serious problem. No wonder so many people who claim to have some sort of Christian faith also don’t have a problem claiming homosexuality is okay. They probably couldn’t even tell you if or where the Bible speaks to the issue, but they could tell you how cute it is that the gay couple they love on their favorite TV show is raising an Asian daughter.

And this reminds me that Christians need to stop watching so much TV. What a waste of a life. In Psalm 90 Moses asks that God will teach us to number our days aright that we may gain a heart of wisdom. In the face of a life that is incredibly brief, Moses asks God for help in living wisely. There is no possible way that a life spent in front of the television is a life lived wisely.

None of these things are innovative or new or anything like that. None of them have to do specifically with the issue of homosexuality, but I think that the problem is far broader and deeper. The problem is we’ve become frighteningly biblically illiterate. It is that we care more for our reputations than we do for truth. It is that we have churches which have set up to entertain the goats rather than feed the sheep. It is that we offer a, nicer, cheesier, blander version of secular culture and then wonder why our churches shrink. It is that we’ve become spineless in all things. It’s no wonder that we can’t stand up to a cultural redefinition of marriage. We haven’t stood up to anything else.

I wonder how differently the culture would view marriage if every time a homosexuality-affirming play, novel, essay, film, speaker, picture book, or lecture were presented to children and teens in our schools or elsewhere, the ideas of these young people were presented at the same time.

What is so remarkable in the jawboning of the press is their claim that Republicans who oppose the jettisoning of sexual complementarity from the legal definition of marriage have “moved too far to the Right.” Since when does not moving become moving?

There are times and reasons for cultural movement. When policies and laws are objectively wrong and logically indefensible, the culture should move as it did in opposition to slavery, Jim Crow laws, and interracial marriage. And there are times and reasons for steadfast immobility as with the protection of the unborn, the preservation of sexually complementarity marriage (i.e., true marriage), and the refusal to subordinate the inherent rights of children to the selfish desires of adults.