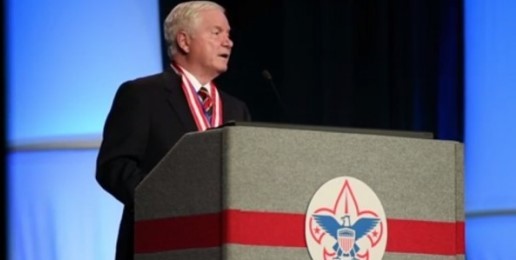 A pro-family lawyer says the new president of the board of the Boy Scouts is wrong in saying the organization won’t revisit the ban on homosexual leaders.

The statement comes from former U.S. Defense Secretary Robert Gates, who says he supports openly homosexual adults in the Scouts but will oppose reopening the subject.

Matt Barber of Liberty Counsel Action, and founder of Barbwire.com, says Gates should have seen the impact of repeal of the ban on open homosexuals in the military.

“With homosexual assaults on men in the armed forces particularly skyrocketing,” says Barber. “Since ‘Don’t Ask, Don’t Tell’ was lifted, upwards of more than a third increase in sexual assaults – male on male.”

Echoing those allegations, The Washington Times reported on male-on-male assaults in a May 20 story, citing a Pentagon survey of service members.

But Gates’ open support of homosexual troop leaders has an influence irrespective of his vow because, according to Barber, it puts political pressure on the scouts to surrender to homosexual activists.

“I have said all along that they will eventually cave,” says Barber, “because the homosexual activist juggernaut simply will not be daunted. And they are demanding nothing less than absolute affirmation and allowing fully, openly out and proud homosexual men to take your boys on overnight camping trips.”

While Gates says he will oppose reopening the issue of homosexual leaders, he represents only one vote on the board.

When the Scouts last year voted to allow homosexuals, alternative scouting organization Trail Life USA was founded as a boys organization based on biblical truth.