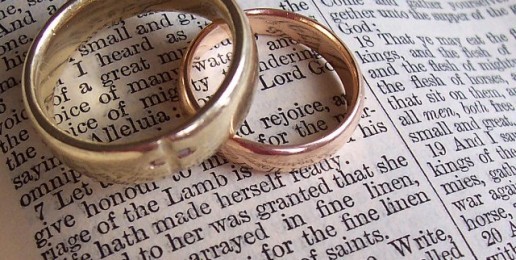 Homosexual Faux-Marriage and the Family
Written By Laurie Higgins   |   02.28.13
PRINT

Eliminating sexual complementarity from the legal definition of marriage necessarily means formally declaring that marriage has no inherent connection to reproductive potential. Those who seek to redefine marriage—marriage revisionists—claim that because many marriages don’t result in children, the issue of reproductive potential is irrelevant.

Marriage revisionists who claim that marriage has no inherent connection to reproductive potential and is constituted solely by deep emotional bonds shift the focus from the needs and rights of children to the desires of adults. In so doing, marriage revisionists erode the only justification for government involvement in marriage.

Further, marriage revisionists have no reason to prohibit plural marriage or incestuous homosexual marriage and no way to explain why marriage should be permanent and exclusive.

If marriage is constituted by deep emotional bonds with no inherent connection to procreation and childrearing, then there’s no reason to desire it to be exclusive or permanent. After all the government  has no more vested interest in recognizing and regulating inherently sterile loving relationships between two homosexuals than it does in recognizing and regulating loving relationships between platonic friends.

The traditional and true understanding of marriage is the only view of marriage that can justify and account for the cultural belief that marriage is necessarily binary, exclusive, and permanent.

The inevitable consequences of such a radical revision of marital laws are profound. Some will be felt immediately; some will not be manifest for some years. But all will be destructive to children and the family.

Here are just a few of the ways the legal recognition of homosexual unions as “marriages” will affect the family:

Abolishing sexual complementarity from the legal definition of marriage is not an “equality” issue. It’s not an issue of “fairness” or “justice.” And it’s certainly not an issue of compassion. Homosexual activists are not pursuing marriage for the benefits or privileges that accompany marriage. They already have those.

They are pursuing the elimination of the central defining feature of marriage in the service of their unholy quest for compulsory cultural approval of homosexuality—approval that they seek too through access to the hearts and minds of our little ones. Legalized “same-sex marriage” wins them that access.

Take ACTION:  If you haven’t yet sent an email or a fax to your state representative — it is time to speak up now!  Click HERE to contact your Illinois Representative and tell him/her to oppose the effort to redefine marriage!.  You can also call him/her through the Capitol switchboard at (217) 782-2000.

Better still, schedule a meeting with your representative, bring as many constituents as you can, and ask him or her the questions available HERE.

You can also help us continue the fight for natural marriage by donating $10, $25, $50 or $100 or more today. With your support we can continue our vital work!  Click HERE to support the work and ministry of Illinois Family Institute.