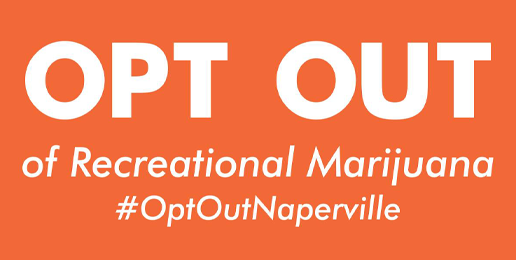 It doesn’t matter what the communities around the City of Naperville do. If you normalize marijuana use, commercialize the product and increase access, you’re going to see an increase in drug traffic and use in all age categories. It is time to take a stand and keep recreational marijuana out of Naperville!

What: Rally in support of opting out of marijuana retail businesses

Where: Central Park – 104 E. Benton Avenue, Naperville (behind the Y).

Take ACTION: Heading out of town this weekend? You can send an email to the entire City Council and the Mayor at once with this address: council@naperville.il.us

It couldn’t be easier! Simply ask your elected officials to limit drug traffic and protect the families and businesses of Naperville by banning retail sales of marijuana.

Although the licensed growth, sale, possession and use of marijuana will be legal in Illinois effective January 1, 2020, the legislation signed into law by Governor JB Pritzker allows villages, cities and counties to opt out of marijuana retail sales. This gives communities the opportunity to limit drug traffic by saying “no” to the retail presence of a federally classified Schedule 1 Drug, which is a dangerous intoxicant that the DEA deems has “a high potential for abuse.”

Don’t let proponents deceive you with their “tax revenues” talking points. According to a report published by the Centennial Institute, Colorado Christian University’s think tank, “for every dollar gained in tax revenue, Coloradans spend approximately $4.50 to mitigate the effects of legalization.” The costs of legal pot is not worth the costs to families, communities and lives.

Far from being an innocuous drug that the marijuana lobby portrays as safe and even medicinal, marijuana has serious health risks that should alarm any parent and community officials.

In the six years since marijuana was legalized in Colorado, the number of drivers involved in fatal crashes who tested positive for marijuana has doubled. There have been increased rates in marijuana-related emergency room visits, hospitalizations, increased use in every age category, and higher rates of violent crime.

Though legal for 21 and older, more than a fourth of Colorado’s middle and high school students use pot more than once daily. Chronic use by those under 25 can lead to a permanent loss of up to 8 IQ points, which to a person with an  average IQ, could mean the difference between a good paying versus a minimum wage job.

Knowing what we know about the tragic and often irreversible effects of marijuana, we cannot in good conscience permit a retailer to peddle a drug that robs so many youth of their future and compromises the safety of our citizenry. Instead of making Big Marijuana wealthier and the City of Naperville a haven for those selling the drug and those seeking to purchase it, let’s make it a refuge for families seeking to shield their loved ones from this drug’s destructive path.

The City of Springfield Considering a Ban on Marijuana Retail Sales?