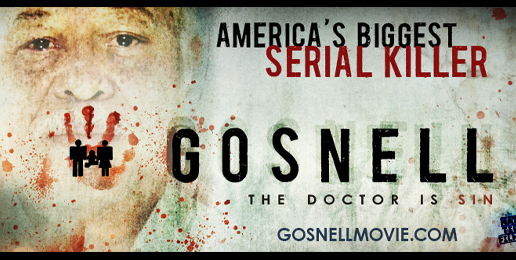 The Most Important Movie You’ve Never Heard Of
10.11.18
PRINT

“Gosnell: The Trial of America’s Biggest Serial Killer” debuts in theaters nationwide on Oct. 12. I do believe this groundbreaking film by indie producers Phelim McAleer and Ann McElhinney is the most important movie in America right now — a true-life saga of good vs. evil, deadly medical malpractice, systemic government malfeasance and cultural apathy toward the most vulnerable members of our society.

I first reported on this real-life horror story nearly eight years ago, but you’ve probably not heard or read a word about “Gosnell” in the mainstream press, TV news or online. The conspiracy of silence is the result of both malign neglect and active suppression of inconvenient truths:

—One CNN commentator flippantly explained that the network’s lack of interest was a “business decision,” not bias.

—Pro-abortion censors at crowdsourcing giant Kickstarter banned McAleer and McElhinney from raising money for the project — leading small donors across the country to help conduct the largest-ever crowdfunded movie on Indiegogo. (Full disclosure: I put my money where my principles are and donated three times, in addition to using my social media platforms to lend a hand.)

—And this past week, Facebook banned advertising for the movie — a continuation of its systemic crackdown on conservative speech.

What are they trying to hide?

Philadelphia abortion practitioner Kermit Gosnell is behind bars, serving three consecutive life sentences for a murderous crime spree that places him in the same infamous pantheon of homicidal maniacs as Charles Manson, Jeffrey Dahmer and Ted Bundy. But because his victims were hundreds of poor minority women and their children, Hollywood, women’s groups and the media — who usually never hesitate to sensationalize criminal masterminds — are AWOL.

Why? Because radical leftists zealously believe that abortion must be defended at all costs, even if it means whitewashing its bloody, half-century legacy of mass genocide in our nation’s inner cities.

Operating under the cover of providing “reproductive health services,” death doc Gosnell brutally executed hundreds of healthy, living, breathing, squirming, viable babies by stabbing them in their necks and severing spinal cords with scissors and knives. This twisted murderer kept newborn baby feet in specimen jars, which he crammed into the grisly refrigerators of his filthy “clinic” for “research.”

In 2013, Gosnell was convicted of murdering three babies born alive in his death factory and found guilty of involuntary manslaughter in the death of 41-year-old Bhutanese refugee Karnamaya Mongar, who died of a inhumanely administered drug overdose at Gosnell’s “Women’s Medical Society.”

For 15 years, public officials at the Pennsylvania Department of Health, Department of State, and the Philadelphia Department of Public Health officials did nothing to stop Gosnell. Nearby hospital administrators and “women’s health” advocates at the National Abortion Federation knew he was a butcher, but also sat on their hands.

In their 2017 Regnery book on Gosnell, which they adapted into the new movie, McAleer and McElhinney exposed the monster and his enablers with painstaking dedication to original documentation and investigative journalism. The PG-13 film stays true to the trial record without having to resort to gratuitous graphic imagery.

Actors Dean Cain, Sarah Jane Morris, Nick Searcy, Earl Billings, Alfonzo Rachel, and the entire cast bring the courtroom drama — and more importantly, the human drama — to life. Parents with teenage children can and should bring them. We cannot afford to shield them from the truth and leave them vulnerable to the pervasive propaganda of the culture of death.

Whatever your position on abortion, this brave, independent film is an eye-opener that will change hearts and minds. Perhaps what the speech-suppressers who don’t want you to know about “Gosnell” fear most is this chilling conclusion: Deadly indifference to protecting life isn’t tangential to the abortion industry’s barbaric practices — but at its very core.

This article originally posted at Creators.com.