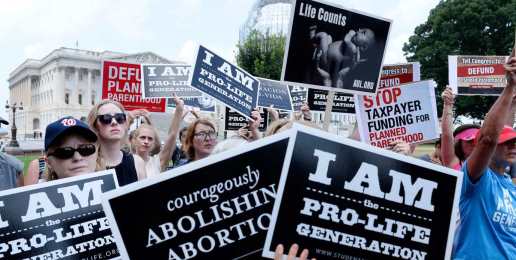 On Thursday, the U.S. House of Representatives passed the American Health Care Act (AHCA) of 2017. This bill, which will now head to the U.S. Senate, would redirect over 80 percent of funds away from Planned Parenthood for a year. Those funds (more than $390,000,000) would instead be used for comprehensive community health centers which outnumber Planned Parenthood facilities 20 to 1.

“Today is a day that should and will be remembered. The House GOP today fulfilled its nearly decade old promise to pass a bill that replaces Obamacare with a law that is pro-life and reduces premium costs for the American people.

“We are proud of the House Freedom Caucus for working diligently in coalition with conservative groups and others to make this day possible. After entrusting the GOP with authority to lead the country based upon their campaign promises, the House GOP has made good on turning promises into policy. Now it is time for the Senate to follow in the House’s footsteps and pass the AHCA, so that this vital legislation can be signed into law by President Trump who understands the value of every person, born and unborn.

“As a nation, we are without excuse in paying for abortion on demand in Obamacare and subsidizing Planned Parenthood’s gruesome trafficking of baby body parts and its inhumane treatment of mothers and their unborn children.

“I look forward to even more pro-life gains under the Trump administration, as we continue to move toward once again being a nation where all human life is welcomed into the world and protected under our laws,” Perkins concluded.

Regarding the House’s passage of the American Health Care Act, which includes a provision that would eliminate federal funding for Planned Parenthood if the bill is eventually signed into law, Alliance Defending Freedom Senior Counsel Kevin Theriot said:

“[T]his billion-dollar abortion giant has been implicated in massive fraud, waste, and abuse of Medicaid and other federal and state programs. Congress’s well-founded concern that Planned Parenthood and its affiliates are engaged in a pattern of deceptive practices designed to maximize their bottom-line revenue should be enough reason to end the public largesse on their behalf, even apart from the fact that they destroy a third of a million human lives every year and have been involved in numerous other scandals.”

Opt Your Child Out of Radical Sex Ed Classes