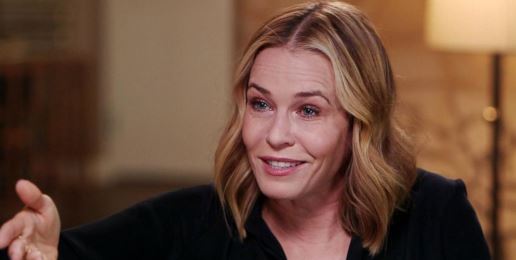 The foulmouthed comedian and talk show host Chelsea Handler has written an essay—appropriately for Playboy Magazine—rationalizing the intentional killing of her two preborn babies when she was 16 years old. She was not pregnant with twins. She became pregnant twice when she was 16.

Handler characterizes her parents’ offer to help her dispose of her offspring as good parenting: “They acted like parents for one of the very first times in my life and took me to Planned Parenthood.  I felt parented, ironically, while I was getting an abortion.”

Perhaps Handler’s pitiable revelations about her childhood in Vanity Fair help explain not only her hard edges but her antipathy toward marriage and children:

On her childhood, and absent parents:

“I grew up in New Jersey, and I was the youngest of six kids, and I had a father who was a used-car dealer and a mother who was a Mormon, and they slept a lot, kind of like cats. And they just never planned on having me, and I had five older brothers and sisters that were in college, and they said, ‘Oh, you know, I guess you can raise yourself.’ And they were serious.

“And I started to go through life, and you know, like, I heard kids around the neighborhood talking about nursery school. I said, ‘What’s that? Nursery school sounds cool.’ And I remember charging into my parents’ bedroom, I’m like, ‘What’s everybody’s talking about nursery school? Am I going? Am I going?’ They were, like, ‘No, no.’ Meanwhile, I was still in diapers, because they hadn’t bothered to potty train me. I was five. I’m like, ‘And why am I wearing a diaper?’

“So they said, ‘No, no. Nursery school is not important. We’ll get you started when you have to go to kindergarten.’ And I go, ‘No, I don’t think so. I want to go to nursery school. It sounds very important to me. I could get a big break in nursery school; I don’t know what could happen.’ And my parents were, like, ‘No, just wait for kindergarten,’ because that was in walking distance to my house, so they were, like, ‘At least you can get yourself there, we don’t have to be responsible for you.’ And they were so not participating in my childhood.”

On realizing she had to raise herself, and the worst school lunch possible:

“And I did go to nursery school, I went and found a popup nursery school in my neighborhood, and I registered. I didn’t listen to my parents, because I knew I had to create a life for myself. And it became more and more obvious to me as I grew up a little bit more. You know, they would forget to pack me lunch for school. They never packed me lunch, and I would go to school and everybody had a lunch, and I would want to sit with the cool girls, with the cool lunchboxes, and, I had to get a lunchbox used. And I came home one day, and I said, ‘Mom, you never pack me lunches, like the other girls. Dad, you never drive me to school.’ And my mom said, ‘O.K., I’ll pack you lunch.’ And I went to school that day, and I sat at the cool girls’ table, and I took out my lunch, and I was so excited my parents made it for me, and it was two hardboiled eggs wrapped in tinfoil. It was like the most uncool lunch you could ever imagine in your life. And I looked at these hardboiled eggs, and I tried to maintain my coolness, I said, ‘Oh, this is fine.’ And I went to crack them, and they were raw eggs, and they splattered everywhere.

“And I went home to my parents, and I said, ‘What the f**k is going on here? I am a child, and you guys need to raise me, O.K.? Where was I supposed to cook those eggs? On a skillet that I don’t have? On the blacktop at school?’ And that’s when I just started to think, Oh god, my life is all about being responsible for me. No one is going to take care of me. I want to be beholden to no one….if these are the people that are in charge of me, then I want to be in charge of me.”

On realizing that she didn’t want to be somebody’s wife:

“I remember looking through my parents’ financial records, and confronting them and saying, ‘Why isn’t Mom’s name on the deed to this house?”…And he said, ‘Oh, shut up. You ask too many questions. You’re always asking questions. You’re not elegant at all.’

“And I looked at my father, ‘Well, maybe I’m not here to be elegant, O.K.?’ And he goes, ‘Well, you’re not going to make anybody a very good wife.’ And I said, ‘Well, I’m not planning on being anyone’s wife.’ And I wasn’t. And my mom and I talked a lot about children, and she just had this kind, anachronistic idea of what it was like to raise a family. And I just thought, Oh my God, I don’t ever want to have kids—well, I don’t ever want to have a kid—but I don’t ever want to send my daughter to school with two raw eggs. I didn’t want to do that, and I didn’t want to ever not have my name on the deed of the house. How silly it sounds, it was an important kind of notion for me; it was one of those moments.”

Though Handler’s far less than ideal upbringing explains her feelings and beliefs about childlessness, abortion, and marriage, it doesn’t justify her moral conclusions or her odd moral imperatives.

Getting unintentionally pregnant more than once is irresponsible, but it’s still necessary to make a thoughtful decision. We all make mistakes all the time. I happened to f**k up twice at the age of 16. I’m grateful that I came to my senses and was able to get an abortion legally without risking my health or bankrupting myself or my family. I’m 41 now. I don’t ever look back and think, God, I wish I’d had that baby.”

It seems that to Handler it is morally imperative to be “thoughtful” about whether to abort her babies but not “necessary to make thoughtful decisions” about having sex or having unprotected sex. It seems that a “thoughtful” decision for Handler encompasses primarily her feelings and little about the moral status of the incipient lives growing within her. Why is it more thoughtful to intentionally end the life of her child than to give birth to him or her and allow others to provide what Handler could not?

Handler prognosticates on the fate of Roe v. Wade:

I don’t buy that Roe v. Wade is in danger. We’re too far ahead of the game. Once you go forward in history, you don’t go backward….You can’t introduce a black person and be like, “Oh, I just got a slave!” That era is over. It’s similar to what’s happening in Mississippi and some other states with gay-marriage discrimination—marriage equality is going to take. You can’t stop that. We’ve already made the decision, and now we’re moving on to transgender rights. And it’s a wrap on men deciding what women can do with their bodies.

What would “progressives” do without slavery to exploit? How would they frame their moral arguments without race to compare to everything? How would archdefenders of the indefensible continue their  assaults on unborn babies and sexual sanity had there been no Jim Crow laws? How would social Darwinists who falsely believe that history moves inevitably toward truth and justice—as, of course, defined by them—argue their positions if they couldn’t hitch their abattoirs, bathhouses, and co-ed showers to the backs of the enslaved? Godwin’s law should be revised to accommodate “progressive” argumentation: “If a discussion on sexual matters goes on long enough, sooner or later a “progressive” will compare someone or something to a racist or racism.”

We have 7.3 billion people on this planet. Anybody who carefully decides not to become a parent—let alone a bad parent, which is what I would have become—should be applauded for making a smart and sustainable decision.

I’d love for somebody to try to tell me what to do with my body. I dare them.

Someone should tell Handler that no one—literally no one—is saying she or any other woman who does not want to be a parent should become one. Many are saying, however, that her lack of desire to be a parent does not give her the moral right to deny life to another. Those who value all human lives are not trying to tell her what to do with her body. They’re trying to tell her what she ought not do with the body of another. And in case she hasn’t noticed, it’s not just men defending the lives of the unborn. There is an army of women—including young women—bending the arc of moral universe toward justice for the unborn.