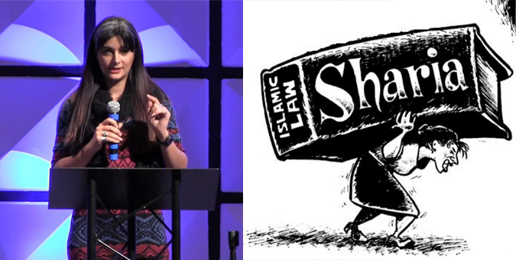 Iranian born Anni Cyrus came to the United States for freedom, she says. Back in Iran, she had been declared an adult at age 9, and a few years later was sold for fifty American dollars by her father to a man to be his wife. That, she said, is permitted by Sharia Law, since the prophet Mohammad married girls as young as 6 and consummated the marriages when they were 9. Every day, an average of 5-7 little girls are sold in Iran.

Cyrus was abused and imprisoned as a teen, and then escaped to America. She now advocates for women and girls suffering under Sharia. Her mission is to bring hope and healing to women and girls who have been unfortunate enough to be exposed to the plague of Islamic ideology. She experienced, first hand, the horrors of living under Islamic theocracy in Iran.

For example, wife beating is permitted if the husband merely suspects her of disobedience. Everyone, Cyrus said, needs to read the Koran. Get educated, she said, and speak out.

Anni recently spoke for at a forum on radical Islam in the Chicago suburbs. Her presentation was video-recorded. Her story is now posted on the IFI YouTube channel. This 19-minute presentation will leave you much better informed and with a deeper understanding of why Christians should actively oppose the promotion of Sharia in our nation. You can watch it here below, or click HERE.

Sharia for Women: A Female Sharia Survivor Shares Her Story

Special Panel on Radical Islam – 3 Locations
b
a
x
r