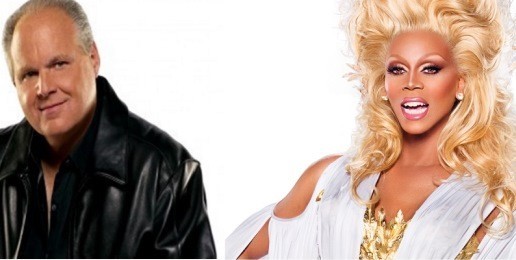 It is the “T” word in the LGBTQ acronym, “transgender,” now hailed by Time Magazine as the new civil rights frontier.

And for Rush and Ru, it is the “tranny” word in particular that brings them together.

Before broaching this topic, however, it’s important to remember that many people do suffer terribly because of gender identity issues, sometimes to the point of suicide, and as I’ve said many times before, whatever we can do to help these people find true wholeness, we should do it.

That being said, I do not believe that ultimate, true wholeness is found in crossdressing or in putting prepubescent kids on hormone blockers or in resorting to sex-change surgery plus hormones for life.

And because I hold to these views, I am officially transphobic. (If you’re not familiar with terms like transphobe, transphobic, and transphobia, then you’d better get used to them in a hurry.)

Such is the climate of the day.

Time’s May 29, 2014 cover story was entitled “The Transgender Tipping Point,” and the article began by explaining that, “Nearly a year after the Supreme Court legalized same-sex marriage, another social movement is poised to challenge deeply held cultural beliefs.”

It was this article that Rush was referring to on his May 29th show, stating that it was the folks at Time “who discuss the Scalia Supreme Court ruling and what he meant, and they say he was right. Now doors are wide open.”

This would not be the first time that Scalia’s warnings have proven true.

Already in 2003, in his dissenting opinion to Lawrence v. Texas, where 6 Supreme Court justices found a constitutional “right” to sodomy, Justice Scalia stated that, “State laws against bigamy, same-sex marriage, adult incest . . . are … called into question by today’s decision.”

Things have gotten to the point that today, in some states, transgender rights overrule everyone else’s rights. They even overrule common sense.

Getting back to Rush, he was referencing Time’s story when a caller who identified himself as Tina (he would obviously want to be referred to as “she”) took exception to his comments, not realizing that he was citing Time’s sentiments rather than his own.

As the conversation ensued and Tina explained that it was offensive to use the word “tranny,” Rush sarcastically played along, a fact which escaped Huffington Post columnist Catherine Taibi, who wrote that, “Rush Limbaugh got a long overdue lesson on Thursday when a transgender caller, Tina, smacked down his use of the word ‘tranny.’

“While attempting to defend himself against the caller’s claim that he is anti-transgender rights, Limbaugh assured her that he has ‘been for trannies for a long time.’”

Did Taibi not understand what Rush was doing? He even stated after the break, “I made a note to ask [Tina] a question ’cause she was still talking and I covered the note up with a piece of paper. It’s a salient question. ‘How do you react when you hear people talk about trans fats?’ But I never got a chance to ask. So hopefully I will have an opportunity to ask that and clarify whether or not that’s offensive. ‘Cause we don’t want to use it if it is.”

Did Taibi really miss this?

What makes this more interesting still is that Tina, the caller, told Rush that Ru Paul had taken a position on the term tranny. As noted in Daniel D’Addario’s May 27th article on Salon.com, “Over the weekend, RuPaul accused those offended by his use of [the term Shemale] as well as ‘tranny’ of operating in bad faith and policing his behavior in an attempt to become the oppressor . . . .”

Paul even tweeted out the message, “Forget an outside threat, the ‘Gay Movement’ will eat itself from the inside out,” with reference to Orwell’s Animal Farm.

So, transgender is the new civil rights frontier, Time Magazine acknowledges the accuracy of Justice Scalia’s warnings, Rush Limbaugh plays along with a transgender-identified caller and makes a sarcastic note to himself to inquire about the term “trans fats” being offensive, the Huffington Post thinks Rush is being serious, and Ru Paul predicts that the “Gay Movement” will destroy itself.

Who can predict what’s coming next? Perhaps it will be that not only Scalia’s warnings but those also of Ru Paul will prove true?

The Nightmare of Roe Ends, But Undoing the Damage Continues
b
a
x
r