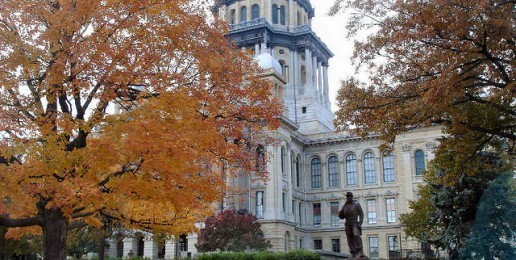 Late last week, the Chicago Tribune and other media outlets reported that in a sit-down with the editorial board of the Daily Herald, Gov. Pat Quinn (D) was asked if civil unions could be a reality in the state by Christmas.

Quinn’s answer as reported by the Herald:

“The votes are there, I believe,” Quinn said. “In the Senate for sure, and definitely I think we can do it in the House.”

He called himself a “strong advocate of civil unions…”

“I think we can pass it this year. I would like to see it voted on earlier,” Quinn said.

Take ACTION: Contact your state representative to preserve natural marriage in Illinois!  Call the Capitol switchboard at 217-782-2000 and ask your representative to please vote ‘NO’ on SB 1716 and, instead, pass a constitutional amendment to preserve marriage and its unique benefits for one man and one woman. (Be assured, legislators take very seriously the calls, letters and emails they receive.)

The only difference between marriage and “civil unions” is in name. The rights and privileges would be the same.

We must point out that victories by pro-family candidates on November 2, 2010 do not take effect until January 2011, which means that defeated and retired lawmakers (aka lame ducks) will return to the legislature in mid-November and again in early January to wrap up unfinished business. This is when things can get very interesting. Lame duck lawmakers have nothing to lose politically, and may surprise constituents in how they cast their votes.

Current state lawmakers are scheduled to return to Springfield November 16-18 and November 29 – December 1.

SB 1716 would create homosexual “civil unions” in our state. This anti-family legislation passed the House Youth and Family Committee on March 5, 2009 and is now on 3rd Reading — the last step before a vote.

IT IS VITAL THAT WE MAKE OUR WILL KNOWN TO STATE LEGISLATORS. If our legislators give all the rights and benefits of marriage to homosexual partners (through civil unions), the next step will be to allow gay “marriage.”

Civil unions, same-sex “marriages,” and domestic partnerships will destroy marriage as we know it. When governments offer sex-partner benefits, they are essentially endorsing the behavior. These government-sanctioned sex-partner benefits will take us one short step away from legalizing “marriage” between two people of the same sex. Marriage by any other name is still marriage.

Those who want to redefine marriage often insist that the only necessary qualification for marriage is “love.” Under that rationale, there can logically be no boundaries as to what constitutes marriage. Any combination or number of consenting individuals must ultimately gain the same legal and societal sanction as traditional marriage. While love is vital, it is not the definitive element of marriage, and love is certainly not the concern of government. We love many people we do not marry.

Natural marriage and family must not be undermined. The data are clear and irrefutable — children do best in stable, healthy homes with both a mom and dad. Illinois’ children deserve the ideal environment and must have healthy examples. Today, with millions of fatherless children, it is callous and irresponsible to make matters worse by redefining the most basic institution of marriage to suit the desires of a few selfish adults.

We have an opportunity to stop this bill that would establish counterfeit marriage. We must preserve one-man, one-woman marriage as the highest social good for society and for our children by urging our legislature to vote against SB 1716 and to support the passage of HJRCA 2 — an amendment preserving marriage and banning all counterfeits — introduced by State Representative David Reis (R-Olney).

Please call your state representative now. We cannot afford to let this bill get to Governor Patrick Quinn’s desk, as he is on record in support of it.

Bottom line: People should not be granted special legal protection and benefits based on their sexual preferences and voluntary behaviors. Moreover, homosexual “marriage” is not a civil right.