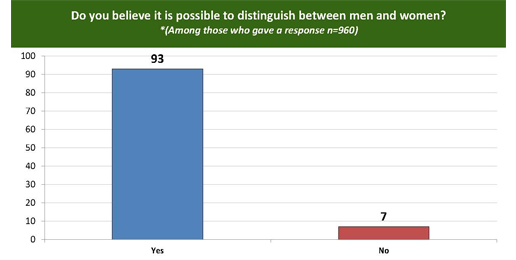 A new national poll from McLaughlin & Associates of likely November voters finds that 78 percent of Americans do not believe transgenderism is a “healthy human condition.” That same large percentage of Americans agreed that minor children suffering from gender confusion should be “required to wait until they are adults” before undergoing life-altering drugs and surgeries. Moreover, 90 percent believe that medical professionals performing gender-altering procedures should be required by law to disclose the long-term medical and psychological impact of such procedures.

An overwhelming 93 percent of those surveyed say it is “possible to distinguish between men and women.” Most of those surveyed (72 percent) also do not want schools teaching elementary-age children about sexual orientation and gender identity with 38 percent saying it was “inappropriate” and another 30 percent saying is “dangerous because it can lead to children being groomed for sexual encounters at an early age.”

However, the pollsters also found that a large portion of those surveyed are afraid to speak about this issue due to fear of retribution.  One-third say they keep their views on this to themselves. Only 30 percent say they are willing to express their views on this in public.

This article was originally published by the AFA of Indiana.