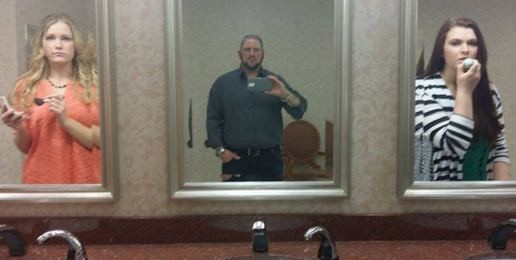 Lake Forest, Illinois resident Dianne Casuto in a letter in the Chicago Tribune on Sunday criticized a previous commentary in which Elizabeth Edens expressed concern over the safety to women posed by female-impersonators being allowed in women’s restrooms. Cassuto wrote, “It is inconceivable to me why Edens would feel ‘unsafe’ in a restroom simply because a transsexual or transgender individual is present there as well.”

Let’s clean up the euphemistic language, eliminating the Newspeak and rewriting her sentence more clearly: “It is inconceivable to me why Edens would feel ‘unsafe’ in a restroom simply because a man is present there as well.”

If Casuto is unable to conceive of why women might be concerned for their safety when forced to share restrooms with men, she suffers from a serious imagination deficit.

Leftists, recognizing the importance of language in cultural battles, insist that everyone use their dogma-drenched diction. Those “transgender individuals” about whom Casuto writes who are seeking to use women’s restrooms and locker rooms are actually men.

George Orwell warned about the abuse of language by cultural dictators, a warning that should teach us to resist social pressure to surrender to their imperious commands—while we can:

The purpose of Newspeak was not only to provide a medium of expression for the world-view and mental habits proper to the devotees of IngSoc, but to make all other modes of thought impossible….Its vocabulary was so constructed as to give exact and often very subtle expression to every meaning that a Party member could properly wish to express, while excluding all other meaning and also the possibility of arriving at them by indirect methods. This was done partly by the invention of new words, but chiefly by eliminating undesirable words and stripping such words as remained of unorthodox meanings, and so far as possible of all secondary meaning whatever….

Your support of our work and ministry is always much needed and greatly appreciated. Your promotion of our emails on Facebook, Twitter, your own email network, and financial support is a huge part of our success in being a strong voice for the pro-family cause here in the Land of Lincoln.