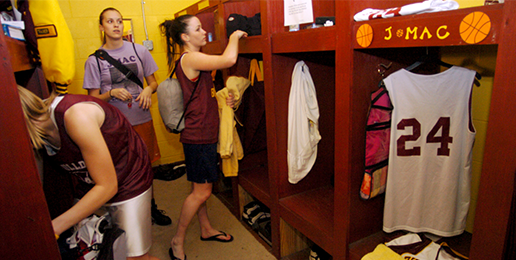 The ideological and moral idiocy of “woke” Americans has not yet reached its nadir, but it’s getting close.

A complaint was filed with the Illinois Human Rights Commission by a female minor who pretends to be a boy and her parents, Tracy and Michael Yates. She alleged that she was discriminated against based on her “gender identity” when Lake Park High School District 108 in Roselle, Illinois required her to change clothes behind a privacy curtain in the boys’ locker room. She wanted to be free to undress out in the open with her objectively male peers. To heck with their feelings or rights. In mid-July, the Illinois Humans Rights kangaroo court (KC) ruled that the district did discriminate against her, arguing that minors who identify as “trans” must be given unrestricted access to the locker rooms of opposite-sex peers. (I had to file a Freedom of Information Act request to get the ruling. It is not listed with other rulings on the Illinois Human Rights Commission website.)

The commissioners—all of whom are political appointees—voted 3-0 in favor of the student. It’s interesting to note that only one of the commissioners, Robert A. Cantone, is an attorney. The other two are Michael Bigger, an insurance agent, and Cheryl Mainor, a business owner. Cantone and Mainor are Democrats, and Bigger is a liberal Republican. These are paid positions. Cantone and Mainor, Pritzker appointees, are being paid $119,000 per year. Bigger, a Rauner appointee, is being paid $46, 960 (Bigger must be bitter). In the last full calendar year, Jan. 2018-Dec. 2018, the commission met 20 times, averaging out to less than two times per month. Nice gig if you can get it.

To be clear, the KC’s foul ruling means that, for example, boys who pretend to be girls must be allowed to use girls’ locker rooms in exactly the same ways girls are allowed to use them, which means schools may not require them to change their clothes behind privacy curtains or in privacy cubicles and may not prohibit them from taking nude showers. Same goes for girls who pretend to be boys. Schools must pretend that boys who want to be girls are girls and girls who want to be boys are boys.

This also means something even more profound and disturbing. Civilized societies—as opposed to primitive and pagan cultures—recognize, respect, and accommodate the natural feelings of modesty and desire for privacy that humans experience when engaged in private acts. Civilized societies have long understood intuitively that such feelings derive from objective physical embodiment as male or female. Objective biological differentiation—that is, the sexual binary—is the reason civilized societies created separate spaces for objectively male and female humans to engage in private acts in which bodies are exposed or intimate bodily functions are performed.

The KC’s decision, however, is based on the revolutionary and arguable “trans”-cultic assumption that biological sex has no relevance to undressing, showering, or engaging in bodily functions. In the view of the KC and “trans” cult, the sole relevant factor for determining private space usage is subjective feelings. They believe that if a teenage boy wishes he were a girl, he should be treated as if he were a girl. Private spaces become symbolic tools for affirming a delusion.

The natural and good desire people naturally develop to be separate from people of the opposite sex when naked, partially dressed, showering, or performing excretory functions can be either reinforced by culture or undermined. “Trans” cultists seek to undermine it in the service of their disordered desires, science-denying beliefs, and corrupt moral code. And they seek to impose their ideology by deracinating the rights of decent people.

Facilities Distinctly Private. Any facility, as to discrimination based on sex, which is distinctly private in nature such as restrooms, shower rooms, bath houses, health clubs and other similar facilities for which the Department, in its rules and regulations, may grant exemptions based on bona fide considerations of public policy.

The questions are moot, though, because the school district decided to allow opposite-sex impersonators full and unrestricted access to the locker rooms of their opposite-sex peers even before the KC ruled. So, much for the integrity and backbone of that district’s school board and administration.

As the incoherent, doctrinaire “trans” ideology advances, it continues to twist into even more grotesque shapes. Society is no longer expected to affirm just the damnable lies that men can be trapped in women’s bodies, that women can have penises, and that men can give birth. Now we’re expected to affirm the damnable lie that because some people are uncomfortable with the superficial conventions (e.g., hairstyles, clothing styles, activities) associated with their biological sex or because they’re drawn to the superficial conventions associated with both sexes, the human species is not binary. Allowing a few intellectually, psychologically, and morally deluded cross-dressers into opposite-sex private spaces is morphing into allowing anyone to use any private spaces they wish at any time. Public acknowledgment of the sexual binary is being forcibly erased.

A “pronoun guide” published by American University’s Center for Diversity & Inclusion exposes the efforts of “trans”-cultists to erase the binary—well, to erase the freedom of Americans to acknowledge the reality of the “gender binary”:

Can’t leave any words behind in the wake of the “trans” revolution that suggest the human species is sexually binary. No, siree, that won’t do at all.

“Trans”-cultists aren’t just inventing new pronouns to reflect their sex-erased world. In true Orwellian fashion, they’re also redefining existing words to erase all prior traces of a world that embraced reality. George Orwell warned us what this kind of language control is intended to do in his description of Newspeak:

The purpose of Newspeak was not only to provide a medium of expression for the world-view and mental habits proper to the devotees of IngSoc, but to make all other modes of thought impossible. It was intended that when Newspeak had been adopted once and for all… a heretical thought… should be literally unthinkable, at least so far as thought is dependent on words….  This was done partly by the invention of new words, but chiefly by eliminating undesirable words and stripping such words as remained of unorthodox meanings and so far as possible of all secondary meaning whatever….

[T]he special function of certain Newspeak words… was not so much to express meanings as to destroy them…. [W]ords which had once borne a heretical meaning were sometimes retained for the sake of convenience, but only with the undesirable meanings purged out of them.

And who among us will resist sexually integrated private spaces and Newspeak mandates when the government tells us resistance is futile?