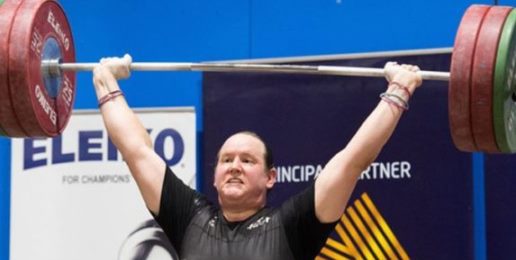 The performance was stunning, as New Zealand weightlifter Laurel Hubbard absolutely smoked the competition, beating her nearest competitor, a Samoan woman, by nearly 20 kilograms. The only problem is that Laurel is a biological male, born Gavin, which is why a number of the competitors felt the competition was unfair.

But of course it’s unfair. Hubbard is a male, not a female, and even after months of hormone treatments, he still has unfair advantages over the other women, who sacrificed for years to make it to this elite level, only to lose to a man. How is that right?

As one woman tweeted in response to this news, “Imagine training for this your whole life, as a woman, only to have a known leader in men’s weightlifting take your title.” 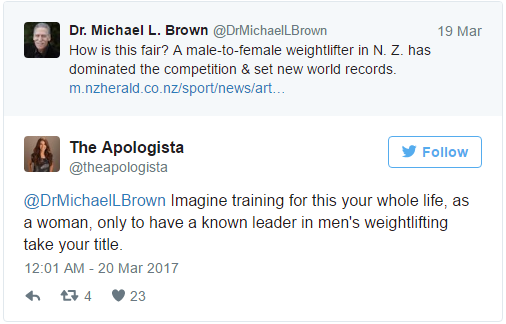 Gavin Hubbard had “previously competed at a national level in men’s weightlifting,” making it all the more absurd that he would now be competing against women, which is why his presence was “met with criticism from Australian competitors who believe a transgender athlete in the female weightlifting category was not an equal playing field.”

After the wrestling competition, Patti Overstreet, the mother of another wrestler, said, “She’s standing there holding her head high like she’s the winner. She’s not winning. She’s cheating. It’s not equal. It’s never going to be equal.”

In response to this, cultural commentator Bill Muehlenberg wrote, “Nope, it sure ain’t equality, and it sure never will be. Trying to treat unequal things equally will always result in blatant, appalling inequality. And in the case of sports, it will result in more women being taken to hospital — if not the morgue.”

When it comes to the weightlifting competition, one of the other lifters said, “We all deserve to be on an even playing field. It’s difficult when you believe that you’re not. If it’s not even, why are we doing the sport?”

Ridiculously, Phil Gifford, described as a prominent sports writer, said “Hubbard had every right to compete with the women after passing ‘straightforward’ hormone regulations.”

Specifically, he argued, “It’s testosterone levels which is a much more scientific way of measuring male gender, female gender than anything else that is currently known. And Lauren has passed all of those tests over the last 12 months.”

So, then, a man who had lowered testosterone levels but all the other physical advantages a male would have over other women should be allowed to compete with the ladies? Just a glance at the pictures in the news report, in which Hubbard dwarfs his competitors, would tell you that something is not fair here. 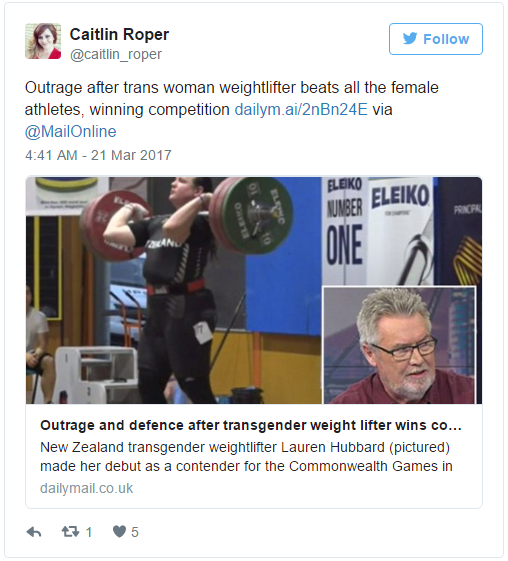 When the World Revolves Around Revolving Genders

Not surprisingly, David Mills recently shared this report from a distressed mother who encountered a man in the ladies’ room at Disneyland: “He wasn’t even peeing, washing his hands or doing anything else that you’d do in a restroom. He was just standing off to the side looking smug … untouchable … doing absolutely nothing.”

As described by Kristin Quintrail, this man “did a lap around the restroom walking by all the stalls. You know, the stalls that have 1 inch gaps by all the doors hinges so you can most definitely see everyone with their pants around their ankles and vagina clear as day.”

As Mills explains, “The man, apparently a fairly large man, wasn’t a man ‘transitioning’ to try to be a woman. The ‘very progressive’ Quintrail would have been fine with that. He was a predator. His way of being a predator was to transgress a boundary — the women’s room door — so that he could intimidate women and their children.”

So, this was apparently a heterosexual predator, not a transgender male-to-female, yet none of the women had the courage to ask him to leave, fearing if they did “he might respond by claiming to identify as a woman.”

As some of us have warned for some time now, and as an increasing number of cases confirms as a real danger, when the law says that you can use the bathroom of your perceived gender, that opens the door to abuses such as this. After all, if the only criterion is who I perceive myself to be, who can argue with it?

Quintrail rightly exclaimed at the end of her blog article, “Gender just can’t be a feeling. There has to be science to it. DNA, genitals, amount of Sephora make up on your face, pick your poison. … I’m sorry it can’t just be a feeling when there’s but a mere suggestion of a door with a peep hole separating your eyes from my vagina or my children’s genitals.”

And the science needs to be better than the “science” being used in Olympic sports worldwide, which allowed for the totally unfair results in the recent, aforementioned weightlifting competition.

Speaking of unfair, Neil Munro reported last week that, “Two women were kicked out of a homeless shelter to make room for a man because he said he is a transgender woman, according to a Canadian news report.

“The women objected when they were told they would have to share a bedroom and live in the shelter with the man, and so ‘both were asked to leave the shelter for good,’ said the TV reporter.”

One of the women, named Tracey, said, “I was uncomfortable with my roommate being transgender. He wants to become a woman, I mean that is his choice but when a man comes into a women’s shelter who still has a penis and genitals, he has more rights than we do.”

And that says it all: This man who identifies as a woman has more rights than the other women, and they have to leave to make room for him.

Can you join me in saying “Enough!”

Let’s continue to look for ways to help those struggling with gender identity confusion while protecting the rights of the rest of society. If enough of us raise our voices, positive change will come.

This article was originally posted at The Stream.

Paraphilias of the Day: Pedophilia, Hebephilia, Ephebophilia, and Pederasty
b
a
x
r