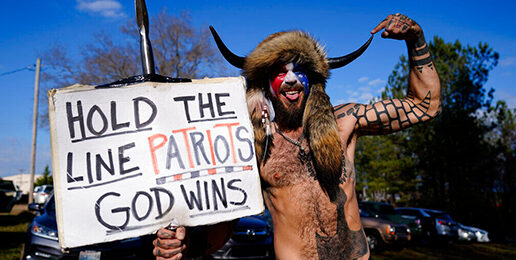 Were the Capitol Rioters Christ-Followers?
Written By Laurie Higgins   |   01.29.21
PRINT

[W]hen [Russell Moore] saw a “Jesus Saves” sign displayed near a gallows built by rioters, “I was enraged to a degree that I haven’t been enraged in memory. This is not only dangerous and unpatriotic but also blasphemous, presenting a picture of the gospel of Jesus Christ that isn’t the gospel and is instead its exact reverse.”

Moore is right, a sign saying “Jesus Saves” displayed near a gallows built by lawless rioters is dangerous and blasphemous. But why does this sign enrage him more than when former constitutional law professor and then-president of the United States Barack Obama cited Scripture as his justification for endorsing the legal recognition of homoerotic unions as marriages? Why does it enrage him more than when self-identifying Christians currently serving in Congress defend the legalized extermination of humans in the womb? Why does the lawless rioters’ signage enrage Moore more than what our elected leaders say and do?

Just calling oneself a Christian no more makes a person a Christian than does a man calling himself a woman make him one.  Scripture teaches that “A healthy tree cannot bear bad fruit, nor can a diseased tree bear good fruit.  Every tree that does not bear good fruit is cut down and thrown into the fire. Thus you will recognize them by their fruits.”

Moore and others claim that the image of Christianity is now marred in the view of leftists, many of whom already hate Christianity and seek its eradication from public life. But is that true? Or are leftists cynically exploiting the indefensible acts of those who falsely claim to be Christ-followers? Are leftists using the signage and rhetoric of anarchists who bear no resemblance to true Christ-followers to further cow cowardly Christians and to turn them against courageous Christians like Senators Ted Cruz, Josh Hawley, and Tom Cotton?

Who is doing more damage to the church (small “c”): the Capitol rioters or the heretical wolves in sheep’s clothing who have infiltrated every denomination and are corrupting doctrine and leading flocks astray, including the Southern Baptist Convention? Some will argue that both groups damage the cause of Christ, which is true, but which should enrage Christians more?

Jesus forewarned Christians about their fate, but American Christians blinded by the freedom we have long enjoyed, can’t see the hatred Christ foretold even as they are cursed and cancelled:

Schor bizarrely writes this in an article ostensibly about Christianity on display at the Capitol riots:

In the video shot by a New Yorker reporter during the siege, the fur-hatted Jacob Chansley—known as the “QAnon shaman” for his alignment with the conspiracy theory as well as his self-described spiritual leanings–delivered a prayer thanking God “for allowing the United States of America to be reborn.” While Chansley spoke, other rioters fell silent in apparent participation.

Jacob Chansley, aka Jake Angeli, was the tattooed, furry-chested, jammy-wearing, buffalo-horn accoutered anarchist who strutted into the Senate chambers with a cocky grin on his face. Why he is included in an article purportedly about Christianity is baffling. If crazy QAnon ideas have infiltrated churches as heretical views of sexuality have, they must be purged. In my experience, however, heretical views of sexuality are far more prevalent in churches than are QAnon ideas and far more dangerous.

Chansley is a “shaman” who follows his own syncretistic religion that includes elements of Eastern mysticism, chakras, auric/planetary frequencies, hallucinogenic drug use, and a weird movement called Ministry of Tomorrow (MOT).

Chansley was first introduced at age 11 to hallucinogenic drugs by his father, which raises an issue few are addressing: the importance of fathers. How many anarchists on the left and right grew up with good fathers in the home?

So, while Chansley may be a Trump-supporter, he is definitely not a typical hardworking conservative Trump supporter or a theologically orthodox Bible-believing Christian. He is, however, definitely a lunatic. The fact that some lunatics support Trump has as little to do with Trump as the fact that there surely are lunatics who support Biden. After all, lunatics and anarchists have to support somebody. Here’s more from Chansley/Angeli, but I don’t recommend wasting your time.

The fact that Chansley “delivered a prayer thanking God” during which “other rioters fell silent” does not mean Chansley is a Christian. Surely Schor knows that Muslims pray, Hindus pray, shamans pray, and Christian heretics pray, and they all think they’re praying to God.

Theologian John Piper offers a helpful explanation of the relationship between the diverse loves of Christians. The first love for Christ-followers must always be for Christ and his kingdom:

[N]ever feel more attached to your fatherland or your tribe or your family or your ethnicity than you do to the people of Christ. Everyone who is in Christ is more closely and permanently united to others in Christ, no matter the other associations, than we are to our nearest fellow citizen or party member or brother or sister or spouse.

But, Piper explains, many of our lesser loves have value too:

God means for us to be enmeshed in this world. We’re “not of the world,” Jesus says, but we are in the world, and we are supposed to be in it. … We may be in a city, a state, a country, and if I ask, “What is patriotism in this enmeshment?” my answer is that patriotism is a kind of love for fatherland — and I mean fatherland in a very general sense. It could be a city (Minneapolis), or a state (Minnesota), or a country (US, Brazil, China, Nigeria), or a tribe (Ojibwe, Navajo, Fulani, Kachin). And that love for these enmeshments, these belongings, is different from the general love that Christians have for everybody or for the whole earth. …

So, it seems to me that this is good, and that the goodness is implied in the Bible, and God created us to be in skin, in languages, in families, in cultures. He doesn’t mean for us to despise our skin or our language or our culture, but rather to be at home in them, and to feel good about them — of course, we have to add — up to a point. They’re all sinful, and so we never give them absolute allegiance. We never cease to be exiles and sojourners, even in our families and tribes and ethnicities — indeed, in our own bodies. …

In the end, Christ has relativized all human allegiances, all human loves. Keeping Christ supreme in our affections makes all our lesser loves better, not worse. Under his flag, it is right to be thankful to God that we have a fatherland, a tribe, a family, an old pair of slippers that just fit right.

The challenge for Christians in this time of turmoil and growing persecution is to hold fast to the whole counsel of God, rooting out heresy of all kinds; to proclaim the whole counsel of God even when the world hates us; and to come alongside those who speak truth in the public square and are mocked for doing so. We have no biblical warrant for speaking truth only when we’re guaranteed doing so will be cost-free.