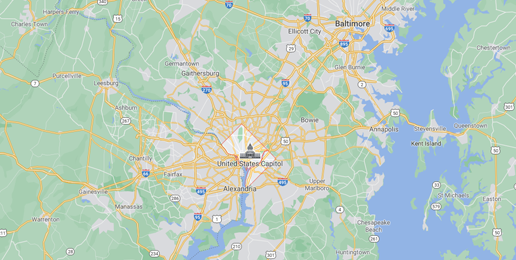 Constitutionally speaking, the United States Seat of Government cannot be an individual State.

On Thursday, April 22, however, 216 members of a powerful special interest faction within the U.S. House of Representatives, the Democratic Party, passed H.R. 51, attempting to usurp the power of the People of the United States under the Constitution, converting the District of Columbia from the federal seat of government to a state.

The Democrats’ purpose for doing so, is yet another naked power grab. Only the U.S. Constitution stands in the way of a two-seat Democratic majority in the U.S. Senate. The citizens of the District of Columbia, who do vote in Presidential elections, vote overwhelmingly (almost 90 percent) for Democrats.

“To exercise exclusive Legislation in all Cases whatsoever, over such District (not exceeding ten Miles square) as may, by Cession of particular States, and the Acceptance of Congress, become the Seat of Government of the United States”

The District of Columbia has been so ceded and accepted for the past 220 years.

“The indispensable necessity of complete authority at the seat of government, carries its own evidence with it…Without it, not only the public authority might be insulted and its proceedings interrupted with impunity; but a dependence of the members of the general government on the State comprehending the seat of the government, for protection in the exercise of their duty, might bring on the national councils an imputation of awe or influence, equally dishonorable to the government and dissatisfactory to the other members of the Confederacy…The public money expended on such places, and the public property deposited in them, requires that they should be exempt from the authority of the particular State. Nor would it be proper for the places on which the security of the entire Union may depend, to be in any degree dependent on a particular member of it.”

The general need and requirement for a U.S. “Seat of Government,” and specifically not making that Seat a state, is therefore subject to change only via U.S. Constitutional amendment.

A combination of D.C. citizens seeking more representation and Democratic politicians seeking more power for themselves, have for decades promoted D.C. statehood, and other schemes, to give political control of the seat of U.S. Government into the hands of a single State.

Such a change has nonetheless been widely recognized by both Democrats and Republicans as requiring a U.S. Constitutional amendment.

In 1964, even U.S. Attorney General Robert F. Kennedy, a Democrat, deemed efforts to bypass this requirement unconstitutional.  Numerous others in the legal community have agreed to this obvious textual requirement.

There has indeed been unusual consensus on this issue, for the entire history of U.S. Government under the Constitution.

If they so choose, current residents of the District of Columbia are free and easily able to live under the authority of one of several nearby states and still work in the Seat of Government.

In order to benefit their own special interests, many on the left will tell you that you need someone else (them) to tell you what the Constitution means.  Such is not the case.

The ability to understand the U.S. Constitution was not intended to be relegated to an ivory-towered, elite educational class.

On the contrary, it is foundational to the U.S. system of government that the common citizen, can and should, understand the U.S. Constitution, in order to self-govern and hold their representatives accountable.

Congress, under the control of both dominant political parties, has previously remained unwilling to usurp the U.S. Constitution’s authority, and unable to gain the large consensus necessary to accomplish a Constitutional amendment.

The Representatives who passed this resolution know this or are derelict in their responsibility to have done the trivial amount of research needed to know it.

Today’s Democratic Party though, has shown no restraint of honesty or integrity in its quest to rule over the People. Moreover, “progressive” activists will stop at nothing, including subverting the U.S. Constitution, to expand their own political power and advance socialism.

Promoting and passing laws that attempt to intentionally bypass the Constitutional amendment process is no small matter. To do so is a violation of an elected official’s oath to support and defend the U.S. Constitution, “so help me God.”

This is why belief in the Creator, and oaths before Him, are required of public officials in the United States.

All 216 of these men and women (and they are men and women) have violated their oath of office, and should therefore be disqualified from holding public office.

Fortunately, the filibuster, requiring 60 members to end debate on any bill in the U.S. Senate, stands firmly in the way, making passage of  H.R. 51 nearly impossible.

Our Constitution was made only for a moral and religious people.
It is wholly inadequate to the government of any other.  ~John Adams

So let us be thankful to the Creator, who is the official foundation upon which our government has been established, for protecting us from this tyranny for a time.

In addition to prayers, we the people (especially those who are moral and religious) must read, understand, and speak truth regarding the Constitution, and replace fools who do not, those who seek only power, luxury, and the elite prestige of affiliation with a political party for themselves.

Let us boldly proclaim that statehood for the District of Columbia is clearly unconstitutional and call for the removal of dishonest elected officials who would break their oath of office to support H.R. 51 or any similar government act.

Karl Marx and Black Lives Matter
b
a
x
r