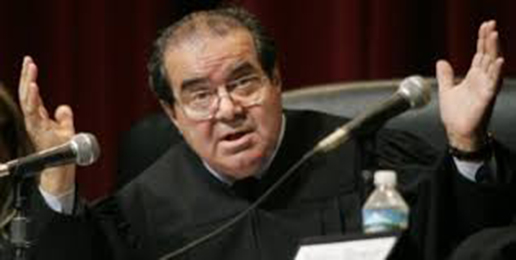 The importance of Justice Antonin Scalia, who passed away this past weekend, is based not just in what he said in his U.S. Supreme Court opinions, but how he said it.

Famous for his biting and even entertaining dissents, Scalia at times (and usually the right ones) expressed a common sense moral outrage at both his liberal and less consistent conservative colleagues. He was the ‘everyman’ in his outrage, saying what we might want to say about their departures from sound constitutional jurisprudence, but far more gifted with a legal genius shaped by an originalist view of the Constitution — and a wittiness that made conservatives smile and chuckle.

His flamboyant style of writing legal opinions made him what marketing guru Seth Godin calls a “purple cow.” He stood out in a field of more common brown cows. But more than that, it was the boldness of his style that made him an intellectual leader for originalism. In a city and system of institutions that tend to stifle and hold back the candid, he made candor about the original intent of the Constitution his brand.

He gave conservatives hope that the Constitution would not be lost for a lack of honesty or standing by principle, the shortage of which are trademarks of Washington and government.

Scalia was criticized by liberals in the legal profession, particularly academicians, for his famously biting opinions. Some claimed Scalia’s ‘zingers’ created contempt for the courts. To the contrary, it was Scalia’s deep and passionate respect for the role of the courts in our constitutional structure that led to his judicial poking at how some judges have an inflated and faulty sense of their authority.

In his dissent to the 2015 Obergefell v. Hodges decision recognizing a constitutional right to gay marriage, for example, he wrote this about the majority opinion: “I would hide my head in a bag. The Supreme Court of the United States has descended from the disciplined legal reasoning of [founding-era Supreme Court Justices] John Marshall and Joseph Story to the mystical aphorisms of the fortune cookie.”

Justice Scalia was certainly not above growing in his understanding of the Bill of Rights. Known to many as a law-and-order conservative, Scalia nevertheless wrote one of the most important decisions in recent decades about the protections guaranteed under the Fourth Amendment for searches and seizures.

[F]or most of our history the Fourth Amendment was understood to embody a particular concern for government trespass upon the areas (“persons, houses, papers, and effects”) it enumerates . . . But as we have discussed, the . . . reasonable-expectation-of-privacy test has been added to, not substituted for, the common-law trespassory test.

Scalia led for civil liberties by returning to this originalist understanding of the Fourth Amendment, which mentions property but not privacy. The common law concepts of trespass on our persons and property, and our rights in their security vis-a-vis others who seek to intrude on that security, are broader that mere privacy. Scalia recognized in this opinion that to prevent harm — but only after following basic procedures or protocols designed to limit abuses by government — may searches and seizures occur. When government neglects the notions of trespass inherent in the Fourth Amendment, even our privacy is threatened.

Scalia also became more of a First Amendment champion. His disappointing dissent in McIntryre v. Ohio Election Commission from 1995 about anonymous political speech was countered by Justice Clarence Thomas in a short treatise on the subject in the form of a concurring opinion.

Scalia would later become one of the most reliable justices on the First Amendment. In expressly targeting the “dangerous dissent” by Justice Stevens in the Citizens United case, Scalia exposed Stevens’ poor attempt to come across as using an originalist approach against the First Amendment. Stevens, no originalist, was throttled by Scalia’s scathing concurring opinion:

The Framers didn’t like corporations, the [Stevens] dissent concludes, and therefore it follows (as night the day) that corporations had no rights of free speech. Of course the Framers’ personal affection or disaffection for corporations is relevant only insofar as it can be thought to be reflected in the understood meaning of the text they enacted—not, as the dissent suggests, as a freestanding substitute for that text. But the dissent’s distortion of proper analysis is even worse than that. Though faced with a constitutional text that makes no distinction between types of speakers, the dissent feels no necessity to provide even an isolated statement from the founding era to the effect that corporations are not covered, but places the burden on petitioners to bring forward statements showing that they are (“there is not a scintilla of evidence to support the notion that anyone believed [the First Amendment ] would preclude regulatory distinctions based on the corporate form.”

As the life and work of Justice Scalia are honored and remembered, conservatives would do well to be grateful for his bold leadership on behalf of the originalist moorings of constitutional jurisprudence.

This article was originally posted at AmericanThinker.com