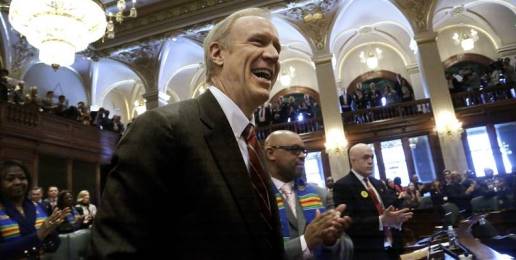 Here is some bad news: Illinoisans who support the use of your money to pay for abortions have been calling their legislators asking them to support HB 40. A vote on this bill could come at any time.

The good news is that this legislation can be defeated, but your help and prayers are needed immediately. Your local state legislators need to hear from you and everyone you can encourage to call or email their legislative offices.

Here is part of a statement issued by Brian Burch, who is the president of CatholicVote.org:

“We have been following the developments surrounding H.B. 40, a new spending bill pending before the Illinois General Assembly that, if passed, would authorize the use of state dollars to fund abortion services for qualified Medicaid recipients. Should Governor Rauner sign the bill as it is currently written, pro-life voters will be left with no choice but to oppose his candidacy next year.

“We have been in conversation with pro-life groups around the state. The overwhelming consensus is that support for any legislation that would coerce Illinois taxpayers into directly funding abortion would disqualify him from receiving their support.

“The state owes $10 billion in unpaid bills, with tens of billions more in unfunded liabilities. Yet now politicians want to spend scarce state resources to pay for abortions. Rauner’s support of this reckless bill would rip apart the Republican Party and destroy any chance of his re-election.

“Let me be clear. If Governor Rauner signs the bill as written, we will urge our members along with every pro-life voter in the state to support an alternative candidate — or to abstain from voting for his re-election. And we won’t be the only group doing so.”

Those are some pretty tough words–words that the Illinois Family Institute and its sister organization Illinois Family Action applaud. We would like to see that threat extended to any member of the General Assembly that votes to use taxpayer dollars to fund abortions.

There is no more critical human rights issue than the issue of protecting incipient human life from intentional destruction in the womb. The moral offense of legalized feticide is compounded when the hard-earned money of taxpayers is used to fund the killing of humans.

Neither the state of development, dependency status, imperfections, or location of human beings grants to other humans the moral right to end their lives. When the reproductive rights of women come into direct conflict with the right of their offspring to exist, the right to existence takes precedence in that it is a right of a higher moral order.

Any government leader who doesn’t recognize the intrinsic value and rights of all humans doesn’t deserve the support of citizens or public office.

We agree with this statement from eminent legal scholar Professor Robert George:

Maintaining and solidifying the pro-life…stance of the Republican Party is critical. That’s why tactical voting, including voting for bad Democrats over bad Republicans, is IN CERTAIN CIRCUMSTANCES (e.g., where the election of a Democrat does not jeopardize Republican control of a legislative house), morally legitimate and perhaps even advisable. We must not let the pro-abortion…movements strengthen their positions in the Republican Party.

We can make a difference, but only if our legislators hear from their pro-life constituents. We hope to convince enough of them not to vote for this big-government, big-abortion bill. We must prevent the sponsor of this legislation from getting enough “yea” votes to pass it.

Our failure to act with as much energy as the other side too often is the difference between victory or defeat–and in this case life or death.

Here is Cardinal Blase Cupich, the Archbishop of Chicago, weighing in on HB 40:

We have raised our voices in the past for those who have no voice, whether they be the
immigrant or the refugee, the poor, or the unemployed. We now need to speak for the children in the womb, who are the weakest among us.

We need to let our elected officials know that taxpayers should not be forced to fund the
taking of human life. In fact, tax money should be used to fund prenatal services for the poor
and child care for working mothers, as well as expand health-care options for those in need.
Please join me in advocating for all life by urging your state representative to reject HB 40 and work instead to pass a budget that funds all essential services.

Take ACTION: Please send a message to your state representative to ask him/her to vote AGAINST this pro-abortion bill. This legislation is HB 40 – a bill that would authorize the use of tax dollars to pay for abortions in Illinois through Medicaid and state government health care insurance plans. It is sponsored by State Representative Sara Feigenholtz (D-Chicago).  This bill would reverse the current law which bans taxpayer funding of abortion under Medicaid.

Please also call your state representative during the week to make sure he/she knows how important this issue is to you and your family. The Capitol switchboard number is (217) 782-2000.

Pray for the ultimate demise of HB 40 and all anti-life legislation.