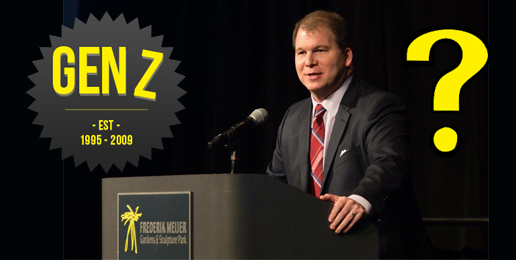 America’s founders believed in God and His word, and predicated our founding documents on those immutable, biblical principles.

Though Leftists love to spout revisionist nonsense about many of the Founders being deists or worse, those accusations don’t hold water when faced with the weight of those early patriots’ own words and actions.

Thomas Jefferson, often upheld as vying for the least religious spot amongst the Founders, wrote:

I am a real Christian – that is to say, a disciple of the doctrines of Jesus Christ.1

Many people are surprised to learn that the United States Capitol regularly served as a church building; a practice that began even before Congress officially moved into the building and lasted until well after the Civil War.

On December 4, 1800, Congress approved the use of the Capitol building as a church building.

Significantly, Jefferson attended that Capitol church service just two days after he penned his famous letter containing the “wall of separation between church and state” metaphor.

Now, just over two centuries later, many Americans maintain a post-Christian worldview. As written at IMB.org:

In a Christian culture, the majority of people have been shaped by Christianity, and it shows in how they live their lives. Post-Christianity, just as it sounds, is a culture that was once shaped by the Christian faith and worldview, but has since moved away from the primacy of such a worldview.

In a post-Christian society the Biblical story that once shaped culture is no longer the narrative that gives meaning to life.

The Barna Group conducted studies beginning in late 2016 and ending in mid-2017 concerning young people and their faith worldview; the findings are especially troubling.

The study sampling and definition:

Two nationally representative studies of teens were conducted. The first was conducted using an online consumer panel November 4–16, 2016, and included 1,490 U.S. teenagers 13 to 18 years old. The second was conducted July 7–18, 2017, and also used an online consumer panel, which included 507 U.S. teenagers 13 to 18 years old. The data from both surveys were minimally weighted to known U.S. Census data in order to be representative of ethnicity, gender, age and region.

One nationally representative study of 1,517 U.S. adults ages 19 and older was conducted using an online panel November 4–16, 2016. The data were minimally weighted to known U.S. Census data in order to be representative of ethnicity, gender, age and region.

Some of the findings?

Gen Z is the first purely Post-Christian generation — the percentage of Gen-Z identifying as atheist is DOUBLE the U.S. adult population.

The article presenting the findings (with a related book available for purchase), “Atheism Doubles Among Generation Z,” notes:

For Gen Z, “atheist” is no longer a dirty word: The percentage of teens who identify as such is double that of the general population (13% vs. 6% of all adults). The proportion that identifies as Christian likewise drops from generation to generation. Three out of four Boomers are Protestant or Catholic Christians (75%), while just three in five 13- to 18-year-olds say they are some kind of Christian (59%). 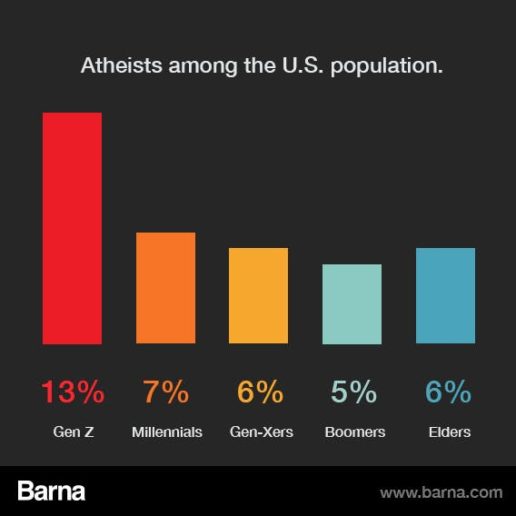 The decline in a Christian-based worldview is illustrated in the graphic posted to the right.

Appallingly, over one third of Gen Z don’t believe it’s possible to know if there really is a God.

What happened to the country whose motto is “In God we trust”?

Noah Webster, the “Father of American Scholarship and Education,” wrote:

The religion which has introduced civil liberty is the religion of Christ and His apostles… This is genuine Christianity and to this we owe our free constitutions of government.2

The Christian religion… is the basis, or rather the source, of all genuine freedom in government… I am persuaded that no civil government of a republican form can exist and be durable in which the principles of Christianity have not a controlling influence.3

And, George Washington, the Father of Our Nation wrote:

Yet in the span of just over 200 years, the youth of America knows next to nothing about God and the Bible. Church attendance, at least in mainline Protestant and Catholic churches, is declining precipitously.

What is the answer? Is it too late?

The Apostle Peter admonished us:

But in your hearts revere Christ as Lord. Always be prepared to give an answer to everyone who asks you to give the reason for the hope that you have. But do this with gentleness and respect. (1 Peter 3:15)

“Always be prepared to give an answer” — the underlying precept of apologetics, the defense of the faith.

And a vital part of Apologetics is knowing your worldview.

Gen Z may be overwhelmingly lost and devoid of hope, but we believers have the answer that restores hope. We must be ready to give that answer to a generation that sorely needs hope. 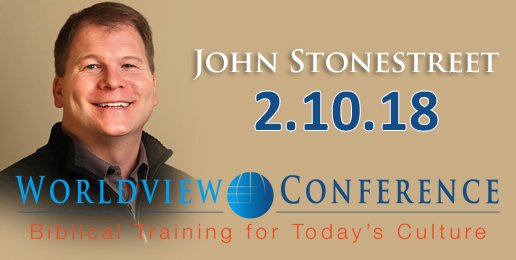 Just who is John and why is he a tremendous resource for such an event?

As President of the Colson Center for Christian Worldview, John’s passion is to illuminate a biblical worldview for today’s culture. He’s a speaker, writer, cultural commentator, and collaborator of worldview initiatives.

John directs conferences and curriculum projects, speaks to groups nationally and internationally, consults on worldview education for schools and churches, and appears frequently on web and radio broadcasts.

John is the co-host with Eric Metaxas of Breakpoint Radio, the Christian worldview radio program founded by the late Chuck Colson.

The Founders invested their hope and their faith into this burgeoning Republic, infusing our Declaration of Independence and U.S. Constitution with biblical precepts and a Judeo-Christian worldview.

Now is the time to recapture the explicit understanding of that worldview, and to share that hope and understanding with a lost and hopeless generation.