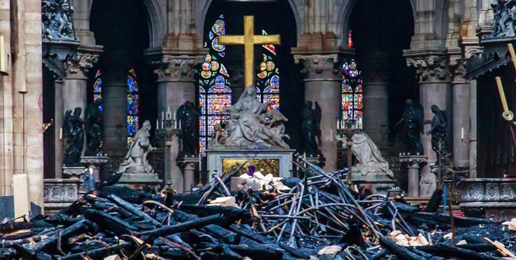 Even many who are little disposed to viewing life’s vicissitudes symbolically found themselves wondering about the meaning of the inferno that consumed much of Notre Dame Cathedral in Paris during Holy Week. What does the gutting of this magnificent architectural symbol of man’s adoration of the Creator of all things beautiful signify?

What we know is that France, indeed all Western Europe, has lost its spiritual way. While man-made symbols fashioned of wood and stone remain of a once-substantive and sustaining faith, the substance of that faith is long gone, burned away by impoverished philosophies and fallen man’s appetites. All that has remained of the fervent faith that animated the early church is a burned-out shell.

America—always in thrall to all things European—is sashaying benightedly after our uber-cool Parisian brothers and sisters. Recent studies have revealed the tragic irreligiosity of Americans. Is it any wonder that as we have lost our faith, marriage—the picture of Christ and the church—has been destroyed; millions of women have ordered the deaths of their own babies; children are being raised without mothers and fathers; homosexuality is celebrated; teens are being chemically sterilized and surgically mutilated; perverse men are reading stories to toddlers in our public libraries; government schools teach our little ones that in order to be compassionate, they must undress in front of opposite-sex peers; obscene language and images pollute the American landscape; and the ravenous appetite to be rendered insensate grows.

Early this week, a writer in the Chicago Tribune wrote about the symbolism of Notre Dame, saying it “symbolizes survival” and “it connects people through the centuries and… from all over the globe.” She continued, “Even the most casual tourist can’t help but feel in the presence of something far greater than a building. At Notre Dame, you’re in the presence of time itself.”

Not once did she mention the Creator of time itself. Her glaring omission neutered her lament for the calamitous destruction of Notre Dame .

Maybe we don’t deserve such symbols of beauty and creativity that have their source in God, whom we have forgotten or worse, replaced with idols. Maybe we needed a shocking event to show us that the church in Western civilizations was gutted long ago.