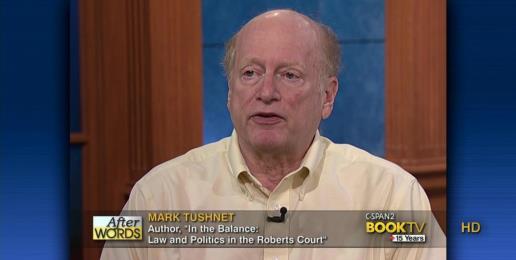 Conservative friends, if it weren’t clear to you already that the halcyon days for theologically orthodox people of faith in America are over, read the ominous, hostile, and arrogant words of Mark Tushnet, William Nelson Cromwell professor of law at Harvard Law School:

The culture wars are over; they lost, we won…. For liberals, the question now is how to deal with the losers in the culture wars. That’s mostly a question of tactics. My own judgment is that taking a hard line (“You lost, live with it”) is better than trying to accommodate the losers, who—remember—defended, and are defending, positions that liberals regard as having no normative pull at all. Trying to be nice to the losers didn’t work well after the Civil War, nor after Brown. (And taking a hard line seemed to work reasonably well in Germany and Japan after 1945.) I should note that LGBT activists in particular seem to have settled on the hard-line approach, while some liberal academics defend more accommodating approaches. When specific battles in the culture wars were being fought, it might have made sense to try to be accommodating after a local victory, because other related fights were going on, and a hard line might have stiffened the opposition in those fights. But the war’s over, and we won.

Conservatives are the equivalent of racists and Nazis because they believe human beings whose lives begin at conception have a right to exist and that marriage has an intrinsic nature central to which is sexual differentiation. No more need for politically expedient rhetorical deception about tolerance and diversity. Carpe Diem, Tushnet proclaims. To the victors belong the spoils, which to “progressives” like Tushnet just might include the presumptive “right” to abrogate the religious liberty of conservative losers.

What accounts for Tushnet’s cocksureness? Tushnet makes clear that it derives from the current composition of the courts:

Several generations of law students and their teachers grew up with federal courts dominated by conservatives. Not surprisingly, they found themselves wandering in the wilderness, looking for any sign of hope. The result: Defensive-crouch constitutionalism, with every liberal position asserted nervously, its proponents looking over their shoulders for retaliation by conservatives….

It’s time to stop. Right now more than half of the judges sitting on the courts of appeals were appointed by Democratic presidents…the same appears to be true of the district courts. And, those judges no longer have to be worried about reversal by the Supreme Court if they take aggressively liberal positions.

Now that the judiciary is controlled by liberals, Tushnet argues that “Liberals should be compiling lists of cases to be overruled at the first opportunity on the ground that they were wrong the day they were decided,” and that they should “Aggressively exploit the ambiguities and loopholes in unfavorable precedents that aren’t worth overruling” [emphasis Tushnet’s].

Tushnet clerked for Thurgood Marshall and was instrumental in shaping and articulating Marshall’s position in Roe v. Wade which, in turn, influenced Harry Blackmun. Tushnet, in a  “significant letter” written for Marshall and sent to Harry Blackmun said this:

I am inclined to agree that drawing the line at viability accommodates the interests at stake better than drawing it at the end of the first trimester. Given the difficulties which many women may have in believing that they are pregnant and in deciding to seek an abortion, I fear that the earlier date may not in practice serve the interests of those women, which your opinion does seek to serve.

It is implicit in your opinion that at some point the State’s interest in preserving the potential life of the unborn child overrides any individual interests of the women. I would be disturbed if that point were set before viability, and I am afraid that the opinion’s present focus on the end of the first trimester would lead states to prohibit abortions completely at any later date.

Professor Tushnet, a prolific writer and non-observant Jew, is the father of Eve Tushnet, a prolific writer and theologically orthodox Catholic who identifies as a lesbian but because of her deep faith, has chosen a life of celibacy. Eve Tushnet was “raised somewhere between atheism and Reform Judaism,” and “entered the Catholic Church in 1998, during her sophomore year at Yale University.”

Is Mark Tushnet’s daughter one of the losers against whom Professor Tushnet seeks a hard line?

The Obama Administration’s executive overreach, criticized even by liberal legal scholar Jonathan Turley, has alerted many conservatives to the imbalance of power between the legislative and executive branches which in theory should be co-equal. “Progressives” are taking their gloves off and putting their jackboots on. They’re hungry and seeking to devour whatever morsels of liberty conservatives yet retain. Perhaps Tushnet’s clanging voice will be the alarm needed to arouse slumbering conservatives before their plate is empty and progressives arrive at our church doors slavering at the cup and gnawing at the host.

Can you support our work with
a tax-deductible donation?