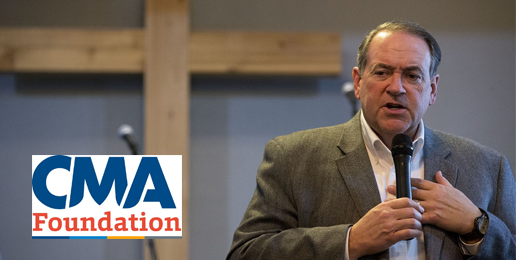 Homosexual head honcho in the country music industry, Jason Owen, threw a tantrum over the appointment of Mike Huckabee to serve on the board of the philanthropic arm of the Country Music Association (CMA). Owen was furious that Huckabee holds the theologically orthodox belief that homosexuality is a sin and that Huckabee supports the NRA.

Owen and his equally intolerant allies were successful in forcing Huckabee to step down less than 24 hours after his appointment, with Owen threatening to take his money and his musicians and go home if Huckabee stayed:

“It is with a heavy heart that I must let you know moving forward, Sandbox and Monument will no longer support the CMA Foundation in any way (this includes everyone we represent collectively) considering the heartbreaking news shared today regarding Mike Huckabee appointee/elected to the CMA Foundation. Further, we find it hard to support the organization as a whole as a result. As you may know I have a child and two on the way. This man has made it clear that my family is not welcome in his America. And the CMA has opened their arms to him, making him feel welcome and relevant. Huckabee speaks of the sort of things that would suggest my family is morally beneath his and uses language that has a profoundly negative impact upon young people all across this country. Not to mention how harmful and damaging his deep involvement with the NRA is. What a shameful choice. I will not participate in any organization that elevates people like this to positions that amplify their sick voices. This was a detrimentally poor choice by the CMA and it’s [sic] leaders.

I only wish the best for you and I know how hard you work for the foundation but a grossly offensive decision like this only makes your job harder and diminishes the foundation’s purpose.

In Owen’s perverse world, homosexuality and intentionally motherless and fatherless children are in. The Bible, the Constitution, and diversity are out.

Let’s not forget that it was Jesus who established marriage as a man-woman union—not Mike Huckabee. While Owen and his allies may not be theologically orthodox Christians, many Americans—including many country music fans—are. And let’s not forget that for theologically orthodox Christians, their faith is as central to their identities as homoeroticism is to the identities of “gays” and “lesbians.”

Owen believes that those who express the theologically orthodox Christian view that marriage is a male-female union are also saying that homosexual couples are “not welcome in America.” So, does Owen apply that principle consistently?

What about all the homosexuals who, before Obergefelle, said that marriage is the union of two people who love each other? Are they guilty of making polyamorists who would like to marry feel their families are “not welcome in America”? Are their voices “sick”?

What about men and women who experience “Genetic Sexual Attraction” and are in love with close blood relatives (remember, love is love)? Is it “grossly offensive” and “shameful” to express opposition to adult consensual incest?

More broadly, is helping people feel good about all their life choices some sort of moral principle that subsumes all other moral claims? Does everyone have an obligation to refrain from expressing moral propositions with which others may disagree? If so, does that apply to Owen and his ideological co-conspirators?

Like all homosexual tacticians, Owen appeals to emotions by referring to his children, saying that Huckabee’s beliefs suggest Owen’s “family is morally beneath” Huckabee’s.” Huckabee’s beliefs concern types of family structures, and yes, theologically orthodox Christians believe that a family headed by two men or two women in a homoerotic relationship is morally inferior to a family headed by a man and woman. That idea too comes from Scripture, which speaks in unequivocal and plain language about homoerotic activity, marriage, the roles of mothers and fathers, and the needs of children. If Owen has a beef with those beliefs, he should take it up with the Almighty.

Singer and lesbian Chely Wright self-righteously chastises Huckabee: “[Y]oung people will be shattered, yet again, to hear someone with so much power saying the things you’re saying about who God made them to be.” It’s preposterous to claim that God “made” anyone to desire that which He condemns. I don’t know where Wright gets her theology, but it’s not from Scripture.

Word to Owen et al.: Love is inseparable from truth. If it’s true that homosexual activity is immoral, if it’s true that marriage has a nature central to which is sexual complementarity, if it’s true that children have a right to be raised by a mother and a father whenever possible, then expressing those views is not only permissible but also good. If the Bible is true, the ideology of Owen and Wright will have a “profoundly negative impact upon young people”—eternally.

P.S. Our get-out-the-vote campaign is up and running. We are distributing the IFI Primary Voter Guide to hundreds of churches, civic groups and tea party organizations. Will you financially support our endeavor to educate Illinois voters and promote family values?