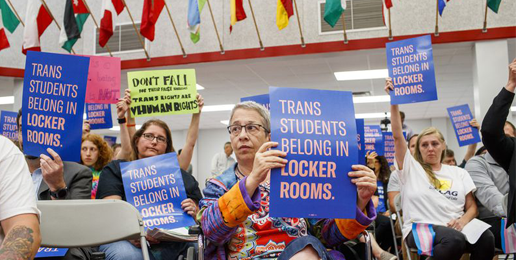 What All Conservatives Must Learn from District 211 “Trans” Activism
Written By Laurie Higgins   |   10.03.19
PRINT

Folks, if you hope to defeat “trans” activism in your public schools, public libraries, the Springfield Swamp, and halls of Congress, you must first find those old rubbery spines that have been gathering dust in your attics. Then muster some courage to speak truth to Leftists who have been winning gold medals in epithet-hurling. Their tongues are now the strongest part of their bodies, while apparently their brains are the weakest. Try getting them to answer a few foundational questions that emerge from their incoherent, science-denying “trans”-ideology and watch them bob and weave, evasively changing subjects in between screeching “hater” at you. Just keep repeating to yourself the old adage your parents taught you: Sticks and stones may break your bones, but names will never hurt you. More on those foundational questions shortly.

Last week, I wrote about the purchase of the District 211 school board seats in 2017 by Laurence (aka “Lana”) Wachowski, “trans” director of the Matrix movies who lives in Chicago; a “trans” architect from Pennsylvania;  the lesbian head honcho of the Gay, Lesbian and Straight Education Network from New York; a state senator from Chicago; a homosexual CEO from D.C.; a “trans” activist from Maryland; a homosexual activist from Chicago; and two “trans” activists from Chicago who secretly funded the defeat of three excellent school board candidates.

Since then, it’s been revealed that Illinois’ premier “LGBTQ” activist organization, the grossly misnamed Equality Illinois, sent a representative to the District 211 School Board meeting on September 19 at which the proposal to sexually integrate all locker rooms was discussed. Equality Illinois boasted on its website about sending its “civic engagement coordinator,” Anthony Charles Galloway, who is the former Project Coordinator at Planned Parenthood of the St. Louis Region & Southwest Missouri.

Last Monday, Vicki Wilson, president of D211 Parents for Privacy, and Tracey Salvatore, an epithet-hurling mother of two District 211 elementary school children, were invited to appear on WTTW’s Chicago Tonight to be interviewed by Carol Marin.

Salvatore is the activist I mentioned in last week’s article who, instead of explaining exactly why private spaces should correspond to “gender identity” as opposed to biological sex, hurled epithets at parents who believe girls and boys should not be allowed to access the private spaces of opposite-sex peers.

Before I get to what Tracey Salvatore said on Chicago Tonight, it bears mentioning that for some odd reason her coach—er, I mean, escort to the Chicago Tonight studio was Ed Yohnka, communications director for the ACLU in Chicago. I wonder why Salvatore invited him?

Salvatore managed to refrain from her customary hate speech when making her points on Chicago Tonight. Perhaps her escort helped her avoid that pitfall.

I do feel that it fell short of full inclusion, full equity, full access just by singling out transgender students as requiring them to use the privacy curtains.

Well, it rightly did prohibit “full access” because the person seeking “full access” to the girls’ locker room was a biological boy. But “transgender” students are not being “singled” out. The boy to whom Salvatore was referring singled himself out by asking for special treatment. He asked to be allowed unrestricted access to the girls’ locker room—something other boys are not allowed.

“Trans”-identifying persons, like all other humans, have a sex, which is objective, immutable, and meaningful. Schools, like every other place of public accommodation, have sex-separated spaces in which humans engage in personal bodily acts like undressing and going to the bathroom. Treating a boy as a boy is the epitome of equity. Conversely, including a biological boy in girls’ private spaces is the antithesis of fairness, impartiality, and equity. Treating a boy as if he is a girl in girls’ private spaces means treating him specially and violates the privacy rights of girls.

Commitments to “inclusion” and “equity” do not require that persons who wish they were the sex they aren’t have access to opposite-sex private spaces. Their feelings about their maleness or femaleness do not grant them the right to dictate that private spaces no longer correspond to biological sex.

Grotesquely exploiting the words of Supreme Court Justice Earl Warren in Brown v. Board of Education, Salvatore said, “separate but equal is not equal.” Warren said this:

We conclude that in the field of public education the doctrine of “separate but equal” has no place. Separate educational facilities are inherently unequal.

Segregating blacks from whites in schools or other places of public accommodation was a pernicious practice based on the erroneous belief that whites and blacks are by nature different and based on white hatred of blacks. Separating boys from girls in private spaces is based on the true belief that boys and girls are sexually different and that those differences matter when undressing and engaged in personal bodily functions. The desire to be free of the presence of persons of the opposite sex when undressing has nothing to do with hatred. Salvatore’s claim is patently foolish.

Transgender individuals are not a threat…. Transgender people are not a safety concern to anyone, not in a locker room, not on the street, not anywhere else.

And what about students who have been victims of sexual abuse. Estimates are that 1 in 4 girls (and 1 in 6 boys) will be sexually abused by the age of 18, which means in District 211, there are likely 1,500 girls (and 1,000 boys) who are victims of sexual abuse. In contrast, the Williams Institute estimates that .7 percent of teens identify as “trans,” which would mean that there are about 42 biological boys who identify as “trans”  in District 211. Many, perhaps most, sexually abused girls feel uncomfortable changing clothes in the presence of opposite-sex persons. They should not be compelled to leave their own locker rooms in order to feel safe.

Though the issue of protecting the feelings of children who were victims of sexual abuses is critical, it is not the primary issue either.

The primary, foundational issue is the meaning of sexual differentiation. Do our sexed bodies have meaning or not? Cultural regressives, like Salvatore and school board member/sexpert Kim Cavill, essentially say that physical embodiment as male or female has no intrinsic meaning relative to feelings of modesty and the desire for privacy when engaged in personal acts like undressing and going to the bathroom, which is absurd and destructive nonsense. Three times Salvatore mentioned “respect,” and none of those times referred to the respect due to students who have a right to a locker rooms free from the presence of opposite sex peers.

Salvatore then made this baffling statement:

I think people have learned that transgender individuals are just like human beings.

Well, “transgender” individuals are not just “like” human beings. They actually are human beings, and I don’t know a single person who thinks otherwise. Recognizing “trans”-identifying persons as humans includes recognizing that they have a sex and that in private spaces their sexual identity is all that matters. Prohibiting students from using opposite-sex private facilities does not deny their existence or their humanness.

Salvatore assures the Chicago Tonight viewing audience that “the reality is that people are not getting naked in the locker room.” That may be true, but it’s hard to believe that students who are taking a swim class or are on swim teams, diving teams, or water polo teams are never naked as they change from clothes to swimsuits. That, however, is beside the point.

Finally, here are the questions that every school board member, administrator, and supporter of the sexual integration of private spaces should be required to answer before any votes on policy proposals are taken:

So many essential questions asked by no one even as we deny human nature and the fundamental rights of girls and boys.

Correction: This article has been corrected with regard to estimates of number of abuse victims and of teen boys who identify as “trans.”