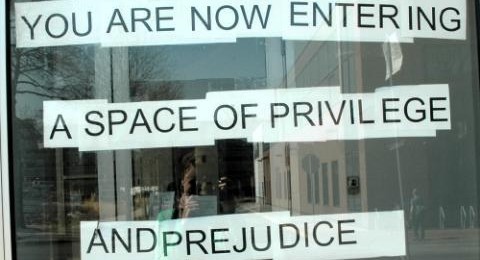 You can bet your bottom dollar that if there’s a way to use public money to promote leftwing political or educational theories, District 113 (Highland Park and Deerfield High Schools) will find it.

Superintendent George Fornero and Director of Diversity Andrea Johnson have managed to waste thousands of taxpayer dollars to promote Critical Race Theory/Critical Pedagogy under the guise of “Equity and Excellence.”

Last month District 113 — along with many other school districts around the country — used public money to send district employees to yet another “White Privilege Conference,” this time in Minneapolis.

In an article for the Minnesota Star Tribune, Katherine Kersten, offers this description of the conference:

To find out (what parents and taxpayers can expect), we can peruse the keynote address for the 2009 conference. It was delivered by “social justice educator” Paul Kivel and appeared in the conference journal, “Understanding and Dismantling Privilege.”

Kivel begins with what passes these days as a prayer: “I want to acknowledge the creative spirits in the world that nurture and sustain us and that connect us to each other and to the plant and animal life around us.”

Then he winds up for a fire-and-brimstone sermon. We Americans “are completely dependent on U.S. imperialism and war to sustain our daily lives.”

Our schools, too, are riddled with racial bias. “Our school system has been set up … to perpetuate white supremacy and white privilege.” Poor and minority students “do not drop out — they are pushed out.”

What’s gone wrong? For one thing, Christianity has far too much influence. It “has played a key role in developing and justifying sources of oppression” such as “violence and genocide,” Kivel tells us, and is “the beginning of modern or biological racism.”

But don’t despair, he counsels. We must look beyond our “declining empire” to “exciting progressive developments” in Hugo Chavez’sVenezuela — among them, “land reform and redistribution of wealth, neighborhood committees, recognition of women’s unpaid labor, end of spanking.”

In addition to Kivel, who spoke again this year, here are just a few of the other 2011 speakers whose livelihoods we taxpaying chumps subsidize and whose feckless ideas permeate public school curricula:

Z! Haukeness (yes, that’s actually his name): Haukeness is a “transgender” who admits to looking “pretty masculine” and asserts that he is “gender queer, gender non-conforming.” He explains that he became involved in working for racial justice after having a radical seventh grade teacher who told his class that “All of you are racists and your parents are too.” (Read more HERE.)

Jessica Vasques Torres: According to diversity consultant Jamie Utt, who loved the conference, lesbian Torres asked “Why do we, as queer folks want to join an institution with a 50% failure rate? Shouldn’t our goal be to deconstruct the very destructive, sexist, and heterosexist institution of marriage itself?” (Read more HERE.)

Roxanne Dunbar-Ortiz: According to Utt, Dunbar-Ortiz said that “‘The colonists who came to this country might as well have been wearing Nazi uniforms,'” in that “Their effect was the same on the indigenous people of this land.”

Waziyatawin: Utt learned from Ms. Waziyatawin that “Many people don’t want to hear the truth about what has been done to black, brown, and red people on these lands because it challenge the very system of supremacy on which our lives are built. The United States itself is built upon oppression. That can’t be reformed. The only antidote to a colonial government is to end the colonial government.”

In a speech given in another context, Waziyatawin argues that Minnesota’s celebration of its sesquicentennial was “really a rationalization for pretty horrific crimes” including “genocide” and “ethnic cleansing.”

Since I’m a District 113 taxpayer, I emailed the administration with a few questions about district participation in this conference, and demonstrating their usual commitment to transparency, the administration told me I would have to file a Freedom of Information Act (FOIA) request in order to get my questions answered. I complied.

What I learned is that District 113 applied for a grant through the federal “Title II Teacher and Principal Training and Recruiting Fund” which provides “funds to increase student academic achievement by elevating teacher and principal quality through recruitment, hiring, and retention strategies and to hold local educational agencies and schools accountable for improvements in student academic achievement.”

In the application, Diversity Director Andrea Johnson wrote that the district’s goal was to “work toward eliminating the racial predictability of which students fall into the highest and lowest achievement categories by continuing our Equity and Excellence work.”

In answer to the question on the grant application regarding how the district will evaluate the success of the programs on which they spend federal funds, Johnson wrote: “Through classroom walk-throughs, equity audits, and focus groups, we will assess our progress toward this goal. Additionally, we will administer the Intercultural Development Inventory assessment and collect data on the cultural competency of our staff who have gone through the training.”

They will also walk through classrooms, perform equity audits (whatever that means) and have focus groups in which they will “assess” their progress. In the 1970s, I think that was called navel-gazing.

Since District 113 has over the course of a decade spent well over $100,000 of taxpayer money on Critical Race Theory — I mean, “equity and excellence” — isn’t it about time to provide some objective data to prove it has closed the racial achievement gap? The administration doesn’t need to test employees for their “cultural competency.” The administration needs to prove that the money they’ve spent promoting Critical Race Theory and Critical Pedagogy through Peggy McIntosh’s SEED program, Lee Mun Wah’s Stir Fry Seminars, Glenn Singleton’s Courageous Conversations, and the White Privilege Conferences has had a measurable impact on student achievement (I can’t help but wonder what the Hispanic parents of District 113 students would think of the district spending over $100,000 of money that is intended to help their children score better on standardized tests to instead teach staff and faculty that whites, males, and heterosexuals are oppressive and often genocidal).

It should come as no surprise that a district so enamored of Critical Race Theory and Critical Pedagogy that it would annually ship employees all over the country to attend the White Privilege Conference would also have a teacher who presents at it. Deerfield High School English teacher and Critical Race Theory disciple Christine Saxman has been a presenter at the 10th, 11th, and 12th White Privilege Conferences.

To my knowledge, none of Deerfield’s or Highland Park’s many well-educated community members demand any evidence to justify years of expenditures on workshops, conferences, seminars, meetings, and “diversity” consultants. Thousands of dollars of public funds have been swallowed up by efforts to convince district employees that the racial achievement gap is centrally caused by the whiteness of white people. While skipping along the primrose path to “equity and excellence” Nirvana, our Critical Race Theorists stuff their pockets with the hard-earned money of people whom they accuse of being racist, sexist, homophobic oppressors.

One curious phenomenon continually overlooked in District 113 — a district that prides itself on fostering critical thinking, tolerance, diversity, and intellectual rigor — is that not once has the administration offered a professional development opportunity to staff and faculty in which they study the work of scholars who criticize Critical Race Theory, Critical Pedagogy, or the intellectual assumptions of what’s euphemistically called “teaching for social justice.”

Forward this email to a friend.