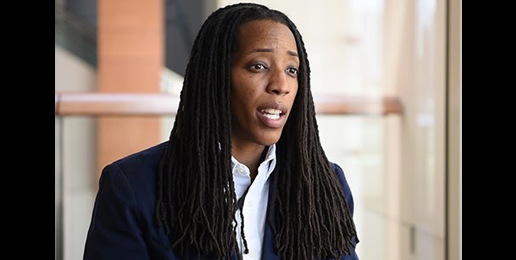 During the decades-long slumber of conservatives, the woke have been continually hatching plans to abolish America piece by piece, replacing it with woke AmeriKa. Leftist control of culture is now virtually absolute, especially over education. Leftists control university departments of education where they turn impressionable students into revolutionary disciples who sashay into government schools armed with notebooks full of lesson plans and brains full of leftist dogma on race, sexuality, equity, oppression, and American history. From their ivory tower perches “education” professors launch not only missionaries but also professional journals, activist organizations, and blogs. Just as liberalism birthed “progressivism,” “progressivism” has now birthed anarchy in the form of the new “abolition” movement.

One of the chief proponents of the abolition movement is Bettina Love, associate professor in the Department of Educational Theory and Practice at the University of Georgia. Love is a black lesbian who co-founded the Abolitionist Teaching Network in 2020. In describing “abolitionist education,” Love makes clear its roots in critical race theory:

It comes from a critical race lens and applies methods like protest, boycotting, and calling out other teachers who are racist, homophobic, or Islamophobic.

When asked in an interview if she wants to abolish school, Love declares adamantly, “Yes” and defends her goal by alleging schools are irremediably infected by white privilege:

The way y’all [i.e., whites) set this (i.e., public school system) up is not fair. The way you set this up, some people get to play, some people don’t get to play. … [N]ot only do we not get to play, there are now structures, institutions, and conditions that make sure that I can’t play and my children’s children can’t play. So, what we’re asking for is to start over. … What makes abolition so radical is that now we’re saying, “Oh yeah, and we want to take away your toys too.” … We want a playing field that says, “the things that you have, the privileges that you have?  You no longer have those privileges because you didn’t earn them. And since you didn’t earn them, you need to give them up.”

And Love will not tolerate anything less than an immediate and wholesale adoption of her QAnon-esque belief that a structure of white privilege makes academic achievement for “queers” and persons of color impossible:

Love asserts that her critical theory-infused ideology is the interpretive lens that government schools must use to shape how children view sex, gender roles, cross-sex impersonation, Islam, and homosexuality:

If children of color are attending schools that do not help them interpret the racist, sexist, Islamophobic, patriarchal, homophobic, transphobic and xenophobic world they are living in, then not only is the status quo maintained, but Whiteness is never disrupted; therefore, White supremacy stays on track.

While the Abolitionist Teaching Network was founded in 2020, Love’s been at this work for much longer. Speaking https://studentaffairs.psu.edu/spiritual at Penn State in 2015, Love said, “the world free of oppression is going to be led by Queer folk.”

Even more troubling, in a 2013 interview, Love shared that she speaks in schools a lot and that she—as a lesbian—seeks to be a role model for young girls.

According to her CV, Love’s areas of “expertise“ are “hip-hop based education, black girlhood, diversity and social justice, hip-hop feminism [and] critical media literacy.” She speaks on these topics as well as “abolitionist teaching,” racist “anti-racism,” and “queer youth.”

The Abolitionist Teaching Network is staffed by other unsuitable role models for children, including its communications and outreach manager, the “non-binary gender fluid” Ominira Mars whose pronouns are “they/them/theirs. She is a “Black southern queer-feminist student, educator, and writer” who is “passionate about political education, abolition, and building strategic counter-narratives through story-telling and radical imagination to disrupt systems of oppression.”

One of the “resources for agitators” recommended by Love’s Abolitionist Teaching Network is the Abolition Journal which fills in the contours of the radical plans of new abolitionists, plans that include “decolonization” and “abolition”:

We understand abolition as an undoing of borders, prisons, police, settler states, heteropatriarchy, capitalism, colonialism and imperialism and all other forms of authority that are tangled together to produce the era we live in.

There you have it, the piece-by-piece destruction of America. Compare that dream to the dream of Martin Luther King Jr.

One of the organizations Love heartily endorses is Assata’s Daughters (AD) named after the terrorist Assata Shakur who was a member of the Black Panther Party and an accomplice in the murder of New Jersey state trooper Werner Foerster in 1973, who left behind a young wife and three-year-old daughter. After being convicted, Shakur escaped from prison and eventually sought asylum in Cuba where she has lived openly since 1984.

AD … was founded, planned, and operated by Black women, femmes, and gender non-conforming people to carry on the tradition of radical liberatory activism encompassed by Assata Shakur, to train up others in the radical political tradition of Black feminism, and to learn how to organize on the ground around the demand for Black liberation, particularly a demand for abolition. …

AD … has now broadened its scope to provide lessons to young men and boys on toxic notions of masculinity, [and] dismantling patriarchal systems of oppression.

AD provides a “political education program” to children between the ages of 6-13 “to deepen their political analysis of power and oppression.” Through this program, they introduce children “to Assata Shakur and her revolutionary politic” and “provide opportunities and support to help them tap into their skills as leaders and future organizers in the larger movement for Black liberation.”

How many conservative organizations offer programs to help teens understand the specious arguments used by cultural regressives to normalize racism or disordered sexuality?

Another organization Love admires is Critical Resistance whose toolkit for abolishing policing provides a manual for the further devastation of crime-ridden communities:

No mention of fatherless families or absence of faith in Jesus Christ as root causes of anti-social behavior by boys and young men. Public expressions of truth are vanishing as anarchists become THE MAN.

Many conservatives and even some traditional liberals have been gobsmacked by the tyrannical turn culture has taken. Riots, looting, arson, cancel culture, and men in women’s sports and locker rooms are awakening Americans to the propaganda their children have been ingesting in government mal-education camps.

The great unwashed, unwoke are prying open their sleep-encrusted eyes and seeing exactly what their decades of intellectual incuriosity and idolatrous worship of reputations, careers, and material stuff have facilitated in America. America’s children have been indoctrinated with false leftist dogma on sexuality, race, equity, oppression, and American history for decades, and the fruits of conservative inattention and cowardice are everywhere.

The questions are, do awakening Americans understand what it will take to preserve America? And do enough of them realize that the preservation or restoration of those principles upon which America was founded and that made America the freest, most prosperous nation in history will require courage and sacrifice—the kind of courage and sacrifice we admire in heroes but flee from in our own lives? I guess we’ll soon find out.