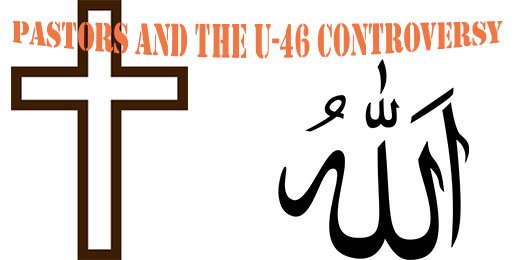 A new controversy has erupted in School District U-46, and this time it doesn’t involve compulsory co-ed locker rooms or offensive statements from board member Traci O’Neal Ellis. This time 18 local religious leaders have objected to school board member Jeanette Ward’s Facebook post about a controversial article on religion assigned in a sixth-grade class.

A teacher had her sixth-graders read an article by Australian history of religion professor and agnostic Philip Almond and then answer questions based on that reading. Here are some of the controversial statements from that article:

“Judaism, Christianity and Islam are three of the world’s major religions. While they have many differences, they all believe in the same God.

“Some of the prophets that Jews follow were Noah, Abraham and Moses. Christians follow these prophets too. They also think that Jesus was another prophet of the same God.”

“Jesus, Muhammad and the Hebrew prophets all described the same God.”

“The God of the Old Testament can be both good and evil.”

“Like the prophets of the Old Testament, Jesus predicted a day when God will punish humankind and will be merciless in doing so.”

“Muslims, Christians and Jews all worship the same complex God. But each religion believes that its books and teachings reveal the true nature of that God. This disagreement has shaped the course of history. The followers of each religion believe that only they will be saved by God. They see all others as damned. This way of seeing people, as damned by God and beyond saving, has led to violence and hatred.”

After reading the assignment, Ward posted the entire article by Almond along with these innocuous comments:

Do you know what your children are being taught: Muslims believe in the same God as Christians and Jews?

My 6th-grader came home with this assignment today. She was supposed to read the article and answer the questions. (She will not be completing this assignment). The full text of the article is below. Quiz questions are depicted in the pictures. This article is utterly incorrect and false on many levels. This is one of the many reasons I voted no on this curriculum resource.

In response to Ward’s Facebook comments, a statement signed by 18 religious leaders—mostly from apostate denominations—was read at Monday’s school board meeting (see names and affiliations below*). They began by mildly critiquing Almond’s article for its lack of “nuance” and “generosity”:

None of us saw our faith traditions represented in their fullness in the article as represented from the school’s curriculum.

[W]e feel that more important than the content of the article is the question of how we are to engage with inevitable differences of opinion, theology, and world view. Here, we strongly take exception to Ms. Ward’s approach… We believe that these instances represent a valuable opportunity to practice civil discourse and to express our differences with both respect and humility.

Seriously? Ward’s “approach” is more important to purported Christian pastors than a public school presenting resources that teach children that the God of the Old Testament is evil and that Allah and Jesus are the same?

Moreover, what specifically did Ward write that is uncivil, disrespectful, or prideful? Maybe these faith leaders could tell everyone exactly what the permissible ways to “engage with inevitable differences of opinion, theology, and world view” are.

One wonders why these religious leaders didn’t publicly chastise school board member Veronica Noland when she referred to opponents of co-ed locker rooms as “narrow-minded fear mongers.” And why didn’t they condemn school board member Traci O’Neal Ellis’ “approach” when she three times referred to Republicans as the equivalent of KKK’ers. Curiouser and curiouser.

This theologically imbalanced coterie of critics next claimed it’s the job of some unnamed persons to correct the misinformation provided to young middle schoolers by government employees:

[W]hen such articles and statements are presented to our children, we believe it is helpful to use these instances as opportunities to teach our children why we disagree with the information being presented and how to do so with respect and humility. Indeed, we believe teaching our children to identify, understand, and even challenge ideas with which they do not agree is helpful training for them as students, citizens, and people of faith.

The subject of their recommendation remains unclear. Who should teach children that the material presented at school is incorrect? Religious leaders? Parents? How can religious leaders or parents engage in the work of correcting misinformation if they don’t know that such misinformation was disseminated to their children?

This raises critical questions: Who selected this article? Did a department chair and curricula review committee read it? And why are teachers using resources that present arguable assumptions and errors as facts?

Continuing their criticism of Ward under the guise of offering their definition of proper leadership, the faith leaders inadvertently revealed their fealty to government employees as opposed to parents and other taxpayers:

This may be the most troubling part of their troubling statement. They failed to mention that the primary responsibility of school board members is to directly engage parents and other stakeholders—you know, the people who elected them and for whom they work.

How can Muslim, Jewish, or Christian parents have the kind of conversations with their children that this group of mostly “progressives” recommend unless a school board member or members engage directly with those parents to inform them of what was taught? Clearly the teacher didn’t do that.

From working for a decade in a public school, I learned that there is an unwritten principle that teachers, administrators, and board members cling to as if it were sacred. The rule is that if parents have a concern with resources, they should first express their concerns to teachers, and then if unsatisfied with the response, move up the food chain. In my humble opinion, that’s an arbitrary, socially constructed rule that parents need not honor.

Ironically, teachers, administrators, and board members who believe there’s no need to honor the practice of segregating boys from girls in restrooms and locker rooms think parents must honor the practice of keeping controversial resources on the down-low in order to avoid controversy. How “progressives” arrive at their ethical and moral imperatives is baffling.

Unfortunately, given the desire of “progressives” in government schools for absolute autonomy and their self-identification as “change agents,” controversy is both inevitable and necessary. To borrow from Rev. Dr. Martin Luther King Jr. in “Letter from Birmingham Jail”:

[W]e who engage in nonviolent direct action are not the creators of tension. We merely bring to the surface the hidden tension that is already alive. We bring it out in the open, where it can be seen and dealt with. Like a boil that can never be cured so long as it is covered up but must be opened with all its ugliness to the natural medicines of air and light, injustice must be exposed, with all the tension its exposure creates, to the light of human conscience and the air of national opinion before it can be cured.

There’s a lesson to be learned from this mess. It’s that “progressives” control schools in part because they act. Perhaps at the next board meeting, 20, 25, or 30 theologically orthodox Christians could make a statement about the problem of using taxpayer money to teach young children that Jesus and Allah are the same God or that the God of the Old Testament is evil. Surely there are a few pastors in the Elgin area who find such teaching objectionable. And surely  there are some who feel empathy for Jeanette Ward who stands in the gap for children when no other school board member does.