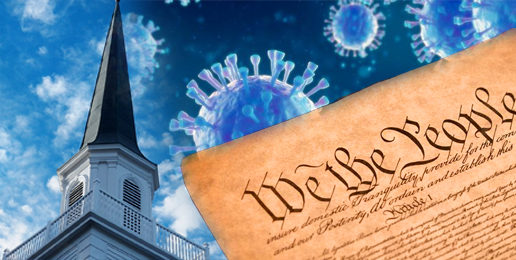 The Church, the Coronavirus and the Constitution
05.08.20
PRINT

The coronavirus crisis of 2020 has exposed the dark underbelly of the Chinese Communist Party (CCP) and the dangers of U.S. dependency on China. Not only was the CCP irresponsible in concealing the outbreak while allowing it to spread across the globe, but they also threatened to withhold pharmaceuticals so that America would be “plunged into the mighty sea of coronavirus.”

While that international confrontation is serious, the coronavirus has also exposed something else much closer to home and potentially as sinister. As our federal and state governments have reacted to the crisis with “stay-at-home” and “social distancing” directives, it’s revealed a disturbing willingness by some of our state and local authorities to impose orders on local churches that appear to violate their constitutional rights.

In Florida, a pastor was arrested and “charged with unlawful assembly and violation of a public health emergency order” after holding two Sunday services in violation of a safer-at-home order.

In Greenville, Mississippi, congregants were fined $500 each for attending drive-in services in the church parking lot where they kept their windows up and listened as the service was broadcast over the radio.

In Kansas City, MO, the plan for reopening the city included a requirement to record “names and contact information of attendees” during church services for possible “contact tracing” before it was walked back and made voluntary.

Here in Illinois, Governor J.B. Pritzker introduced a five-phase reopening plan that “gives guidance to schools, businesses, churches, and other religious centers.” Part of that guidance is that churches “will not be allowed to hold in-person services of more than 50 people until phase five, even if it takes more than a year to get to that position.”

Those are jarring examples of the government interfering in the life of the church. But none caught my attention like the one in Knox County, TN where local authorities took the dangerous step of decreeing what a church service could—and could not—include:

[T]he health department just announced that while churches may reopen on May 1, the Lord’s Supper is forbidden. The order was announced by Knox County Health Department Regional Hospital Coordinator Charity Menefee, who announced that Communion is not part of “core worship.”

The immediate question is, “Who is Charity Menefee and who gave her permission to determine what is or isn’t part of ‘core worship’ in the church?” It gets worse:

Not only that, but church attendees are also banned from physically embracing or shaking hands with one another. And singing, while not banned, “is discouraged as it is thought to be an activity that expels significantly more virus than talking.”

Got that? You may meet, but you may not sing, hug, shake hands or take communion. The order goes on to proscribe the use of hymnals, Bibles and offering plates and prohibits other activities that bring congregants together.

The civil authorities in Knox County are clearly operating outside their jurisdiction. Back in March, Douglas Wilson wrote about the nature and extension of civil government when it comes to the things of God:

In historic Presbyterian polity (all rise!), the civil magistrate had no authority in sacred things (in sacris), but he had definite authority surrounding sacred things (circa sacra). Put simply, the magistrate has no right to tell the church what to preach, how to pray, how to administer the sacraments, who to discipline, etc. That is not their assigned task. They need to stay in their lane.

But when it comes to questions of public safety (which is exactly what this is), preachers need to stay in their lane. It would be different if we were talking about a monastery with a bunch of recluse hermit monks, and the magistrate told them they couldn’t gather in their own chapel for prayers. That would be none of the magistrate’s business. But if great herds of Baptists head out to the Golden Corral after services, and they do this during the time of an epidemic, the magistrate has full authority and obligation to tell all of them “not so fast.” This is circa sacra.

There are so many areas where the church should be resisting statism, it would be shame to waste our powder on any issue where the state is acting well within its rights.

In Knox County, the state is most assuredly not “acting well within its rights.” While Charity Menefee rightly permits churches to reopen based on her authority “surrounding sacred things (circa sacra),” she violates the boundary separating church and state by assuming authority “in sacred things (in sacris).”

Menefee may not have done so with malice; in fact, she may have considered her directive magnanimous. But such a violation is still a violation—and a dangerous one at that because it is done in the name of “safety.”

But that’s not the right question. The question is, “Whose domain?” The practice of communion is not based on whether it is considered “safe” to do so by civil authorities. Follow the progression of that thinking and in ten years communion will be declared “unsafe” because it reinforces religious dogma that increases the risk of perceived threats to some minority group.

No, communion is first and foremost based on the authority of Jesus Himself.

For I received from the Lord what I also passed on to you: The Lord Jesus, on the night he was betrayed, took bread, and when he had given thanks, he broke it and said, “This is my body, which is for you; do this in remembrance of me.” In the same way, after supper he took the cup, saying, “This cup is the new covenant in my blood; do this, whenever you drink it, in remembrance of me.” For whenever you eat this bread and drink this cup, you proclaim the Lord’s death until he comes. (1 Cor. 11:23-26)

More important for this discussion, the freedom to practice communion without government interference is grounded in the First Amendment, which protects religious belief and expression. With emphasis added, it reads:

“Congress shall make no law respecting an establishment of religion, or prohibiting the free exercise thereof; or abridging the freedom of speech, or of the press; or the right of the people peaceably to assemble, and to petition the government for a redress of grievances.”

And in 1940, the U.S. Supreme Court ruled in Cantwell v. Connecticut that the Free Exercise Clause is enforceable against state and local governments. Menefee, then, is abusing her authority and violating her Christian citizens’ constitutional and God-ordained rights.

Fortunately, the Knox County Health Department removed the communion ban and other restrictions, instructing places of worship to “See State Guidance.” If such draconian restrictions return, the churches of Knox County must unite and issue a kind but firm rebuke to the local “magistrate,” making it clear that the encroachment on their civil and religious liberties will not go unchallenged.

The COVID-19 crisis won’t be the last time the local church faces off with civil authorities. While not every act of government interference with the church is illegal or unjustified, it is interference. All churches would be wise to think through how to respond. Even if the orders are legal and compliance is reasonable, such accommodation gives authorities a foot in the door. Be sure that agreeing to a modest request doesn’t lead to them barging all the way in.

This article is an expansion of a previous version published on DAVEOLSSON.COM.