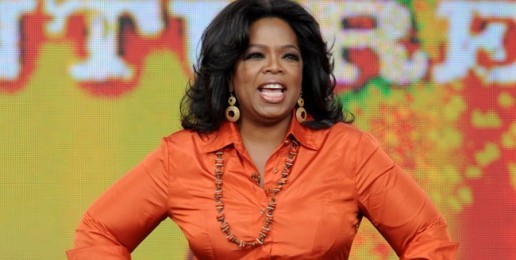 When most Americans hear the term “New Age” they might think of a little boutique that sells cotton caftans, CDs of sitar music, and multicolored assortments of crystals. It all seems to point to dubious fashion sense and outdated home decor, but nothing ominous, nothing harmful. Yet, in reality, the New Age movement has had a serious negative impact on many unsuspecting people.

People who have never set foot inside a New Age store, people who would laugh at the thought of pretty rocks containing healing powers — these same people are enthusiastically and blindly embracing dangerous New Age philosophies, all because of their admiration and devotion to the powerful and popular woman who is advancing these beliefs.

Who has become the High Priestess of the New Age Movement? Who is this woman who commands the respect of millions, whose stamp of approval can make or break a book, movie, or political candidate? She is the host of the highest rated talk show in television history, a magazine publisher, and an Academy Award nominated actress. She is Chicago’s very own, Oprah Winfrey.

Oprah definitely has influence. Her television talk show, The Oprah Winfrey Show, is seen weekly by an audience of 49 million viewers in the United States. Additionally, millions more worldwide watch Oprah in the 117 countries in which her show is broadcast. With apologies to Madison Avenue and E. F. Hutton, when Oprah talks, people listen. And what Oprah’s audience is hearing now is her ringing endorsement of Eckhart Tolle’s book, A New Earth: Awakening to Your Life’s Purpose.

Virtually everyone in America knows Oprah’s name, and most are familiar with her daily television program. But many are unaware of the depth of the spiritual lies she is promoting, and how many needy people are buying this false hope through Oprah’s celebrity. Please watch the following video to get a better idea of the lies she is selling her audience (you can also click this link):

While Oprah has professed to be a Christian, the principles in Tolle’s book are definitely not based on the teachings of Jesus Christ. In keeping with the subtitle of the book, the reader is encouraged to be “focused on the purpose of your Being here on earth.” Not surprisingly, nowhere does Tolle’s vision of one’s life purpose have anything in common with man’s purpose in relationship to God, certainly not as it is expressed in the Westminster Shorter Catechism. The very first question of the catechism asks: “What is the chief end of man?” and the answer is: “Man’s chief end is to glorify God, and to enjoy him forever.” Revelation 4:11 and 1 Peter 2:9 beautifully support the veracity of this historic church document. Nothing in Scripture even remotely supports Tolle’s contentions.

Tolle asserts that there is no death; that in fact man does not have a life, but he is life. Clearly this statement completely denies the truth of God’s Word found in John 14:6, as Jesus tells Thomas, “I am the way, and the truth, and the life; no one comes to the Father, but by me.” As Christians we know that “he who has the Son has life; he who does not have the Son of God does not have life.” 1 John 5:12

In light of Scriptural Truth, what kind of life can Tolle claim?

A New Earth does acknowledge the existence of God/god, but not God as any Christian would recognize Him. Tolle envisions his god, not as an entity in a particular place, but as “the essence, the intelligence, the animating life essence behind all life forms.” This essence does not appear to include a Son, for again, there is no mention of Jesus, the Son of God.

As a self-proclaimed Christian, how can Oprah countenance this false teaching? Even more troubling, how can she continue to promote such false teaching, knowing that millions of people look to her and are influenced by her words and viewpoints? Sadly, Oprah seems to have left the narrow path that leads to righteousness and, instead, she has started down the broad road that leads to destruction.

Oprah has publicly denied on her television program that Jesus, as the Son of God, is the only way to God (John 14:6). In her mind, there couldn’t possibly be just one way, but rather many diverse ways to God. In taking this position, she has rejected the authority of the Word of the Living God and embraced the distortions and lies of New Age charlatans and false teachers. Rather than Lord and Savior, Christ has become for Oprah “a stone that will make men stumble, a rock that will make them fall.” (1 Peter 8a) These New Age lies she promotes are deadly!

Oprah believes that God does not govern the affairs of mankind, nor does she believe in sin, the devil — but rather that “we are our own saviors” (directly contradicting Luke 9:23, which Jesus says; “If anyone would come after me, he must deny himself and take up his cross daily and follow me.” [emphsis added]). On her hit talk show, she has openly expressed her opposition to Jesus as being the true savior.

Earlier this year, her friend Marianne Williamson began teaching the 365 lessons from the New Age Bible, A Course in Miracles, on Oprah’s XM Satellite Radio. Page 147 of the Course Text teaches that we are “God”: “The recognition of God is the recognition of yourself.”

Oprah has also promoted the New Age book The Secret by Rhonda Byrne. Page 164 in The Secret states: “You are God in a physical body.”

And now, Oprah is launching an online course with metaphysical teacher Eckhart Tolle based on his book The New Earth: Awakening to Your Soul’s Purpose. In Tolle’s earlier book, The Power of Now, he teaches blasphemy — claiming that we are “God.”

While Oprah is free to believe whatever she wants, it is horrifying that so many souls are being led astray as they follow her lead. This incredibly influential woman could be a powerful ambassador for Christ, but instead, she is being used by Satan to peddle the “spiritual crack” of New Age teaching that leads to addiction, death, and eternal damnation.

As Christ’s return draws closer, we must stand firm in our faith, sure in what we believe and know to be true. Paul’s charge to Timothy in 2 Timothy 4:2-5 is a charge to Christ followers today as well:

“preach the word, be urgent in season and out of season, convince, rebuke, and exhort, be unfailing in patience and in teaching. For the time is coming when people will not endure sound teaching, but having itching ears they will accumulate for themselves teachers to suit their own likings, and will turn away from listening to the truth and wander into myths. As for you, always be steady, endure suffering, do the work of an evangelist, fulfill your ministry.”

Brothers and sisters in Christ, we are called to bear witness to the Truth of the Gospel in our circles of influence. Unlike Oprah, we may not be able to reach millions, but by the power and grace of God, we can reach out in obedience, confidence, and faith to the people who He places in our lives.

Was Biden’s Inaugural Address the Best Ever?