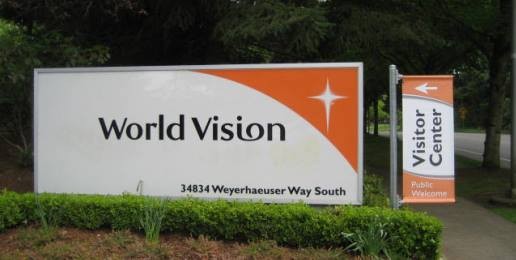 World Vision, in one of the most abrupt turnarounds in modern history, has done a complete about-face on its embrace of sodomy-based marriage.

Less than 48 hours after saying the organization was just fine hiring couples who were in same-sex “marriages,” the organization has repudiated that stance, acknowledging that the board “made a mistake,” and admitting they had failed “to be consistent with World Vision U.S.’s commitment to the traditional understanding of Biblical marriage.”

Says its president and board chairman, “We…humbly ask your forgiveness.”

Forgiveness is hereby granted, as Jesus instructed us to do.

WV’s heretical decision was also publicly opposed by Franklin Graham, the American Family Association, the Family Research Council, the Assemblies of God, and the Southern Baptist Convention. This united stand for truth and against sexual debauchery got World Vision’s attention and got their minds right.

However, there is a pronounced difference between forgiveness and trust. Trust, once shattered, cannot be rebuilt with just a letter of apology. Rebuilding trust and confidence requires change and action.

Luke 3:1-14 contains a thorough account of the ministry of John the Baptist. When individuals, tax collectors and soldiers came to John to receive baptism at his hands, a baptism of “repentance for the forgiveness of sins,” there was one question on everyone’s lips. This question is the hallmark of genuine, biblical repentance.

John’s answer was simple and direct: “Bring forth fruit in keeping with repentance.”

What does this mean for World Vision, if its leaders also ask the question, “What then shall we do?”

The minimum change that is in keeping with professed repentance is a sweeping change in leadership.

The larger issue here is that an environment has been fostered in the upper echelons of World Vision that made it possible for its leaders even to entertain an option that should have been absolutely unthinkable for anyone committed to God’s design for marriage. There is something diseased in the the boardroom of World Vision, and that diseased tissue must be cut out if this organization is once again to fulfill an evangelical mission.

President Richard Stearns must step down immediately. He is the leader of this organization, and he led it straight into a ditch. He must be replaced.

But that’s not enough. Every board member who voted for the original apostasy from the Word of God must likewise resign. Stearns made it clear in his original communication, announcing the embrace of homosexual marriage, that the World Vision board’s decision was not a unanimous one. Although the vote for embracing sin was overwhelming, there were board members who objected and voted to uphold biblical standards. They get to stay, the rest need to go. ASAP.

I anticipate that World Vision’s mettle will soon be tested. I predict that the Obama administration will now pull some or all of the $330 million it sends to World Vision, in order to punish them for being hatemongering homophobes.

Also, the state of Washington will likely sue them for violating its anti-Christian employment discrimination laws. If the attorney general will sue a florist in the Evergreen State for not embracing same-sex “marriage,” you can bet it won’t be long before he sets his sights on one of the largest Christian organizations in the world.

In other words, this is not the end of testing for World Vision but the beginning. They had better make sure they have leaders who are up to the task. Right now, they don’t.

This article was originally published at the RenewAmerica.com webiste.