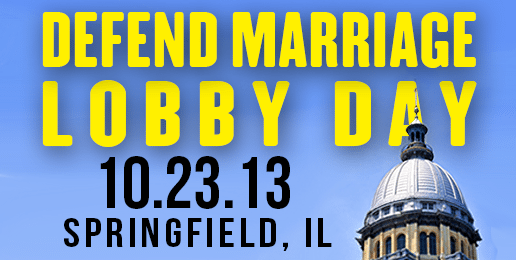 The second Defend Marriage Lobby Day of the year is less than two weeks away on Wednesday, October 23rd in Springfield.

Whether you’re able to come or not, we need you to contact your state legislator today.  If you are able to join us in Springfield, please let your legislators know that you’re coming and look forward to speaking with them about protecting marriage in Illinois.  If you’re unable to come, please send your legislator a message to protect marriage by clicking HERE.  Tell them that you wish you could attend and ask them to protect marriage.

Your attendance could very well lead to the defeat of same-sex “marriage” this year.  Our adversaries have only six days this fall to accomplish their radical goals: October 22-24 and November 5-7.  We are holding our Defend Marriage Lobby Day on the second day of the veto session.

While it would not be prudent to publicize all of the information about the vote count on SB 10, I can say that I am encouraged.  A large turnout on October 23rd will make a huge difference and could derail the opposition’s efforts.  (Find a bus ride HERE).

Your efforts are already making a difference.  Stephanie Trussell of WLS radio interviewed me on Sunday afternoon.  Stephanie saw a bumper sticker on a supporter’s car and googled “Defend Marriage Lobby Day.”  This led to the phone call, and an opportunity to get the word out to tens of thousands of listeners.  Then yesterday afternoon, Joe Walsh from WIND radio had me on his program to help us get the word out.

Thank you for your faithfulness and courage in standing for the truth. Keep getting the message out!

I am so excited to see how our grassroots efforts are making a difference.  You made it possible for us to sell out the IFI Fall Banquet that we held recently with Dr. Benjamin Carson.  Over 1,100 Illinoisans turned out to show their support for Christian values.  This event reminded me that, despite what media pundits want us to believe, protecting life, family, and freedom is a value shared by many, many citizens.

The Illinois Review published a comprehensive news story on the event.  They wrote:

Dr. Carson subtly compared what is happening in the White House to the teachings of Chicago native, Saul Alinsky, whose Rules for Radicals published in 1971 served as impassioned counsel to young radicals on how to effect constructive social change.  Never mentioned by name, but implied, was how the President had been schooled in Alinsky’s rules as a community activist in Chicago.  Prevalent among Alinsky’s rules being applied by the White House through its actions and policies: 1) if you push a negative hard enough it will gain traction and become a positive and 2) driving a wedge between people or groups of people will create class warfare and with it division and unrest.

The push for same-sex “marriage” is meant to divide people, and it is, of course, a negative.  Secular progressives know that if they push this negative hard enough it will eventually appear to be a positive.  They hate the God of Christianity and the Bible.

We must resist this scheme.  As Christians, it is our duty.  For the sake of our children and grandchildren, let’s make sure marriage revisionists go no further in advancing their effort to pervert the legal definition of marriage.

You can help right now by contacting your legislator:

Take ACTION:  Send an email or fax to your state representative today.  Ask him/her to stand firmly and courageously against SB 10, and warn him/her not to be persuaded by the emotionally manipulative and intellectually hollow rhetoric of the homosexual lobby.