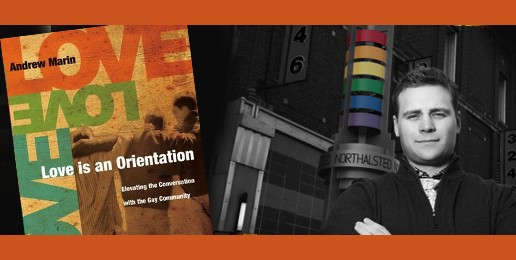 Andrew Marin, the controversial founder and president of the Marin Foundation, is speaking next week at Park Community Church in Chicago. This is surprising in that from its website Park Community appears to be a theologically orthodox church.

Marin promotes himself as a bridge-builder between the Christian community and the homosexual community and has written a book on the subject titled Love is an Orientation. It is not Marin’s desire to reach the unsaved that is troubling. We should all seek to bring the good news of Christ’s redemptive work to those who identify as homosexual. Rather, it is his approach and his theology that generate controversy and trouble many Christians.

One of the serious problems with Marin is that when asked directly about his biblical beliefs regarding homosexuality, he is troublingly evasive. In addition, his book has received a devastating critique from Dr. Robert A. Gagnon, Associate Professor of New Testament at Pittsburgh Theological Seminary and author of The Bible and Homosexual Practice: Texts and Hermeneutics.

If Park Community Church is a theologically orthodox church rather than a church that embraces “emergent” theology, they will likely be troubled by both Marin’s theology and obfuscation. Many Christians, including orthodox theologians, have serious concerns about Marin’s theology on a number of issues, most particularly homosexuality. Dr. Gagnon, arguably the preeminent biblical scholar on this topic, has written a two-part critique of Marin’s poor exegesis and his heretical theological positions, which every church that is considering working with Marin should read thoroughly:

Several years ago, it appeared that Marin was either trying to conceal his orthodox positions from his friends who identify as homosexual or that he was trying to conceal his unorthodox theological views from those who hold orthodox biblical views. Increasingly it appears that he is moving toward open heresy in line with “emergent” thinkers like Brian McClaren.

My intent is not to indict Marin personally but rather to warn theologically orthodox church leaders about his deceitful, dangerous, and heretical beliefs. Marin’s purported desire to build bridges relies on rejecting inconvenient Scripture and obfuscating such rejection when talking to orthodox Christians.

There is only one true theology regarding homosexuality. Orthodox theologians throughout the history of the church and today hold one singular view on what Scripture teaches on homosexuality. It wasn’t until the late 20th Century that any theologians could be found who reject the historical interpretation of Scripture on this issue.

Many Christians share a concern that false prophets are coming into our churches in sheep’s clothing. Christian leaders should substitute any other serious sexual sin for homosexuality and consider whether Mr. Marin’s theology and approach are biblically justified. We all come to Christ as sinners in need of God’s grace and mercy, but the church has no business affirming or even appearing to affirm believers in their embrace of sin as central to their identies. And no Christian has the right when directly asked what the Bible teaches about homosexuality to answer ambiguously or equivocally.

Some chastise critics of Marin’s work, like Dr. Gagnon, spuriously claiming that criticizing Marin’s work is tantamount to unbiblical judging. They and Marin himself claim that such criticism hurts Marin’s feelings. In so claiming, they seem to be doing what the secular culture does, which is conflate two distinct meanings of judgment. Dr. Gagnon has critiqued Marin’s exegesis, which is not only legitimate but essential. Mr. Marin has written a book and promotes his ideas all over the country on radio programs and in churches. The church must judge, that is to say, evaluate, the soundness and truth of his propositions. Marin’s feelings are far less important than biblical truth.

No one likes to be confronted with his or her error, but imagine if this strange definition of judgment were to be applied consistently. How would Christians be alerted to the false prophets or heresies in the church? Should Christian scholars be prohibited from critiquing the work of, for example, John Shelby Spong because doing so would constitute unbiblical judgment and hurt his feelings? Although Marin may find criticism of the ideas he publicly promotes to be unpleasant, such criticism cannot reasonably be called unloving. Determining what constitutes a loving act depends on first knowing what is true.

Marin should publicly answer these questions:

A writer for the Moody Church Venue blog wrote this following Marin’s 2010 visit: “[Andy] said, ‘We have to earn the right to communicate the truth first.’”

Marin is fond of citing this quote from Billy Graham: “It is the Holy Spirit’s job to convict, God’s job to judge, and it’s my job to love.” It is, indeed, the Holy Spirit’s job to convict, but it is the job of Christians, particularly Christian leaders, to teach what God’s Word says in its entirety, which includes teaching about what constitutes sinful behavior. Articulating what the Bible teaches about homosexuality no more constitutes unscriptural judging than does articulating what the Bible teaches about idolatry, blasphemy, or adultery. And sharing what God’s Word says about morality is a loving act.

When Marin spoke at the Venue, he referred to the fight for civil rights for blacks. I wonder, did Reverend Martin Luther King Jr. believe that Christians have to “earn the right” to communicate the truth about the sinfulness of racism? Did he ever say that before Christians condemn racism, racists must be converted? Why should the serious sin of homosexuality be treated so differently than other sins?

Everyone should be welcome in our churches, but welcoming sinners—which all of us are—must never involve affirming sin. God loves us despite our sins, and through the work of the Holy Spirit, God mercifully grants believers freedom from bondage to sin. It is the task of the church to teach the entirety of Scripture, and it is the privilege and duty of Christians to come alongside one another as we daily strive to deny ourselves as we live for Christ.

“And calling the crowd to him with his disciples, he said to them, ‘If anyone would come after me, let him deny himself and take up his cross and follow me. For whoever would save his life will lose it, but whoever loses his life for my sake and the gospel’s will save it’” (Mark 8: 34-35).

“Therefore do not let sin reign in your mortal body so that you obey its evil desires. Do not offer any part of yourself to sin as an instrument of wickedness, but rather offer yourselves to God as those who have been brought from death to life; and offer every part of yourself to him as an instrument of righteousness.  For sin shall no longer be your master, because you are not under the law, but under grace” (Rom. 6:12-14).

“And those who belong to Christ Jesus have crucified the flesh with its passions and desires” (Gal. 5:24).

For more on Marin, watch these two short videos: