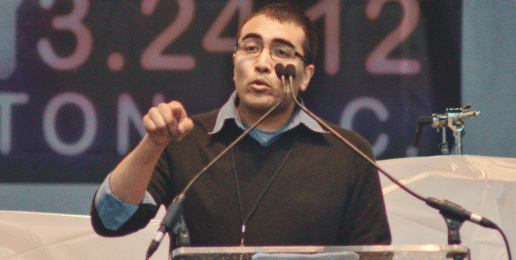 Today, an unusual number of atheists from around the country have used our Take Action system to voice their support to those schools that invited teen atheist Jessica Ahlquist to speak on constitutional issues. Since our typical audience is not composed of atheists, I suspected Hemant Mehta, the “Friendly Atheist,” and Neuqua Valley High School math teacher might be behind their efforts. Surprise, surprise, Mehta has posted yet another piece that misses, obscures, or twists the central points of my article.

In my article I quoted Maryam Judar from the Citizen Advocacy Center with whom I spoke yesterday and who brought Jessica Ahlquist to Illinois. I reported that Judar told me that since Jessica Ahlquist “is only 17,” she would not be able to speak articulately on constitutional issues.

According to Mehta, Judar claims that I misquoted her and that this is what she actually said to me:

I said that Jessica was a high school student and probably not able to discuss the complexities of First Amendment jurisprudence and that attorneys from the Center would be accompanying Jessica and also speaking to make sure that the law of the land was presented accurately. (emphasis added)

Mehta further argues that I “took Judar out of context.”

I did not take Judar out of context, except in the sense that I did not provide a transcript of the entirety of our 15-20 minute conversation.

I included the comments that Judar made that were relevant to what the administrators at York and Waubonsie Valley high schools have told parents about the content of Ahlquist’s presentation. They have told parents that she was invited to discuss constitutional issues. In fact, just today David Pruneau, superintendent of the district that includes York High School sent this  to parents:

The purpose for these kinds of events in the social studies department at York and other high schools is to provide students with experiences that promote civil discourse and critical thinking surrounding issues that are related to our social studies curriculum and in this case the complexities of the constitution of the United States….Our goal in bringing in Ms. Ahlquist (or any special speaker) for Constitution Day is…to serve as a catalyst to engage our students in discussions about constitutional interpretation that result in a deeper understanding of the complexities of the Constitution and our democracy.

While Judar admits that Ahlquist is “probably not able to discuss the complexities of First Amendment jurisprudence,” school administrators are telling the community that she was invited to promote critical thinking about and foster a deeper understanding of precisely those issues: “the complexities of the Constitution.”

Moreover, the quote that Judar gave Mehta, while substantially the same as the quote I cited, is not exactly what she said to me. For example, Judar absolutely did not say that Ahlquist is “probably” unable “to discuss the complexities of First Amendment jurisprudence.” There was no “probably” in her statement. Judar said that because Ahlquist is “only 17, she won’t be able” to discuss articulately constitutional issues. I have left a message with Judar regarding this discrepancy in our accounts. As of the writing of this article, she has not returned my call.

Judar is correct: In our conversation she did tell me that attorneys from the Citizen Advocacy Center would be speaking also (information, by the way, that was not shared with parents). The reason I omitted that comment as well as most of our conversation is that it is irrelevant to a discussion of Ahlquist’s presentation.

One last point about close reading. Some of Ahlquist’s fans who used our system failed to notice that my article did not call for the cancellation of her speaking engagement. In addition to the concerns mentioned in the prior paragraph, I suggested that next year these schools invite Joseph Morris or someone from the Thomas More Society to speak on the Constitution. I think this year’s presentation would have been better if they had invited two attorneys or law professors: one who holds a conservative judicial philosophy and one who holds a liberal judicial philosophy–both of whom would be able to discuss the complexities of First Amendment jurisprudence.