No, Juan Williams. ‘Parents’ Rights’ Is Not a Code for White Race Politics

Posted on November 3, 2021 by David E Smith
In his November 1 op-ed for The Hill, Fox News Analyst Juan Williams claimed that the “parents’ rights’ mantra in the Virginia gubernatorial elections is simply “a code for white race politics.” To the contrary, this really is about parents’ rights and about what is best for all children. To inject charges of white supremacy and racism is to miss the whole point of why so many parents are so upset. In all candor and with due respect, I would have expected better from Mr. Williams.
Posted in CRT/Racism/BLM, Marriage/Family/Culture, Media Watch | Tagged Black Lives Matter, Condoleezza Rice, Critical Race Theory, Fox News, Glenn Youngkin, Juan Williams, LGBTQ Agenda, Parental Rights, Terry McAuliffe, The Hill, white supremacy | Comments Off on No, Juan Williams. ‘Parents’ Rights’ Is Not a Code for White Race Politics

Banned From the Free Speech Cafe 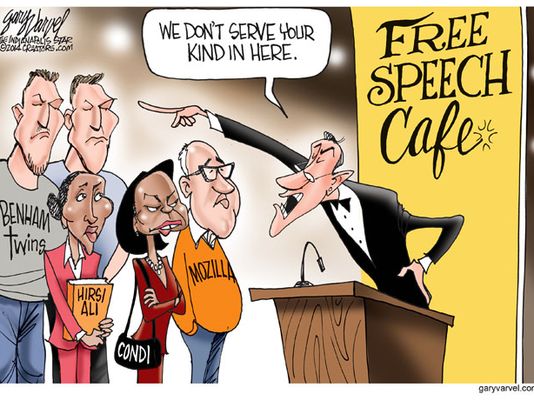 What is the state of tolerance of free speech these days?

Mozilla co-founder, Brendan Eich resigned under pressure over his support of the campaign to pass a constitutional amendment that outlawed same-sex “marriage” in 2008.

Condoleezza Rice declined the invitation to speak at Rutgers University Commencement after some antiwar students threw a hissy fit calling her a war criminal.

Brandeis University decided not to give Ayaan Hirsi Ali an honorary degree because she has written books critical of Islam’s treatment of women.