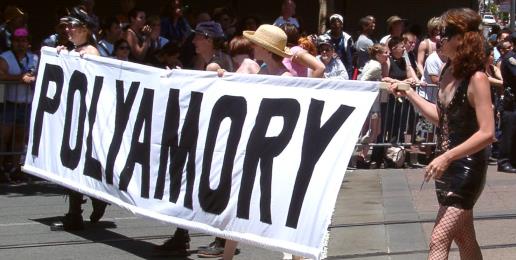 Marriage “progressives” ridiculed opponents of homosexual “marriage” when they suggested the next logical step would be the legalization of plural unions. The conservative argument is that if natural marriage is allowed to be redefined by jettisoning the central defining feature of sexual complementarity, the next feature to be jettisoned will be the criterion regarding numbers of partners. It’s been a little less than two weeks since Governor Patrick Quinn celebrated the signing of SB 10, which redefined marriage to allow two people of the same sex to “marry,” and the media are once again eager to give voice to yet another group seeking to further dismantle marriage: polyamorists.

Polyamory: Married & Dating is a cable television program that’s gotten a wink and a nod from ABC’s formerly serious program Nightline. Polyamory: Married & Dating follows the exploits of a Peter Pannish husband, Michael, and his foolish wife, Kamala Devi, a “sex coach” and “goddess,” who share their home and bed with assorted sexual partners. Oh, yes, the goddess and her husband are also raising their six-year-old son in the midst of this sexual anarchy. They defend their bed-hopping by repeating the Left’s favorite cliché about raising children: “It takes a village to raise a child.”

One of the goals of this couple is to “speed up acceptance” of polyamory, a cultural change which they believe is within ten years of realization.  A professional “psychologist/sex therapist” interviewed for this Nightline episode wants people to believe that “polyamory…is about creating love and lasting relationships.” As Michael’s and Kamala’s sexual partners move in and out of their bed, home, and son’s life,  it would seem that the “lasting” part of relationships is not even on their relationship radar. Unfortunately, people who have no grounding in the truth of Scripture will be enslaved to their fallen natures and will believe anything that allows them to indulge in sin.

Whether he realizes it or not, this child-man has been affected by Alfred Kinsey’s book Sexual Behavior in the Human Male. Kinsey, whose so-called “research”—much of it now-debunked—from the late 1940’s paved the way for the sexual revolution, found that most married men have and naturally want extramarital affairs, children are naturally sexual and should be allowed to engage in what comes natural, and that ten percent of the population is homosexual. This “research,” aided and abetted by the most infamous of child-men, Hugh Hefner, became the catalyst that eventually drove comprehensive sex ed curricula into many government-run schools (Illinois’ elected officials recently saw fit to mandate it for our children as well).

What people don’t know is that Kinsey’s pool of study participants was composed mostly of incarcerated men—not your average family man. His “research” on children involved using pedophiles who experimented on children as young as 5 months old. Some of the data were obtained by “Rex King,” an Arizona rapist of 800 children, and the Nazi pedophile, Von Balluseck. Dr. Judith Reisman has spent decades exposing Kinsey’s criminal junk science.

When a lie is repeated often enough, it is eventually accepted as true. Just ask the 95 Illinois lawmakers who bought this lie: “When two men love each other, they should have the same right to marry as a man and a woman.” Liberals who view the autonomous self as the center of the moral universe will not cease their attack on society’s most important cultural institution until nothing of it remains but the empty shell of the word “marriage.” We cannot remain silent as the Left promotes these lies.