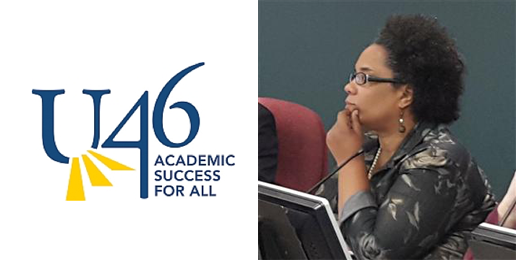 Traci O’Neal Ellis, far Left school board member in Illinois School District U-46, which was embroiled in a controversy last spring over the superintendent’s secret decision to sexually integrate restrooms and locker rooms, has joined the fracas over the Chicago Tribune’s biased reporting about State Representative Jeanne Ives. This is the twisted comment Ellis has offered on her school board member Facebook page, accompanied by a link to the Trib article:

The proposition by a legislator that there should be different tiers of students entitled to safe learning spaces and that the teachers who labor to provide them are anything less than stellar for affirming the humanity of students is deplorable. But considering the source, not unexpected.

It is utterly dishonest to state that Rep. Ives proposed “that there should be different tiers of students entitled to safe learning spaces and that the teachers who labor to provide them are…less than stellar.” That’s not merely a mischaracterization. It’s a lie. Considering it came from the woman who called the Republican National Convention the “Klanvention,” it’s not unexpected.

Oh, and by the way, I absolutely, unequivocally, stand by my comment about the RNC, because, you know, free speech and all. #Klanvention

How does someone get elected to a school board who calls Republicans–including, I assume, her Republican  constituents–Klansmen? How would Republican students feel if they knew that one of their school board members believes they’re Klansmen and Klanswomen? Would they feel “safe,” included, and affirmed? And I wonder if the Chicago Tribune considers such a pernicious statement newsworthy.

As I needed to do yesterday, I’ll try to bring some clarity—oh, and some honesty—to this discussion.

To my knowledge, Rep. Ives has never proposed or suggested that “there should be different tiers of students entitled to safe learning spaces.” If Rep. Ives did propose this, Ellis has an ethical obligation to provide conclusive, indisputable evidence for her claim. If she has no evidence, she owes Rep. Ives a public apology.

Because of the awkward structure of Ellis’ statement, I’m not entirely sure what she’s saying, but I assume she is referring to Rep. Ives’ belief—and the belief of millions of people around the country, including many feminists—that restrooms and locker rooms should correspond to objective, immutable biological sex. If I’m correct, Ellis’ distortion is indefensible.

As I wrote yesterday, the Trib article was not really about Ives. It was about my politically incorrect objection to teachers in public schools promulgating the “trans” ideology and Leftist assumptions about homosexuality, and my politically incorrect objection to teachers exposing other people’s children to obscene material. I said that teachers who expose other people’s children to egregiously obscene material are metaphorically equivalent to dirty old men lurking in alleyways to expose children to sordid things—except “progressive” teachers have no shame.

I didn’t propose that “there should be different tiers of students entitled to safe learning spaces.”

Since when did places where students tend to bodily functions, change their clothes, or shower become “learning spaces”? Of course, now they’re “learning spaces” because Leftist bullies employed by Big Brother at the public expense are using them to teach students that if they don’t want to change, shower, or go to the bathroom in close proximity to opposite-sex peers, they are ignorant, hateful, bigoted bullies.

What I have suggested is that schools make accommodations for those students who don’t want to share private spaces with students of their same sex, which Ellis evidently views as a “different tier.”

Ironically, “progressives” propose special accommodations for those students who don’t want to share private spaces with peers of the opposite sex. Wouldn’t that constitute a “different tier” in Ellis’ ideological world?

The Trib reporter who quoted from my article titled “Christians Must Exit Government Schools” failed to explain that my article wasn’t solely about gender-dysphoric students. It was also about the lack of integrity of teachers who expose other people’s children to obscene material. Teachers who do that are not “stellar” teachers.

Teachers who participate in the fiction that humans are “assigned” a gender at birth when in reality—you know, that place that comports with science—the objective sex of babies is identified at birth are not “stellar” teachers.

Teachers who comply with mandates to refer to gender-dysphoric students by opposite-sex pronouns are not “stellar” teachers. They’re ignorant or cowardly teachers.

Teachers who implicitly or explicitly teach students that those who object to sharing private spaces with opposite-sex persons are ignorant, hateful bigots are not “stellar.” They’re feckless and cruel teachers.

Teachers who implicitly or explicitly teach students that objective, immutable biological sex has no meaning relative to modesty or privacy are not “stellar” teachers. They’re foolish teachers.

Ellis makes the astounding claim that sex-segregated restrooms and locker rooms deny the “humanity” of gender-dysphoric students. Really? Does “affirming the humanity” of students or any other human really require denying the reality and meaning of their objective, immutable sex?

Many people believe that affirming the humanity of students requires affirming that which is true, and that affirming falsehoods undermines human flourishing and reveals a deeply misguided understanding of compassion.

Schools are a place where children need to be respected and protected. Just because a student (or more likely their parents) don’t agree with how others choose to live their lives doesn’t negate someone’s right to exist and access a high-quality education. Respect applies to all. Each student in U-46 is afforded their right to live in accordance with their beliefs and live their own truth. No teacher or parent is forcing another student to partake in anything they don’t believe it, but they darn sure better enforce a student’s right to exist and access their education without bullying, bigotry, or hate speech. It is not obscene to allow children to be who they are. It is obscene to persecute them and try to erase them.

Respect for children does not require affirmation, accommodation, or celebration of everything they feel, desire, believe, or do. Nor do “progressives” think it does. They certainly don’t respect everything conservative students feel, believe, or do. They don’t respect the feelings and beliefs of conservative students who think restrooms and locker rooms should continue to correspond to objective, immutable biological sex as opposed to subjective, internal feelings about one’s sex.

Nor do “progressives” believe that their refusal to maintain sex-segregated private spaces constitutes a denial of  conservative students’ right to exist or an “obscene” effort to “persecute” and “erase” them.

Ellis’ and Larson’s statements are the kind of irrational, incoherent, inconsistently applied demagoguery that infects government schools at all levels, making dialogue impossible and providing evidence for my claim that Christians must exit government schools.

IFI works diligently to serve the Christian community in Illinois with email alerts, video reports, pastors’ breakfasts, special forums, worldview conferences and cultural commentaries. This work is dependent solely on the support of readers like you.

If you appreciate the work and ministry of IFI, please consider
a tax-deductible donation to sustain our endeavors.

What A Great Opportunity!
b
a
x
r