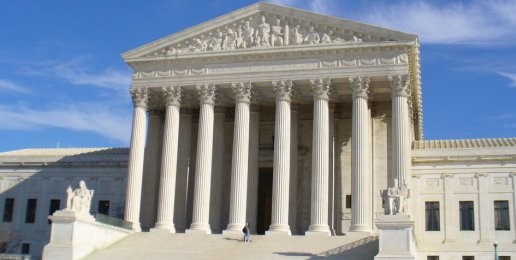 The Alliance Defense Fund (ADF) is calling on the U.S. Supreme Court to honor the religious liberties of American citizens on its own property. ADF has sent a letter to the High Court deploring a recent incident, in which police officers told a group of students that it was against the law for them to pray on the steps of the Supreme Court building.

Teacher Maureen Rigo took her American History class from Wickenburg Christian Academy in Arizona on an educational tour of the Supreme Court complex on May 5th. While there, they stood to the side at the bottom of the Supreme Court steps and prayed quietly in a conversational tone so as not to draw attention. Nonetheless, a police officer approached them and told them to stop praying immediately, and that their activities were against the law.

“Christians shouldn’t be silenced for exercising their religious beliefs through quiet prayer on public property,” says Nate Kellum, senior counsel for ADF. “The last place you’d expect this kind of obvious disregard for the First Amendment would be on the grounds of the U.S. Supreme Court itself.”

Kellum says that it is clear that Mrs. Rigo and her class were disciplined because of the content of their speech. “Evidently, people may engage in all sorts of conversational expression on Supreme Court grounds unless that expression happens to involve prayer. In so doing, Supreme Court police have targeted a particular viewpoint for censorship. They have singled out religious prayer as the only form of conversation to be silenced.”

Supreme Court officials defended their actions based on a federal law prohibiting parades and processions on Supreme Court premises.

In another case involving prayer, a North Carolina pastor was recently dismissed from his duties as an honorary chaplain for the North Carolina House of Representatives. Pastor Ron Baity of Berean Baptist Church in Winston-Salem was invited to offer invocations during one of the weeks of the legislative session. However, his invitation was withdrawn when he refused to remove the name of Jesus from his prayers. He was told by the House clerk, “We would prefer that you not use the name Jesus. We have some people here that can be offended.”

Therefore it is also contained in the Scripture,

Behold, I lay in Zion
A chief cornerstone, elect, precious,
And he who believes on Him will by no means be put to shame.

Therefore, to you who believe, He is precious; but to those who are disobedient,

The stone which the builders rejected
Has become the chief cornerstone,

A stone of stumbling
And a rock of offense. [Emphasis added]

They stumble, being disobedient to the word, to which they also were appointed.