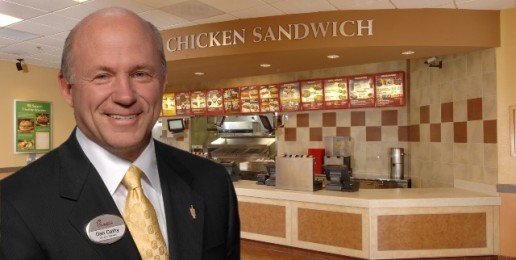 It is sadly true that when abnormal is called “normal,” normal becomes abnormal.  If it is determined that having three fingers is “normal,” then those of us with five will be “abnormal.”  So, Mayor Rahm Emanuel and Alderman Joe Moreno have broadcast to the world that the age tested and proven family value of intact one man-one woman families is not normal and not a Chicago value.  That which was declared by God to be His creation, and has been accepted as normal for as long as the human race has existed is no longer normal in Chicago.

What is normal in Chicago and apparently what our good Mayor would call “Chicago values,” are homosexual “marriages,” broken homes, violent streets, and a murder rate near the highest in the nation, possibly the world.  These “values” are being put in place here, not because of sound, logical and cogent argument, but because their proponents bully and even terrorize the public into silent submission.  Witness the vicious name-calling by the Mayor,  Moreno, and other liberals.  How many private citizens are up to facing THAT onslaught?

To his credit, Dan Cathy, President of Chic-fil-A,  doesn’t support these “Chicago values.”   For that reason, the Mayor and Alderman Moreno are doing all they can to “protect” the city from Mr. Cathy’s demonstrably successful family values.  It is pretty clear, by their strident and hateful attacks on Mr. Cathy, what Chicago values are to the these men and their political buddies:  Undermine intact families and subsequently destroy community integrity, perpetuate violence and consequently the slaughter of innocent children.  That  is what Chicago values have become under Daley, Rahm, Moreno, and friends.

Sure, no one would say that that is what they set out to do, but the policies they, and the liberal establishment have implemented over the last 50 years set the stage for such things.  A drunk, driving 80 down the street probably has no intention of killing anyone either, but that is what happens when you drive 80 miles an hour down city streets, regardless of your intentions.   Mr. Emmanuel and the Democratic Party don’t support the values of Mr. Cathy because traditional families take care of themselves and don’t need Democrats or Mr. Emmanuel.  We discipline our children, teach them to work, don’t let them join gangs or become dependent upon the state.  Of course the Mayor and Alderman loathe our family values! Our values don’t help them or their Party stay in power!  They apparently forget, of course, that it is our tax dollars that pay their salaries, support their welfare state, and their dependent voters.  The fact is that if Chicago were to adopt Mr. Cathy’s family values, the repeated slaughter of innocents would no longer be daily headlines.

Mayor Emmanuel and Alderman Moreno clearly have no qualms in opposing the values and principles that God has unequivocally defined in the Bible.  The Second Psalm addresses such men       “. . . the rulers take counsel together against the Lord and His Anointed saying, ‘let us break their bonds in pieces and cast away their cords from us.'”  God’s reaction is predictable: “He who sits in the heavens shall laugh; the Lord shall hold them in derision.  Then He shall speak to them in His wrath, and distress them in His deep displeasure.”

So, it is not at all surprising that the consequences God declares will come to those who reject Him plague this city.  Paul wrote in the Book of Galatians that God is characterized by “love, joy, peace,” etc.  Thus, with its leadership ejecting God, Chicago finds itself overwhelmed by hate, tragedy and violence.  “Whatsoever a man (nation) soweth, that shall (they) also reap.”

I don’t know, but are you okay with the thousands of shootings and hundreds of killings here each year?  Just wondering.

Maybe our good  Mayor and his friends can find an island somewhere where they can all live out their “family values” and suffer the consequences of their own bad choices, but I for one, am weary of witnessing  the suffering their failed leadership has brought the innocent of this city!

It is really, really time for change!