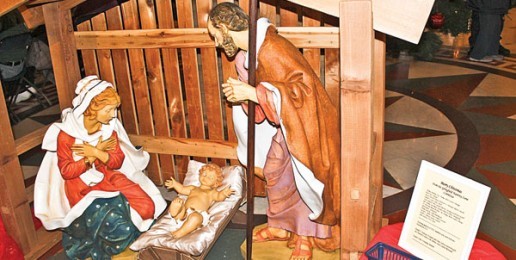 Not only was there no room for Baby Jesus in the inn, but for a few a days it appeared there was also no place in a public park.

In Arlington Heights, the Illinois Nativity Scene Committee attempted to place the familiar symbol of the holy family in the North School Park. However, after filling out the appropriate permit papers, the group’s request was denied by the local park district.

The Illinois Nativity Scene Committee, an independent organization, has made it an annual tradition to place Nativity Scenes in public places, most notably the Illinois State Capitol Rotunda and the Daley Plaza in Chicago.

When asked for a reason for the denial, the Arlington Heights Park District stated that they wished to stick to their traditional theme of children’s toys. The park currently has multiple seasonal decorations such as Frosty the Snowman, a lighted tree, Rudolph the Red Nose Reindeer, and even Hanukkah-themed dreidels.

All of the adornments are publicly funded. The Nativity Scene would be the only privately funded display in the park.

Jim Finnegan, the chairman of the INSC, told CBS news, “[the park is] missing the most important thing, the real soul of Christmas, and that’s the birth of Christ.”

On November 20th, Attorney Thomas Brejcha of the Thomas More Society sent a letter to the park district and village officials stating that the INSC’s objective is “a timely, genuine, and fully legitimate request to include a Nativity Scene, a constitutionally protected private expression of religious belief.” He further wrote that “The Nativity Scene would also fit thematically with the other displays, in the sense that all of them honor the holiday season, whose religious aspects cannot lawfully be discriminated against, in deference to its purely secular (sleigh, frosty, etc.) aspects.”

Brejcha also added that the “inclusion of dreidels, moreover, already injects the religious symbolism of Hanukkah among the displays, and we can think of no legally defensible reason why the Nativity Scene identified as privately sponsored and funded, should be barred.”

The Thomas More Society threatened a lawsuit if the Arlington Heights Park District refused to concede.

Last week, attorneys from the Thomas More Society and the park district were able to reach an agreement, and the Nativity Scene has been approved. Finnegan anticipates that the Nativity Scene will become an annual display in the park.

When asked about the whole situation, Finnegan told the Daily Herald, “We have a right to this so we need to stand up for our rights.”

On Saturday, December 15th, the group plans to unveil the nativity scene. A small dedication ceremony is planned to begin at 1 PM at the North School Park and is open to the public.

No Taxation without Moderation
b
a
x
r