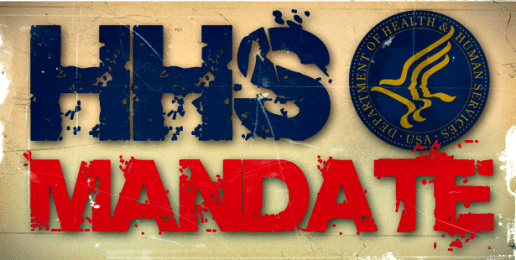 The Obama administration proposed a rule change Friday it says will appease the concerns religious organizations have about the abortion/contraceptive mandate, but legal groups who defend religious liberty called the proposal inadequate and said it fell far short of what is needed.

Religious groups had hoped the Department of Health and Human Services would announce that all religious organizations — universities, hospitals and charities — are exempt from the mandate, which requires employers to carry health insurance plans covering contraceptives and drugs that can cause chemical abortions. Churches, for example, are exempt from the mandate. Instead, HHS issued a rule it says allows for employees to obtain contraceptives and abortion-causing drugs without the religious employer taking part in the process. Religious liberty groups say employers still will be involved.

The proposal also does nothing to help businesses such as Bible publisher Tyndale House or Christian-owned Hobby Lobby or any other for-profit whose owners have religious objections to contraceptives and/or abortion-causing drugs.

“Having reviewed this proposed rule, we … have to say we’re extremely disappointed,” Kyle Duncan, general counsel of the Becket Fund for Religious Liberty, said in a conference call with reporters. Becket Fund has helped lead the legal charge against the mandate. More than 40 lawsuits have been filed against the mandate. Duncan called the proposal “radically inadequate.”

According to an HHS website, under the proposal, the religious employer “would not have to contract, arrange, pay or refer for any contraceptive coverage to which they object on religious grounds.” Employees “would receive contraceptive coverage through separate individual health insurance policies, without cost sharing or additional premiums.” The insurance company would be required to offer the drugs for free, HHS said.

Religious organizations that are self-insured would have to contact a third party administrator, which would “work with a health insurance issuer to provide separate, individual health insurance policies at no cost for participants.”

Religious liberty groups had multiple objections to the proposal. First, the groups said, religious organizations still will be required to carry an insurance plan that is tied to coverage of contraceptives and abortion-inducing drugs. Second, religious employers — particularly those who are self-insured — will be acting as “conduits” with health providers to ensure their employees can obtain the drugs. Third, it’s unclear who is paying for the “free drugs.” As some religious commentators were suggesting: Will insurance companies simply raise rates — and thereby pass the cost for the abortion-causing drugs on to the religious organization?

Duncan said religious organizations are “going to have to carefully consider whether this accommodation really doesn’t change the moral landscape at all. It’s going to be up to them to make that determination. We believe they’re going to have some serious concerns about remaining unacceptably involved in the provision of these drugs and devices.”

The HHS announcement did nothing to change the coverage by for-profits. Hobby Lobby, the arts and crafts store whose Christian owners say they will not follow the mandate, apparently will face fines of more than $1 million each day if a federal court does not step in. Its owners always have made their faith a central part of their business. Their stores play Christian instrumental music and are closed on Sundays. Hobby Lobby contributes to Christian organizations and runs full-page ads in newspapers during the Easter and Christmas seasons with Gospel-centered messages.

The good news for Christian for-profits is they are winning in court, having seen 10 wins and only four losses. Hobby Lobby, though, is one of those losses. The issue likely is headed to the U.S. Supreme Court.

“The administration fails to understand,” said Gene Rudd of the Christian Medical Association, “that many employers and individual Americans, regardless of a religious label or not, maintain strong conscience objections to participating in any way, shape or form in a plan that promotes pills that the FDA says can cause the demise of a living human embryo — a developing baby in her earliest stage.”

Covered under the mandate are emergency contraceptives such as Plan B and ella that can kill an embryo after fertilization and even after implantation. Pro-lifers consider that action a chemical abortion.

The mandate was announced by HHS in August 2011 as part of the health care law championed by President Obama. Although the Supreme Court upheld the health care law last June, the justices’ ruling did not deal with the religious liberty issues surrounding the abortion/contraceptive mandate. That means the nation’s highest court could yet strike down what has been for religious groups and some business owners the most controversial part of the law.

Michael Foust is associate editor of Baptist Press. Get Baptist Press headlines and breaking news on Twitter (@BaptistPress), Facebook (Facebook.com/BaptistPress ) and in your email (baptistpress.com/SubscribeBP.asp).