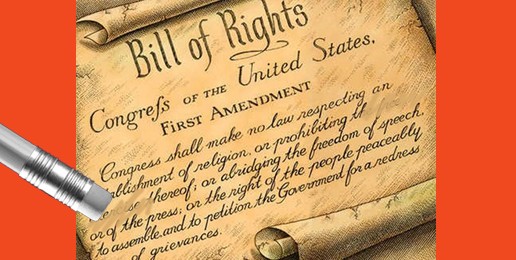 In their efforts to redefine marriage, most homosexual activists become apoplectic at the suggestion that there is more to their efforts than just their  purported goal of achieving “marriage equality.” They dismiss the comments of homosexuals like lesbian journalist Masha Gessen who states that the institution of marriage “should not exist,” and that homosexual activists are “lying about what we are going to do with marriage when we get there,” as the extreme views of just a few radicals.

What cannot be dismissed, however, is that time and again homosexual activists have proven through their actions that the redefinition of marriage isn’t their only goal, but rather government enforced acceptance and celebration of the LGBT lifestyle. Here are just a few portents that shouldn’t be ignored:

There are many more cases like these, and many more will be coming down the litigation pike. In each of these cases, homosexual activists prove that what they really want goes far beyond “marriage equality” or “tolerance.” And they clearly demonstrate their lack of tolerance for any dissenting opinions.

In each of these cases, the homosexuals involved could simply have sought the services of a vendor who held no moral objections to same-sex relationships. Instead, they chose to use the heavy hand of government to coerce and punish those who do not share their beliefs.

Finally, consider the current bill to redefine marriage in Illinois (SB 10). This proposal has been labeled by law professors on both sides of the marriage issue the “worst in the nation” when it comes to protecting religious liberty and freedom of conscience. In a letter to state representatives, the Thomas More Society warns that if SB 10 passes, Illinois’ religiously affiliated hospitals, schools, and organizations like the Knights of Columbus as well as businessmen and women of faith will face costly lawsuits not dissimilar to the ones listed above.

If the concern of homosexual activists were simply about gaining “marriage equality” as they claim, why would proponents oppose legal protections for all people of faith? Why wouldn’t proponents add specific language to SB 10 to protect the free exercise of religious belief and an individual’s right of conscience, which would protect their right to decline to provide goods, services, and accommodations to those seeking government recognition of same-sex unions as “marriage”?

Because this isn’t merely about “marriage equality.” It’s about quashing every semblance of opposition to the LGBT political agenda through every governmental entity at their disposal: Congress, state legislatures, Presidential Executive Orders, or the judicial or quasi-judicial branches of government. It has nothing to do with marriage “rights” and everything to do with religious bigotry.

While it is important that we stand up to defend the institution of marriage, it is vital that we understand that the agenda is far more insidious and far-reaching than many realize. Once you understand how far they want to take this agenda, it is unconscionable to sit on the sidelines.

[Editor’s note:  If you would like to read more about how religious liberties are eroding in the wake of the LGBT political agenda, I encourage you to read this article from World Magazine about what is happening in Canada and how it may be a precursor for the United States.]