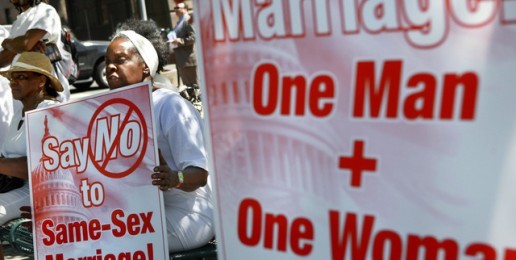 While poorly decided U.S. Supreme Court cases are a dime a dozen, prior to Wednesday, two stood alone as the most wretched and constitutionally groundless in American History. First was the 1857 Dred Scott decision. Among other things, it robbed African-Americans of both their U.S. citizenship and their dignity.

Next came the 1973 ruling in Roe v. Wade. It has robbed over 55 million U.S. citizens of their very lives. For the first time in American history, the high court imagined a phantom constitutional right for women to dismember alive their own pre-born children.

Both of these cases are blights on American history. Fortunately, the first, Dred Scott, has been officially relegated to the dustbin of judicial disgrace, while the second, Roe v. Wade, continues to be used as justification for mass genocide. With each passing day, the bodies of the innocents pile-up like God’s chosen at Auschwitz.

Tragically, this past week we hit the unholy trifecta. A third precedential abomination was added to the mix. On Wednesday, the high court handed down two cases concerning the pagan left’s abjectly bizarre efforts to redefine the age-old and immutable institution of marriage (Hollingsworth v. Perry and U.S. v. Windsor). The more egregious of the two opinions, Windsor, presumes to invalidate Section 3 of the 1996 Defense of Marriage Act (DOMA), granting limited federal recognition to sin-centric and sodomy-based same-sex “marriage.”

Not only did this 5-4 decision effectively deconstruct the institution of legitimate marriage, removing all ethical and legal justification for barring similar such perverse “marriage” amalgamations as “gay marriage” (i.e., multi-party or incestuous nuptials) – it also laid the groundwork to force the 37 “marriage reality” states to join the remaining 13 in a corporate “marriage equality” delusion. This is not just judicial activism; its judicial tyranny – a potentially fatal self-inflicted wound to the high court’s yet waning legitimacy.

Still, while much will be written about Windsor from a legal standpoint, for now, let’s focus on another of the decision’s inevitable outcomes: Anti-Christian persecution. If, through judicial fiat, “gay marriage” ultimately becomes the law of the land, tens-of-millions of Christians (as well as Jews and Muslims) will be forced to choose between obedience to God and obedience to Caesar – between fidelity to conscience and government oppression.

Millions of us have already made that choice.

As we’ve now seen in states that fancy mock “gay marriage,” for instance, the only way to force Christian individuals and business owners – such as bakers, photographers, innkeepers and florists – to lend their talents to sin-centered “gay weddings” is through the power of the police state. This amounts to a systemic, immoral and profoundly unconstitutional trampling of the First Amendment.

What follows will be a deviant-sexual-behavior-based “LGBT” suspect minority class with all the associated trimmings. In the eyes of government, Bible-believing Christians will be treated as modern-day racists. Any outward expression of the Judeo-Christian sexual ethic will be trumped by newfangled “gay rights” and deemed verboten. For all intents and purposes, Christianity will be criminalized. This is not mere speculation. It’s been the plan all along.

Case in point: Chai Feldblum, President Obama’s EEOC commissioner – a lesbian activist who supports “plural marriage” – has promised as much. She admits that progressives “want to revolutionize societal norms” and believes that “gay sex is a moral good.” She calls the clash between religious liberty and “sexual liberty” a “zero-sum game,” meaning someone wins and someone loses. Guess who loses? Feldblum has “a hard time coming up with any case in which religious liberty should win.”

Even so, Wednesday, after the offending high court opinions were announced, I was reminded by a close friend and fellow Christian attorney that, “God is in control, and that has to be more than a slogan at times like this.”

Since, no doubt, the Obama NSA has already read our entire email exchange, I thought I’d go ahead and share excerpts with you as well. My colleague’s insights are profound. I found them encouraging. I hope you do, too.

“Amen,” I replied. “At the risk of sounding a bit apocalyptic, I’m fully convinced that this is part of His divine plan – perhaps to begin separating the wheat from the chaff. We have arrived: ‘As it was in the days of Noah, so it will be at the coming of the Son of Man.’ Matthew 24:37.”

“I agree with you,” he responded, “and that conviction makes all this much easier. What depresses me is the astonishing disconnect and irrationality that sin so easily produces, and how quickly it spreads; we are truly sheep and fully as stupid without a Good Shepherd.

“In my 35 years as a Christian, I never seriously believed we might end up in prison for our faith – except, perhaps, for something like a pro-life demonstration. This is the first time it seriously occurs to me that the trajectory of the nation is such that it is possible in five to 10 years. Oddly, this thought does not discourage or scare me; in fact, it’s almost a joyful thought that we might have the privilege to suffer for our faith. Rejoice greatly when men revile and persecute you for my name’s sake, for your reward is great in Heaven (a rough paraphrase of Matthew 5:12).

“It may be that the truly toughest tests we had were earlier in our lives,” he continued, “before we got fully engaged and in the movement. … Now we’re part of networks with support from like-minded people, and we’re largely insulated from what the opposition can do to us. The real heroes are our clients who speak up at the risk of losing their livelihood, getting thrown out of school, or getting death threats from the tolerance crowd. I feel now like my faith costs me less than when I was in private practice before hostile judges and antagonistic media hit-men.”

“You nailed it,” I replied. “What an honor that our Creator chose us before time began to be part of a Gideon’s army of truth-tellers and defenders of the faithful. It’s an amazing time to be alive. But, as you mentioned, although we’re on the front lines, we also have tremendous support. It’s quite liberating to be written-off by the world and, consequently, free to speak and behave in a way that reflects the reality that we couldn’t give a rat’s behind what the world thinks of us. Those we represent rarely have that luxury.

“Whether it’s one day or hundreds of years,” I continued, “I really believe we are living in the last days (in the total scheme of time and space). I just hope that when and if the time comes, the Holy Spirit gives me the strength of character to not only refuse to deny His Truth, but to be like our martyred brothers and sisters who walked up and kissed the stake before being burned alive on it.

“Anyway, that’s enough trying to cheer each other up for now,” I joked. “Keep on keepin’ on, my friend.”

Do I really believe American Christians will be burned at the stake over counterfeit “gay marriage”? No. Do I believe Christians will face real persecution, such as loss of livelihood, civil penalties, physical abuse or even jail? Absolutely.

Still, come what may, we Christ followers must always remember this admonition from Romans 12:12: “Be joyful in hope, patient in affliction, [and] faithful in prayer.”

In other words, mock “marriage” or not: Keep on keepin’ on, my friend.

(Go to MarriageSolidarity.com to pledge no surrender on marriage).