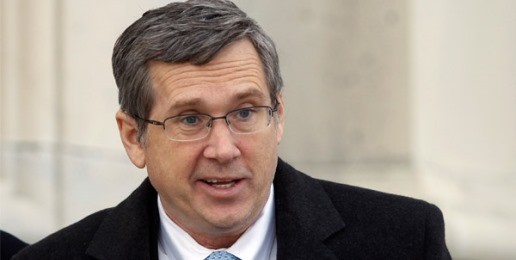 Last week, U.S. Senator Mark Kirk (R-IL) confirmed my reasons for vehemently opposing his election.  His obamaniacal act of hubris last week also reminded me of the emails I received chastising me for what some perceived as my wrongheaded, doctrinaire naïveté in opposing Kirk’s election.

Last Friday, Kirk, in league with homosexual activists, abruptly cancelled access to a U.S. Senate meeting room that had been reserved months ago by the Rockford-based Howard Center for Family, Religion, and Society.  According to Sen. Kirk’s press secretary, Kirk cancelled the meeting because he “will not host groups that advance a hateful agenda.” And what is the “hateful agenda”?  The question posed on the meeting’s invitation was” [W]hat might conservative Americans learn from Russia, Australia, and other nations about rebuilding a pro-family policy?”

The discussion panelists were Austin Ruse, President of the Catholic Family and Human Rights Institute; Allan Carlson, former professor of history at Hillsdale College in Hillsdale, Michigan and president of the Howard Center;  Stephen Mosher, president of the Population Research Institute and an advocate for human rights in China; and Dr. Janice Shaw Crouse, Senior Fellow at The Beverly LaHaye Institute, the think tank of Concerned Women for America.

If Kirk considers these scholars hate-promoters, then logically he must call all orthodox Christian theologians hate-promoters for every contemporary orthodox theologian and every theologian in the history of Christendom has held the same views on the nature of marriage and the nature and morality of homosexuality as these panel participants.

If Kirk’s Democratic opponent in the U.S. Senate race had won, the Republican Party would be working feverishly to find a candidate to challenge him. Of course, with the Illinois GOP polluted by the corruption and ignorance that plagues much of the Democratic Party, who knows what dubious character they may have trotted out and insisted Republicans support. The designation “Republican” is no guarantee of integrity, wisdom, or humility.

But with Kirk ensconced in the corridors of the U.S. Senate, (where he works tenaciously for every pro-homosexual bill including Illinois’ recent same-sex “marriage” bill), the Illinois GOP has little motivation to dethrone him. They couldn’t care less if he abuses his position to normalize sexual deviance while trampling the conscience rights of untold numbers of people. 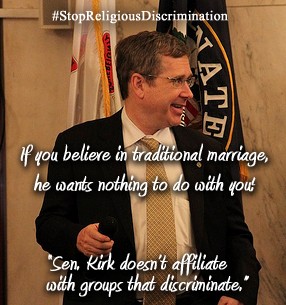 “Moderate” Republicans (hereafter referred to as immoderates) caterwaul that social conservatives are exclusive, narrow-minded, parochial voters who just don’t get the bigger picture. That bigger picture is centrally shaped, in the exclusive, narrow-minded, parochial view of immoderates, by “electability” and fiscal issues. Their big tent is really not so much big as it is blue-tinged. They don’t really want social conservatives to expand their scope of interests beyond the issues of prenatal rights, marriage, religious liberty, and the post-natal rights of children. They want social conservatives to abandon wholly those issues.

Conservatives, move to the back of the big immoderate purple circus tent and shut your flapping jaws about those irrelevant issues pertaining to sexuality, the First Amendment, and children’s rights—none of which (in the view of immoderates) have any substantive bearing on the public good.

In the meantime, the immoderates unctuously ooze that social conservatives should just let the big daddies who know best—people like Mark Kirk who solicited support from the baby-killing  industry when running for the U.S.  Senate—to run the country for them.

Sen. Kirk thinks that it’s hateful to believe that marriage is inherently sexually complementary, but not hateful to kill the unborn. To Kirk, cross-dressing and perverse sexual acts are moral goods and fighting for the rights of children to survive the womb and be raised by a mother and father are moral evils. What kind of man thinks like this? C.S. Lewis calls men like this “men without chests,” and Isaiah warns, “Woe to those who call evil good and good evil, who put darkness for light and light for darkness.”

Don’t you fret, oh ye of little conservative minds, your time will come—the immoderates hiss.  Just wait until men without chests have solved our debt problem and then they’ll end the forfeit—I mean, truce—on the “social issues.” Yessiree, once we get out of this $17 trillion debt, our lawmakers will work to restore the proper marriage laws, religious liberty, and children’s rights that they’re allowing to be trampled or, in the case of Kirk, actively and jubilantly trampling.

But does anyone really believe that in the future conservatives will be able to restore marriage laws or repeal the Employment Non-Discrimination Act (ENDA) so that business owners will have the right to refuse to hire cross-dressers if men like Senators Mark Kirk and Rob Portman (R-OH) have been in Washington D.C. for decades using their power and friendships to shape the votes and views of colleagues?

Take ACTION: Please click HERE to contact Senator Kirk to express your opposition to his endorsement of homosexual “marriage,” his engagement in religious discrimination, and his subordination of the wishes of Illinois conservatives to the desires of homosexual activists.  You can also call his Washington D.C. office at (202) 224-2854.

As you know, the Illinois Family Institute is completely dependent on the voluntary contributions of individuals just like you.  Without you, we would be unable to fight the radical agenda being pushed by the godless Left.  Please consider chipping in $5 or $10 to help us promote family-friendly laws and policies.

The Overturning of Roe v. Wade and the Possibility of Cultural Change
b
a
x
r