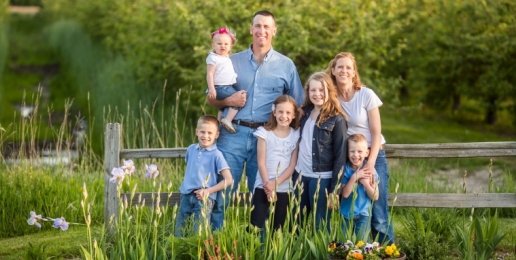 The Left, drifting further and further into unreality, insists on denying that conservative Christians are being persecuted in America despite unequivocal evidence to the contrary. But I guess if they’re able to deny that persons with congenital penises are male, anything is possible.

Leftists, so busy celebrating the emperor’s new gown, may not have noticed that a Catholic family smack dab in the heartland of America is being persecuted for their belief that marriage has a nature that the state cannot change.

Steven and Bridget Tennes, both military veterans and Catholic parents of five children who own the Country Mill Orchard and Cider Mill in Charlotte, Michigan, are suing the city of East Lansing, Michigan for banning them from selling fruit at a farmers’ market where they have had a booth for the past six years. The city banned Country Mill because the owners will not rent out their cider mill for same-sex “weddings.”

The Tennes’ do sell their products to homosexuals and employ homosexuals, so Leftists cannot argue that they refuse to serve homosexuals or that their refusal to host faux-weddings grows out of hatred for homosexuals.

The issue is not whether business owners should be able to discriminate—that is, make distinctions—when it comes to the type of events they will serve or products they will make. All businesses do that.

The controversy started in 2014 when lesbian Caitlyn (Martin) Ortis inquired about having her same-sex faux-wedding at Country Mill and was turned down by Steve Tennes. Ortis then took to social media posting this, “‘When choosing a cider mill to go to, please remember that The Country Mill… refused to let Liane and I have our wedding there because of how we identify. Please support a local cider mill that does not discriminate against LGBTQIA+ folks or any folks for that matter,’”

My suggestion to East Lansingans (East Lansingians?) is to boycott this farmers’ market, which discriminates based on religion, a clear violation of the First Amendment of the Constitution.

Despite homosexual New York Times writer Frank Bruni’s claim that people of faith must restrict their free exercise of religion to “pews, homes and hearts,” the Constitution guarantees the right to freely exercise one’s religion—no qualifications, no geographic limitations. That’s why Dr. Martin Luther King Jr. felt free to urge moderate white Christians to take their sorry arses off their pews and into the public square to fight for just laws. And so there’s no confusion about what constitutes a just law, Dr. King told us in “Letter from Birmingham Jail”: “A just law is a man made code that squares with the moral law or the law of God.”

The Tennes family rightly believes that marriage has an immutable, intrinsic nature that no tinkering of man can change. In other words, marriage is something. It has an ontology. Man does not create marriage out of whole cloth. Societies recognize and regulate a specific type of relationship that exists and we call “marriage.” Marriage is the union of one man and one woman. No law can change that reality. The law can no more change what marriage is than a new birth certificate can change the sex of Bruce Jenner.

The Bible is clear that marriage is the union of one man and one woman. Biblically illiterate Leftists often claim that since Christians eat shellfish or wear clothing of mixed fabrics—both proscribed in the Old Testament—they should have no problem serving homosexual anti-weddings. These biblically illiterate Leftists don’t understand that the Old Testament contains three types of codes or laws, two types of which (i.e., holiness codes and civil codes) do not apply since Jesus appeared on the historical scene. The universal moral code, however, appertains still.

Theologically orthodox Christians understand and value marriage as a public institution that affects the public good in profound ways, but it is not the word “marriage” that magically confers public meaning and value on a relationship. It is the nature of an intrinsically marital union that renders it valuable as a public good.

For Christians, marriage is a picture of Christ and his church. Christ is the bridegroom and his bride is the church. The marital partners are of different natures. To suggest that marriage can be composed of two partners of the same sex means there is no difference in nature or role between Christ and his church. This constitutes a heresy of the first order. For the government  to command that Christians serve in any way a ceremony that embodies such an abominable heresy is profoundly troubling and should not be tolerated.

The Left understands the political importance of incrementalism. They chip away at truth like a sculptor at a piece of marble. And while they chip away bit by bit, creating their ugly post-modern travesties, cowardly conservatives rationalize their capitulation by saying, “It’s just a small change.”

Well, look where conservative capitulation to incremental change has landed us with regard to all matters “trans.” We’re on the cusp of a sexual revolution unheard of in the history of man: the planned obsolescence of the public recognition and accommodation of sex differences everywhere.

“Progressives” and cowardly conservatives should be ashamed to hear these words from Steve Tennes:

My wife Bridget and I volunteered to serve our country in the military to protect freedom, and that is why we feel we have to fight for freedom now, whether it’s Muslims’, Jews’, or Christians’ right to believe and live out those beliefs.

So, fellow conservatives, IFI pleads again for you to find those dusty spines in the attic where you’ve stored them with other unused cultural artifacts. Or if you’ve been walking around all Gumby-like with bendy spines, stiffen them up. Take some calcium supplements.  Then do what I’ve done: Cook up some thick skin in your basement laboratory to slip over your spanking new spines and DO SOMETHING!

Did I miss anything?

Pride Really is Nothing to Boast About
b
a
x
r