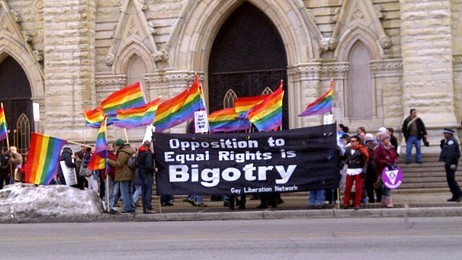 Homosexual activists emboldened by Illinois’ civil union law are attempting to force Christian agencies that receive state funds to license foster families either to place children with homosexuals or lose state funding, which would jeopardize the placements of thousands of children.

The Chicago Tribune reports that Illinois Attorney General Lisa Madigan, Gov. Pat Quinn and the Department of Children and Family Services are investigating these Christian foster care agencies for discrimination because of their religiously based decisions not to place children in the homes of homosexual partners.

If homosexuals were centrally concerned for the welfare of children, they would leave religious agencies to act according to the dictates of their faith traditions. But as usual the ignoble desire of homosexuals to compel the entirety of society to affirm their attractions, volitional acts, and moral and political beliefs takes precedence over all else. It supersedes the rights of parents, speech rights, religious liberty, and even the welfare of children. It’s astonishing to witness such monumental narcissism and selfishness in the service of normalizing perversion. Of course, the real motivations are speciously papered over with “civil rights” rhetoric to deceive the gullible.

They justify this effort by claiming that the refusal to place children in homes of homosexuals violates laws that prohibit discrimination based on “sexual orientation.” This points to the disastrous cultural consequences that will continue to accrue because homosexual activists and their ideological allies were allowed to add the term “sexual orientation” to anti-discrimination laws and policies. Of course, they were aided by the ignorance, cowardice, and silence of conservatives who failed to fight vigorously against such a feckless inclusion.

Individuals and organizations have a moral right to discriminate among volitional behaviors. That is to say, they have an inalienable right to make judgments about what constitutes moral behavior. Homosexuality is not equivalent to race, and disapproval of homosexuality is not equivalent to racism. Homosexuality is a condition centrally defined by subjective feelings and volitional acts, and as such, should never be included in policy or law with conditions that are objective and non-behavioral.

What are the essential criteria for evaluating the suitability of families seeking to foster or adopt children? They must have the financial means to support them and be able to provide a clean, nurturing environment. If it is a couple, they must demonstrate that they have a stable, committed relationship. But is that all? If so, then we as a society should cheerfully turn over suffering children to the care of loving, committed, stable incestuous couples who are able to provide a safe, nurturing environment.

And we should cheerfully and comfortably relinquish suffering children to the care of loving, stable, committed polyamorous families who are able to provide a safe, nurturing, environment.

And what about lesbian sisters who demonstrate similar relational qualities and can provide the same material security that a heterosexual married couple demonstrates and provides?

Love, commitment, stability, safety, and support are, indeed, essential factors when evaluating the appropriateness of a family seeking to foster or adopt, but so too is the moral nature of the relationship of the family. Those who recoil at the idea of incestuous couples or polyamorous partners fostering or adopting do so out of the same kind of moral evaluation of the nature of incest and polyamory as others do out of a moral evaluation of homosexuality. Those who would prohibit loving, stable incestuous couples or polyamorous partners from fostering or adopting do so for the same kind of reason that those who would prohibit loving homosexual couples from fostering or adopting do: a belief that these kinds of relationships are morally flawed.

One could also make an effective case that gender complementarity occupies such a central place in both marriage and parenting that incestuous and polyamorous partnerships are in some ways more defensible than homosexual couplings.

Moreover, incestuous couples could make the case that their desire to adopt reveals their sense of responsibility in that procreation could result in serious birth defects. Shouldn’t loving incestuous couples be allowed to have children? Is it fair to allow society’s prejudice to prevent them from this basic right?

And what about all the hard to place children waiting for loving homes? Doesn’t opposition to adoption or fostering by incestuous or polyamorous partners (to borrow the fatuous words from Chicago Tribune columnist Stephen Chapman), “mainly serve to harm children in dire need of stable, loving families”?

The Tribune points out that there are 57 other private agencies with “non-restictive” policies to which homosexual couples can apply for fostering licenses, but according to ACLU attorney Benjamin Wolf, “‘We don’t know for sure if a loving lesbian or gay family turned away from a discriminatory agency is necessarily going to go to another agency because of the disruption and harm caused to them.'” Perhaps those homosexual couples who are that emotionally fragile are not constitutionally suited for the arduous task of fostering.

Wolf also said that “limiting the pool of prospective foster care parents because certain religious traditions believe same-sex relationships are sinful is irresponsible when children are in need.” Homosexuals constitute between 2-4 percent of the population; the number of those who are in stable relationships is smaller; and the number of homosexuals in stable relationships who want to foster is smaller still. By allowing a few Christian agencies to prohibit homosexuals from fostering–homosexuals who may foster through other agencies–will result in a negligible impact on the pool of foster care parents.

Compare that to the impact on the pool of prospective foster care parents that will result when all theologically orthodox Christian agencies are forced to cease operations. Who’s really being “irresponsible”?

If we measure harm only in concrete, measurable ways — dirty house, lack of food, untended infections, emotional detachment — then we ill-serve the children we purport to care so deeply about. When organizations make decisions regarding the placement of children in families, it is not only appropriate but critical that they take into account the moral nature of the relationships of the potential caretakers.