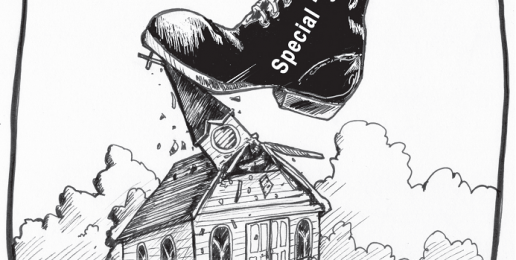 On February 4, 2009 openly gay State Representative Greg Harris (D-Chicago) introduced a bill to legalize same-sex “marriage” in Illinois. On February 18, 2009 — recognizing that homosexual “marriage” has very little support in the Illinois General Assembly, Rep. Harris introduced a compromise — homosexual “civil unions” bill. This bill was rammed through the General Assembly by razor-thin majorities during the last two days of the 2010 Veto Session (Nov. 30th in the House and Dec. 1st in the Senate). Fourteen of the seventeen lame duck lawmakers in the Illinois House voted in favor of this bill.

Pro-homosexual activists would have you believe that passage of same-sex “marriage” legislation here in Illinois would not affect you or your marriage. But the truth is that homosexual “marriage,” “civil unions,” and other special “gay” rights legislation are systematically eroding our First Amendment rights of freedom of religion and conscience.

We need to understand what is happening across our country:

Despite the fact that Illinois’ same-sex marriage bill is titled the “Religious Freedom and Marriage Fairness Act,” and the civil unions bill is titled the “Religious Freedom Protection and Civil Union Act,” they will negatively affect religious liberties and freedom of conscience. These bills will not protect our individual religious freedoms to object to homosexuality as public policy. In fact, Georgetown University lesbian law professor Chai Feldblum has stated publicly that when same-sex marriage is legalized, conservative people of faith will lose religious rights.

By yielding to the homosexual lobby and enacting counterfeit marriage bills and other special “gay” rights legislation, Springfield lawmakers have created official government policies that are negatively affecting our fundamental rights of religious freedom, speech and parental rights.

Count it a blessing if you don’t yet feel the effects of the gay agenda, but don’t allow that blessing to lull you into inaction. We must vigorously and courageously oppose every attempt to redefine marriage and the natural family. The essential task of protecting marriage, family and religious freedom is being made incalculably more difficult as the radical homosexual political agenda advances here in Illinois.

Click HERE TO SUPPORT Illinois Family Institute.
As little as $60 goes a long way toward protecting your values in Illinois!
Sign up as an IFI Ministry Partner for just $60/year, which is just $5 per month