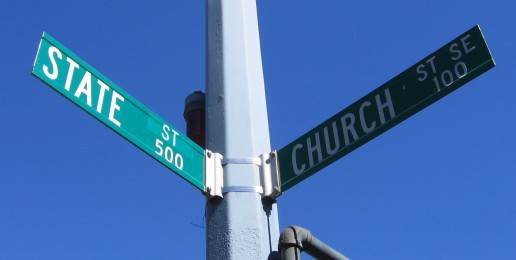 That seems a peculiar statement in light of the exchange below between State Senator William Haine (D-Alton) and the bill’s sponsor, State Senator David Koehler(D-Peoria), during a floor debate on this bill. Senator Koehler reads Senator Haine’s question from the hearing transcript, which begins with Haine quoting the civil union law:

Haine: “‘Nothing in this Act shall interfere or regulate with (sic) the religious practice of any religious body.’ Any religious body is free to choose whether or not to solemnize or officiate civil unions. Now, I take it from your comments that the intent of this bill is not to make that one item but two separate intents: the solemnization of civil unions is one sphere; the second sphere is religious practice, which includes a wide variety of things. Is that correct?”

Koehler: “Yes, that is correct.”

Haine: “So, we should not read them together as just referring to the act of solemnization of a civil union, right?”

Koehler: “If I understand your question correctly, yes.”

Haine: “Therefore, and this is part of the intent, this has been the worry of these institutions of faith of all denominations, Christian and Jewish. Go to their various agencies providing social services…adoption agencies, a wide gamut of things–so that’s covered under the first sentence (of the civil union act)?”

Koehler: “Yes. The intent is not to at all impede the rights religious organizations have to carry out their duties and religious activities.”

McEwen also said “There is no meeting of the minds” regarding the foster care and adoption contracts. McEwen is right: There can be no meeting of the minds between Catholic Charities, whose leaders think rationally and morally, and those at DCFS who evidently do neither. No child welfare agency–religious or secular–should place children in homes in which the caregivers embrace and affirm sexual immorality.

McEwen’s fatuous and absurd claim is that since Catholic Charities will not agree to violate their religious convictions by placing children in the homes of self-identified homosexuals, they are in violation of the Religious Freedom Protection and Civil Union Act. Seriously?

The law is called The Religious Freedom Protection and Civil Union Act. Did McEwen not notice that the protection of “religious freedom” occupies the primary position in the law’s title?

Homosexuals, their ideological allies, (and the cowards who refuse to oppose them) exploit children yet again in the service of advancing their selfish goals. They make the patently deceitful claim that they’re centrally concerned with the welfare of children in desperate need of homes — all the while displacing 2,500 children.

As I wrote earlier, Benjamin Wolf of the ACLU argues that “limiting the pool of prospective foster care parents because certain religious traditions believe same-sex relationships are sinful is irresponsible when children are in need.”

What does DCFS’ decision mean for Illinois? It means religious liberty loses; children lose; and the integrity of Illinois lawmaking (if that’s not oxymoronic) loses.

So, who wins? Homosexuals win. Homosexuals’ narcissistic desires take precedence over religious liberty, children, and the integrity of the lawmaking process.

In a short article titled “How to Destroy a Culture in 5 Easy Steps” that appears on the First Things website, Joe Carter writes about the ways policy issues can move from politically unthinkable to radical to acceptable to sensible to popular and then finally become enshrined in policy.

This process, Carter contends, can be reversed, so that something entrenched in policy can become unthinkable. Carter warns, however, that such a reversal “requires a people who have courage and conviction and a willingness to be despised for the truth. Do current generations have such virtues? Probably not. But I’m holding out hope that our grandkids will be born that way.”

Let’s hope that we don’t have to wait that long. Let’s hope and pray that conservatives muster the willingness to be despised rather than continue seeking ways to rationalize cowardice.

Take ACTION: Send an email or a fax to Illinois Governor Patrick Quinn and DCFS Director Erwin McEwen asking them to cease their attacks on religiously based foster care agencies. Politely point out that Catholic Charities are within their First Amendment rights to disqualify those applicants who self-identify as homosexual.

Government Must Support and Encourage Free Exercise of Religion, or Fail
b
a
x
r